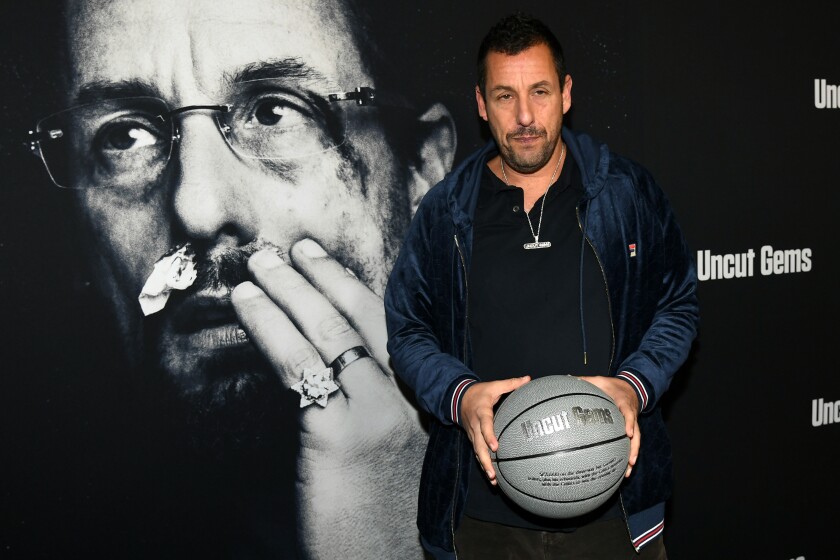 We squeamishly screened the new Adam Sandler ultra-dark drama, “Uncut Gems,” out already in L.A. with a national release on Christmas Day, and dribbled out of our theater seat feeling like dissected phlegm.

It offers no redemptive escape from sports gambling at its most wretchedly addictive. Its anguishing, rueful story arc focuses on Sandler’s Howard Ratner. The New York Diamond District jeweler is obsessed with cashing in on cues he picks up from Boston Celtics star and client Kevin Garnett, who himself is obsessed with the perceived mystical powers of an Ethiopian black opal that Ratner has procured.

Ratner’s shell game, an attempt at getting himself out of a perpetual financial hole, leads to large wagers on games during Garnett’s playoff performance against Philadelphia in the 2012 Eastern Conference semifinals.

It’s not based on any true story, although extensive ESPN footage used in the movie gives it shuddersome authenticity. The script, we’re told by screenwriters and co-directors Josh and Benny Safdie, was created around those games, not because of them.

Yet the truth about sports gambling as it becomes more normalized with evolving state-by-state laws is that Sandler’s character has to be a cautionary tale.

“Gambling is an optimist’s addiction,” says Josh Safdie. “Betting makes it feel personal in some weird way. But it can ruin people’s lives, no doubt about it.”

“Gambling puts more weight on a game,” adds younger brother Benny. “We wanted to make a movie where people felt as if they were as invested in basketball games as we are.”

The Safdies confess to being die-hard New York-based Knicks fans. They’re wise enough not to bet on their team’s success.

“I’m too invested with my heart to know not to gamble because I wouldn’t make smart bets,” admits Josh.

As he puts a pack of Marlboro cigarettes on the table in the sixth-floor suite of the Four Seasons Hotel in Beverly Hills during the media junket, Josh remarks that “addiction is addiction, like nicotine. Most sports fans aren’t gambling addicts. It’s just something to do that’s fun and makes the games they’re watching fun.”

“It’s ‘the beauty of betting,’ as Howard says” in the film, Benny chimes in. “But in this case, the guy gambles on all aspects of his life.”

If in previous films such as “Fever Pitch,” “Two for the Money” and “The Color of Money” the sports-adjacent lifestyle was glamorized to various degrees, “Uncut Gems” does no such thing. It’s a good bet Sandler’s performance, both gritty and naive, will receive more recognition during the upcoming awards season.

Remember when NBA coach Stan Van Gundy used to complain in the media about having to work on Christmas Day?

“I actually feel sorry for people who have nothing to do on Christmas Day other than watch an NBA game,” he said in 2009, drawing a league fine.

For the last 18 seasons, ESPN/ABC has given the NBA a gift-wrapped Christmas platform. This year’s five-game slate and 15 hours of programming are highlighted by the Lakers-Clippers contest from Staples Center at 5 p.m. PST, simulcast on both channels.

We have guilt pangs watching media folk such as Stan’s brother, Jeff Van Gundy, giving up a holiday to come all the way to L.A. for this broadcast with Mike Breen, Mark Jackson and Lisa Salters. Stan Van Gundy, now a TNT analyst, gets the day off.

“Everyone would like to only have good parts of their job,” Jeff Van Gundy said the other day. “But when you have a really good job, there will be some inconvenient parts, and working on a holiday is one of them. You know, c’mon. I’ll be in L.A. doing an unbelievable game. I don’t think there’s too many people who should be feeling sorry for me.”

Van Gundy rebounded with this thought: What if the NBA used the holiday as its annual rollout, as it did (by accident) after the 2011 lockout?

“For those who think the NBA regular-season schedule is too long, having Christmas as an official start day and ending later in the summer, you can make a great case for it,” said the 57-year-old who now has logged more seasons as a TV analyst than the 11 he had as head coach in New York and Houston from 1996 to 2007.

“I hate when I read: The regular season doesn’t matter, it only matter what happens in the playoffs. That’s a dangerous mind-set for anyone in our league. What you’re saying to the consumers is: Don’t watch until it ‘matters.’

“When the media says a regular-season win in March isn’t the same as what we’ll see a team is made of in the playoffs, you’re telling the consumers not to watch. And I worry they’ll listen and not watch.”

With all the media dart-throwing to pick reasons why the NBA national TV ratings to date are more than 20% below last season, maybe there’s your prime-time answer.

Producers of the IFC series “Brockmire” announced there will be a fourth and final season starting in March 2020.

The extension of a truly inspired FunnyOrDie.com video about a washed-up baseball broadcaster played by Hank Azaria has taken a hard left into the character’s dark, sinful and narcissistic lifestyle. Not a lot of funny is left. Probably best to let it die.