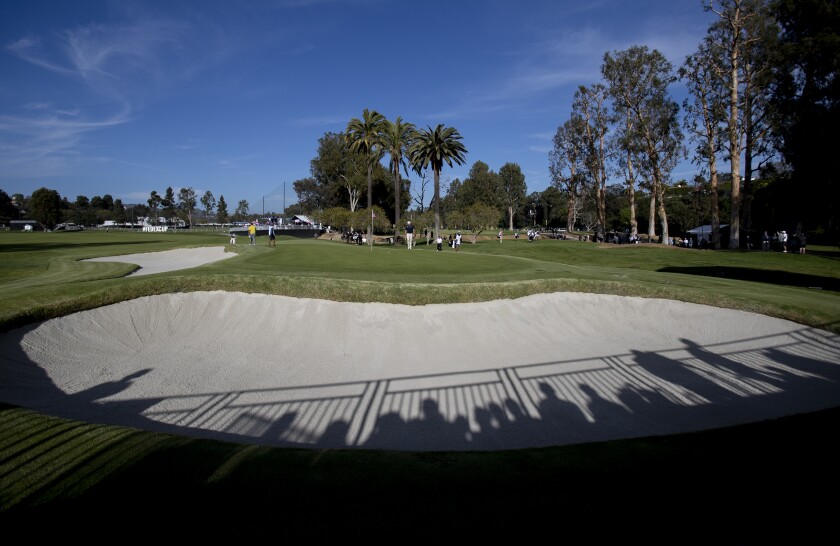 10th hole dilemma at Riviera for Genesis Invitational: Lay up or go for the green?

The hopeful thinking on the tee of the 10th hole at Riviera, a kidney-shaped par-four of 302 yards: “OK, little cut on this drive, hold off a bit, I’m looking at a 12-foot putt for eagle.”

The likely reality on the 10th green: “OK, settle down, and hit this testy three-footer in the back of the cup and I’ll take my par.”

No. 10 is one of the most enticing holes in golf, a par four with a green so close you can almost touch it from the tee.

Rory McIlroy also believes in going for the green.

“This is possibly the best driveable par-four in the world,” he said. “It’s just as easy to make a six as it is to make a three, but all the statistics suggest that if you do go for the green, you’re going to play the hole three-tenths of a shot lower than if you lay up.”

The greatest danger is to the right of the hole. Recovering from the right bunker to a green not much wider than a pencil is daunting. That’s why Justin Thomas usually backs off. He routinely lays up with a 4-iron to a 6-iron off the tee.

“My miss with a 3-wood or sometimes a driver is right, and that’s no good up there,” he said this week. “I’m just trying to make a four and maybe sprinkle a three or two.”

The hole is part of the Aon Risk Reward Challenge, which takes each player’s best two scores on one hole each week, the player with the lowest average for the season winning $1 million.

“When it plays the way it’s supposed to, which is firm and fast, it usually plays just over par,” Finau said. Finau bogeyed the hole in the opening round after driving into the front-left bunker.

McIlroy hit his tee shot into a greenside bunker, his second shot into a bunker across the green, then managed to get up and down for par. Thomas played short, hit a wedge to three feet and birdied the hole.

Long before the tragic death of Kobe Bryant, Brooks Koepka had planned to wear purple-and-gold golf shoes in homage to the Lakers star. Bizarre as it sounds, Koepka said he helped design them months ago.

“I had sat down with Nike last fall, I think it was October, maybe September…” Koepka said after his round Thursday. “I was always a big Kobe fan. He was very impactful on my life. I never met him, but it was something we wanted to do. We came up with the idea back then, and it was crazy.”

Koepka was hoping to give the shoes to Bryant when he came to Los Angeles for the tournament. He was in Dubai, taking his girlfriend to the airport around midnight when the Bryant news broke.

“I saw the helicopter went down and saw the news, which was quite shocking, I didn’t believe it,” he said. “I was kind of half asleep and really didn’t understand what was going on.”

Koepka texted a Nike rep and said, “We’ve got to do something,” forgetting about the shoes he helped design. He now plans to donate them to a charity in hopes of raising money for the other victims who died in the crash.

“I’ve never cried over anybody I’d never met,” he said. “And that was the first time.”