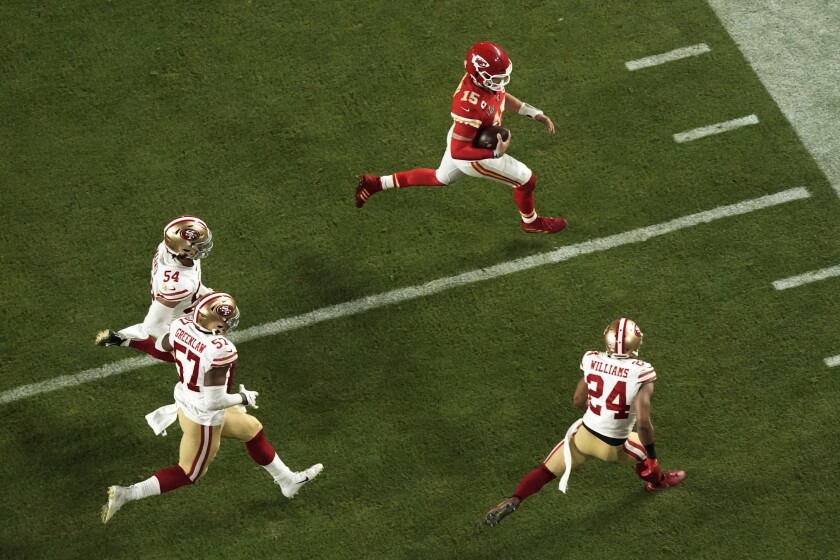 The San Francisco 49ers and quarterback Jimmy Garoppolo came through in similar situations this season.

They overcame fourth-quarter deficits for dramatic victories over the New Or-leans Saints and the Rams.

Pulling off that feat in the Super Bowl, however, is another challenge altogether, especially against a Kansas City Chiefs team led by the transcendent Patrick Mahomes.

“We just didn’t make some of the plays we normally make,” Garoppolo said. “So it’s a tough one.”

Or, as tight end George Kittle put it, “Losing sucks. Losing on the biggest stage is not fun.”

It was particularly disappointing for Kyle Shanahan, the 49ers’ third-year coach who had his team on the verge of possibly winning the sixth Super Bowl title in franchise history.

Sunday’s loss did not approach the Super Bowl meltdown the Atlanta Falcons experienced three years ago when Shanahan was the team’s offensive coordinator. That team blew a 25-point second-half lead en route to a humiliating defeat to the New England Patriots from which the Falcons have yet to recover.

Mahomes has not yet built the resume of Patriots quarterback Tom Brady, but the 49ers could not stop the third-year pro from making key plays when they needed to most.

“They’re not a team that does it every drive,” Shanahan said of the Chiefs. “They get a little bit hot and cold and they can score very fast…. They know it’s a matter of time.”

The score was tied, 10-10, at halftime and the 49ers kicked a field goal on the first drive of the third quarter.

The 49ers defense kept the momentum when linebacker Fred Warner intercepted a pass by Mahomes. Garoppolo took over from there, completing several passes before Raheem Mostert scored on a short run for a 10-point lead with less than three minutes left in the third quarter.

The 49ers appeared set to blow open the game after defensive back Tarvarius Moore intercepted a tipped pass on the ensuing series. But this time the 49ers could not sustain a drive.

“The turning point in the game was when we got a turnover and then we didn’t execute on offense,” Kittle said, “and they got the ball right back and drove it.”

Mahomes pulled the Chiefs to within three points with a touchdown pass to tight end Travis Kelce.

The 49ers got the ball with just more than six minutes left and went three and out, setting up Mahomes for another drive.

Garoppolo got another chance and moved the 49ers to near midfield. But Chiefs tackle Chris Jones batted down a first-down pass, Garoppolo’s next pass fell incomplete, and Garoppolo overthrew receiver Emmanuel Sanders on a deep route.

On fourth down, Chiefs linebacker Frank Clark sacked Garoppolo, ending any threat of a comeback.

“Those are the moments you dream of and everything,” said Garoppolo, who completed 20 of 31 passes for 219 yards. “We got rolling on a right note and just couldn’t finish it off.”

Veteran tackle Joe Staley, 35, also played for the 49ers team that lost in the Super Bowl against the Baltimore Ravens in the 2012 season.

So the disappointment over Sunday’s defeat was magnified.

“You put your heart and soul and your entire life into trying to be a Super Bowl champion, and you get toward the end of your career and you realize how rare these opportunities are,” he said.

Shanahan said the 49ers would recover from the defeat.

“We’ll lick our wounds and we’ll get over this,” he said.

“We’ll be fired up for next year…. We get almost all of these guys back and plan on adding a few more.”