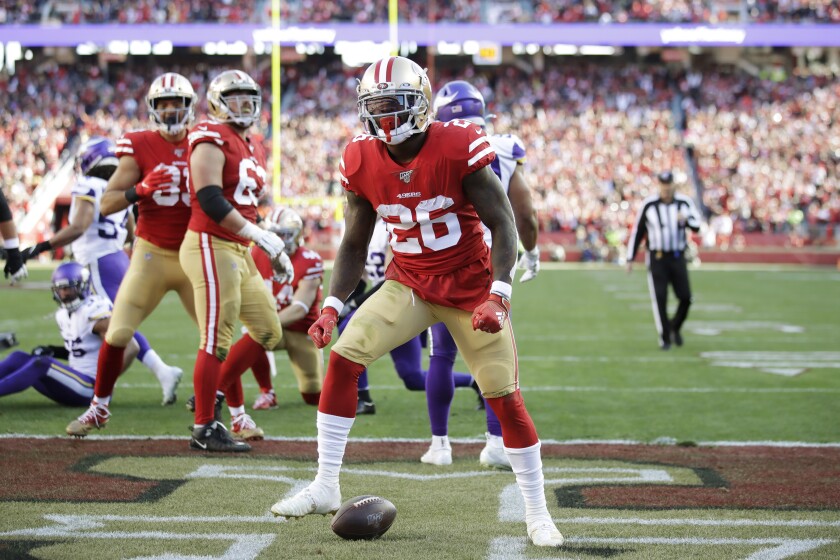 He had engaged the defender three yards earlier and then, in a moment equally shining and symbolic, shoved the poor guy straight backward and onto his fanny.

And he was dropped by, of all things, a quarterback.

That’s how convincingly San Francisco ran over Minnesota in a 27-10 NFC divisional round playoff victory Saturday at Levi’s Stadium.

“It felt good,” Jimmy Garoppolo confirmed later of his highlight block on Anthony Barr. “Sometimes you have to remember that you’re not just a quarterback, you’re a football player.”

All the 49ers were football players Saturday — with the emphasis on foot — as they rushed 47 times for 186 yards and built a possession-time advantage of nearly 17 minutes.

The Vikings didn’t even have 47 offensive plays total, counting runs and passes, finishing with 45. They also generated only seven first downs and didn’t pick up their first first down of the second half until the final five minutes.

By the time the pounding was over, Minnesota’s defense was visibly unraveling just a week after controlling future Hall of Fame quarterback Drew Brees and New Orleans’ vaunted offense in an overtime wild-card win.

All the work on the ground allowed the 49ers quarterback to ease into his first NFL postseason experience.

Barely five minutes into the game, he connected with wide receiver Kendrick Bourne for a three-yard touchdown and a 7-0 lead.

Garoppolo would complete only six more passes the rest of the day, finishing 11 for 19 for 131 yards. Of the 35 plays the 49ers ran after halftime, 29 were runs.

That’s not counting the second-quarter reverse that had Garoppolo out in front of ballcarrier Deebo Samuel, a wide receiver.

The six-yard gain ended with Garoppolo toppling Barr, a former UCLA standout, as if he has been lead-blocking his whole life.

“I saw that out of the corner of my eye,” San Francisco right tackle Mike McGlinchey said. “I mean, Barr’s a hell of a player. He put him on his butt. That’s a pretty good deal. Maybe we’ll put him in at fullback at some point.”

The 49ers now will host the conference title game Jan. 19. They will play the winner of Sunday’s Green Bay-Seattle matchup.

Regardless of which team arrives here next, San Francisco couldn’t execute any plan much better than this.

On their final touchdown drive, the 49ers went 44 yards in eight plays, all of which were runs to open a two-score lead in the third quarter.

“When you can do that against a team that’s loading the box, that’s how you take over football games,” McGlinchey said. “We looked at the still shot of that play, and the whole thing was walled off. That’s how you dominate.”

Through its nonstop bullying, the San Francisco offense helped the defense smother Kirk Cousins and the Vikings. Cousins was sacked six times, and Minnesota rushed for only 21 yards.