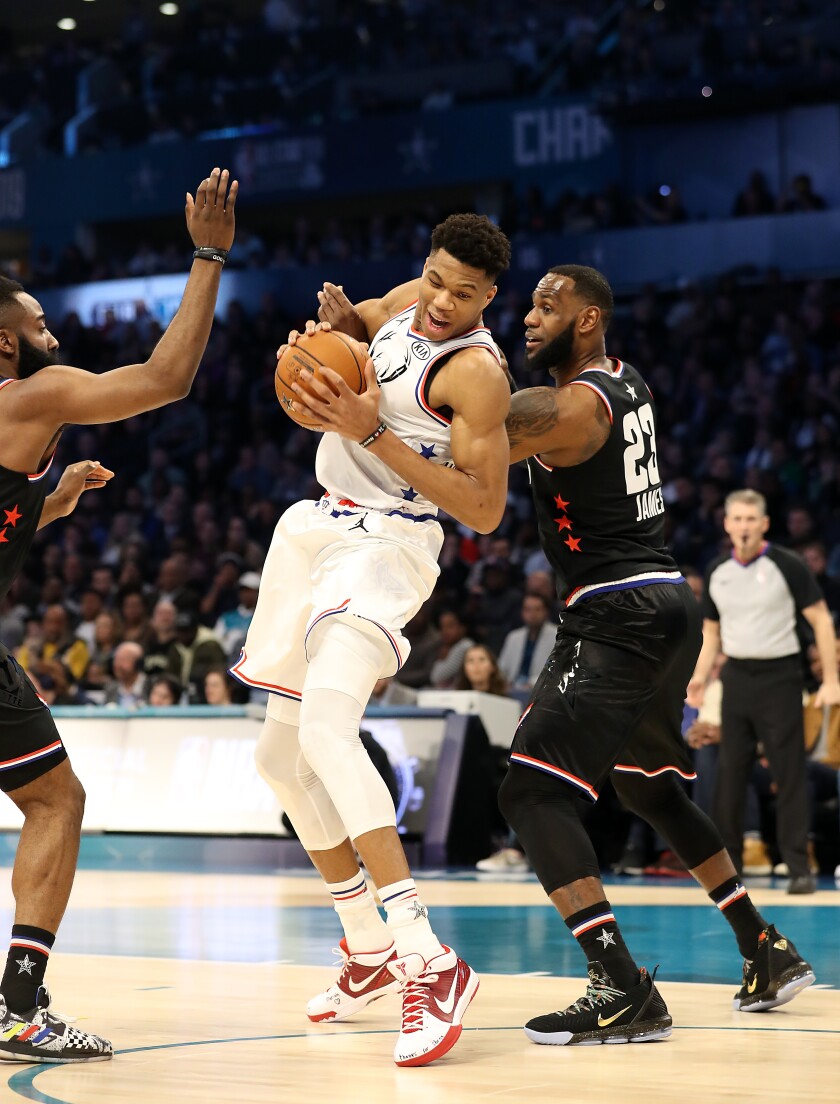 A look at potential All-Star starters, reserves and snubs

The fans are voting on NBA All-Stars through Monday. Players, coaches and some members of the media will be next. The league will announce the results and the 10 starters Thursday for the Feb. 16 game in Chicago. Reserves, chosen by the league’s coaches, will be announced Jan. 30.

Some of the choices are easy, especially at the top of the West. Some are tougher because of injuries, load management and uneven records muddying up the decisions.

The top vote-getters in each conference will be captains who choose teams from the pool of starters and then reserves regardless of conference affiliation.

Here’s a look at how things should shake out over the next two weeks.

There might not be two easier choices than the Lakers’ stars. Both have been incredibly reliable — Davis’ recent injury notwithstanding. James has been dynamic as a playmaker and has returned to an MVP level for the West’s best team. Davis has been prolific by scoring at least 40 points in four games.

Right behind them are two more easy selections in Harden and Doncic. Harden’s output is staggering. He’s scored at least 40 points 16 times this season and continues to redefine offense in the NBA. Doncic has been revelatory in year two in Dallas, the closest thing offensively to a mixture of Harden and James.

That leaves the final spot, which could very easily go to either Utah’s Rudy Gobert or Denver’s Nikola Jokic. Neither is better than Kawhi Leonard, but neither has missed 10 games in the first half of the season. Still, this is a game that rewards stardom and players performing at their best, and right now, Leonard is well ahead of those two. He deserves to be one of the five from the West who get to start the game.

Injuries to Stephen Curry and Klay Thompson and a recent 15-game absence for Karl-Anthony Towns should open the door for some first-time All-Stars. Ingram and Mitchell should be pretty safe bets. Lillard, even with Portland’s struggles, should be on the team, and Gobert and Jokic are locks.

That leaves two spots. The first should go to Paul, who has the Thunder in playoff position and has to have Oklahoma City reconsidering their position as the Feb. 5 trade deadline approaches. The second should belong to Booker, who is shooting better than 50% despite being the focal point of every defense that the Phoenix Suns face.

The toughest omissions: Paul George (too few games), Russell Westbrook (not as efficient as Booker), Ja Morant and Shai Gilgeous-Alexander (their time is coming).

The top spot in the East — Antetokounmpo’s — is the easiest and possibly the only obvious choice of the starters in the conference. The Bucks are a juggernaut and the reigning most valuable player has upped his game yet again. He’s got a legitimate claim to the unofficial “Best in the World” title.

Embiid is the game’s best center. He should be just fine after he gets back from a finger injury. Butler has been the best thing on the surprising Miami Heat and has played better than his terrific all-around numbers suggest.

Both guard spots are debatable, with Young getting the nod because of his spectacular numbers even if they’ve come without winning. Walker’s there because he’s been a leader on the Celtics to go with his usual production. Bradley Beal is probably next in line for a starting spot.

Had it not been for a groin injury that kept him out for three weeks, Siakam would have been a starter in this game. He’s been terrific, happily filling the void created when Leonard signed with the Clippers. Similarly, Adebayo’s been a star after Hassan Whiteside‘s departure to Portland and is deserving of his first All-Star nod.

Jaylen Brown or Jayson Tatum would be deserving, with Brown getting a slight nod here because of what he does on the defensive end. Beal and Simmons are a lock. Either could be starters.

Sabonis might be a surprise choice, but he’s been awesome this season for the Pacers as an efficient scorer, a terrific rebounder and a good passer.

The toughest omissions: Jayson Tatum (can’t have a third Celtic), Kyle Lowry (gets pushed out by a hair), Spencer Dinwiddie (same as Lowry) and Andre Drummond (he’s the league’s leading rebounder, but Sabonis has been better).