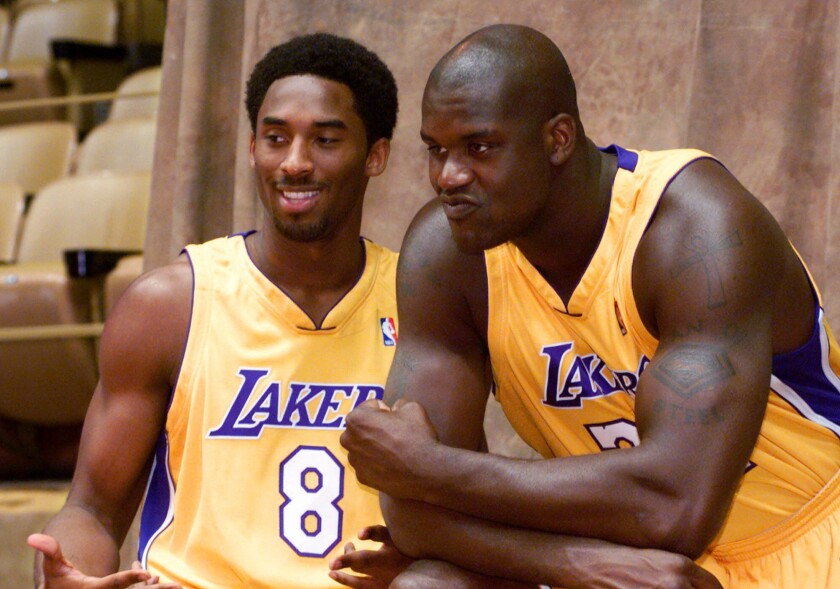 Shaquille O’Neal sat in a chair at center court inside Staples Center wearing a gray suit with tears streaming down his face as he talked about dealing with the death of his friend and former Lakers teammate Kobe Bryant.

O’Neal and the acclaimed TNT crew of Ernie Johnson, Charles Barkley and Kenny Smith along with quests Jerry West, Dwyane Wade and Reggie Miller had come to Los Angeles on Tuesday to pay tribute to Bryant in an hourlong show called “Remembering Kobe.”

O’Neal struggled to come to grips with Bryant, his 13-year-old daughter, Gianna, and seven others perishing when their helicopter crashed into a Calabasas hillside Sunday.

“The fact that we lost probably the world’s greatest Laker, the world’s greatest basketball player ...” O’Neal said. “Listen, people are going to say take your time and get better, but this is going to be hard for me. I already don’t sleep anyway. But I’ll figure it out. My condolences goes out to family, his mom, his dad, his sisters, the other families, everybody involved, the Lakers organization ...

The acclaimed TNT pregame show had already planned on broadcasting from Staples Center on Tuesday for the highly anticipated game between the Lakers and Clippers, but the contest was postponed Monday by the NBA.

“I haven’t felt a pain that sharp in a while.. it definitely changes me.”’@SHAQ on the loss of his brother, Kobe. pic.twitter.com/dM5i0DDgGK

O’Neal said when one of his nephews delivered him the news about Bryant’s death Sunday, “I snapped at him,” telling him to “get that out of my face.”

“And then we found out it was confirmed,” O’Neal said. “And I haven’t felt a pain that sharp in a while. Forty-seven years old. I lost two grandmothers, lost Sarge [stepfather Sgt. Phillip Harrison], lost my sister, but now I’ve lost a little brother. Our names will be attached together for what we did.”

O’Neal said he felt “a triple stabbing to the heart,” when he read that Rick Fox was on the helicopter. Fox was not.

“And then the final blow,” O’Neal said. “His lovely daughter was with him on the helicopter.”

O’Neal said he was looking forward to attending the Hall of Fame ceremony this summer to see Bryant get inducted.

Bryant and O’Neal were Lakers teammates for eight seasons, with the 17-year-old Bryant being acquired after Charlotte drafted the guard 13th overall in 1996. It was another deal put together by then-Lakers general manager West, who got the big center to come on board the same summer as a free agent.

Bryant and O’Neal won three consecutive NBA championships together from 2000 to 2002 and reached the NBA Finals four times in five years.

But the two alpha males bickered along the way, their feud leading to O’Neal being traded to the Miami Heat after the 2004 season, a deal that many perceived as Bryant wanting O’Neal gone or the Lakers would risk losing Bryant as a free agent that summer.

“I’ve been looking at the internet, and people like to talk about the relationship. I’m here to set it straight,” O’Neal said. “It was a big brother relationship, little brother. I have a real brother in real life, and we argue all the time. I have an older brother in Charles Barkley, we argue all the time. But the respect was there. And if you don’t believe that the respect was there, after I won my first championship [in 2000], who was the first guy to jump in my arms? When the guy twisted his ankle in the NBA Finals [in 2000] and couldn’t walk, who was the guy that carried him down the hall?

“So, from now on, I don’t want to hear about the beef that ya’ll thought we had. This man [West] knows our true relationship. We practiced, we played together. When we stepped inside the lines, we wanted to win. We both wanted to win.”