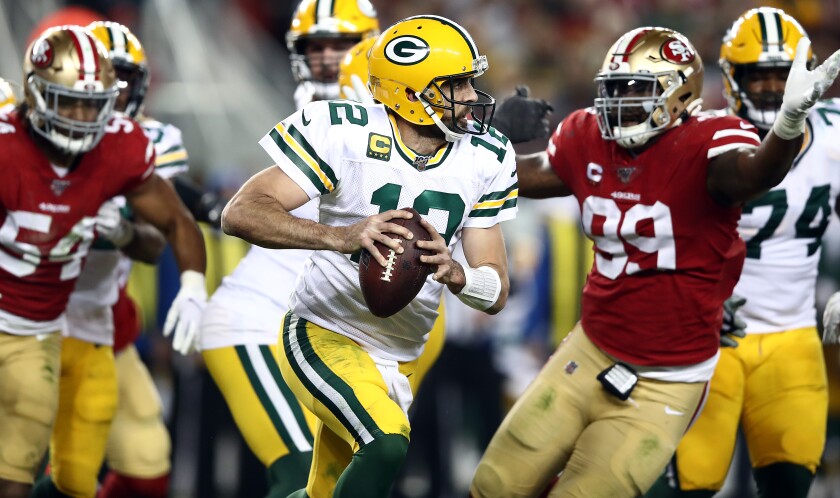 Aaron Rodgers and Packers hope to reverse outcome against 49ers

They fumbled away their first possession, fell behind before the game was two minutes old and never threatened on a night when the history-making Aaron Rodgers was historically unproductive.

The Green Bay Packers’ jarring and stunningly one-sided 37-8 loss at San Francisco meant a whole lot back in November.

Will it mean anything Sunday?

Eight weeks after they left Levi’s Stadium as smeared as grass stains, the Packers return to the scene of the grime for the NFC championship game and a berth in Super Bowl LIV.

Coach Matt LaFleur spent the last week explaining that his team had to learn from that defeat, had to study what went wrong to better ensure things go right Sunday.

For the 49ers, the takeaway was to toss away the result.

The Packers sure did. On their 70 offensive plays, they averaged only 2.8 yards per snap. They failed to convert 14 of 15 third-down plays. They permitted San Francisco to score on seven of 11 possessions.

Rodgers, guilty of that opening-series fumble, was sacked five times and finished 20-for-33 passing for only 104 yards. That works out to 3.15 yards per attempt, his lowest output in 191 NFL starts, including the playoffs.

For those who enjoy revealing statistics, the Elias Sports Bureau issued a juicy one this week:

During the Super Bowl era, there have been 36 playoff rematches featuring a team meeting an opponent it lost to by at least 25 points during the regular season. Those teams rebounded to win 14 times.

So it won’t take a precedent-setting performance from Green Bay. It is worth remembering that 49ers edge rusher Dee Ford and linebacker Kwon Alexander missed the November game because of injury.

All the Packers need to do Sunday is be the same team that has gone 6-0 since that loss and completely dismiss their two West Coast trips during the regular season.

Along with their miserable night at San Francisco, they also were shoved around in November during a 26-11 defeat to the Chargers in Carson. That was the same Chargers team that would win only one more game.

Two losses by a combined score of 63-19 in the state of California? For a bunch that has dropped only one other game all season?

That seems illogical, particularly since the Packers’ success depends so much on Rodgers, who played at Cal and was born in Chico, about 200 miles from Levi’s Stadium.

His looming presence is reason enough, the 49ers insist, to temper any results from two months ago.

Shanahan said he recalled the concern welling inside him when Green Bay finally scored in the second half in November to close to within 15 points.

“It’s 23-8 halfway through the third quarter,” he said, “and I think it’s a tight game because of who is over there at quarterback. He’s never out of the game.”

Former San Francisco defensive line coach Jeff Zgonina had a phrase to describe the way Rodgers could deliver the ball, especially on those occasions when he’d scamper about and extend plays waiting for someone to come open.

Defensive tackle DeForest Buckner recalled talking to Zgonina about it last season before these teams met in October on Monday Night Football, a game the Packers would win 33-30 at Lambeau Field.

"[He] would call it the wrist flick from hell,” Buckner said. “He would get that little — kind of like avoiding rushers and everything and just — you see that wrist flick, and you’re like, ‘Oh, Lord.’ Know what I mean? You know somebody is going to come down with it. Yeah, he’s just a special player.”

The 49ers will counter with a quarterback they, too, believe has special qualities. Jimmy Garoppolo is 22-5 as an NFL starter and such a force in the Bay Area that people walk around here wearing T-shirts bearing his favorite slogan: “Feels Great, Baby.”

Garoppolo didn’t have to do much last weekend in San Francisco’s 27-10 win over Minnesota. After an impressive, touchdown-producing opening drive, the 49ers kept the Vikings down by running the ball 47 times.

It made for a shockingly comfortable afternoon for a team that had its previous five games decided on the last play or in the final seconds.

“It was great to finally not have a heart-attack game,” left tackle Joe Staley said. “That was a great recipe for winning football.”

A week later, San Francisco will attempt to duplicate that performance.

Eight weeks later, Green Bay will try to change things completely, to turn a laugher into a last laugh.