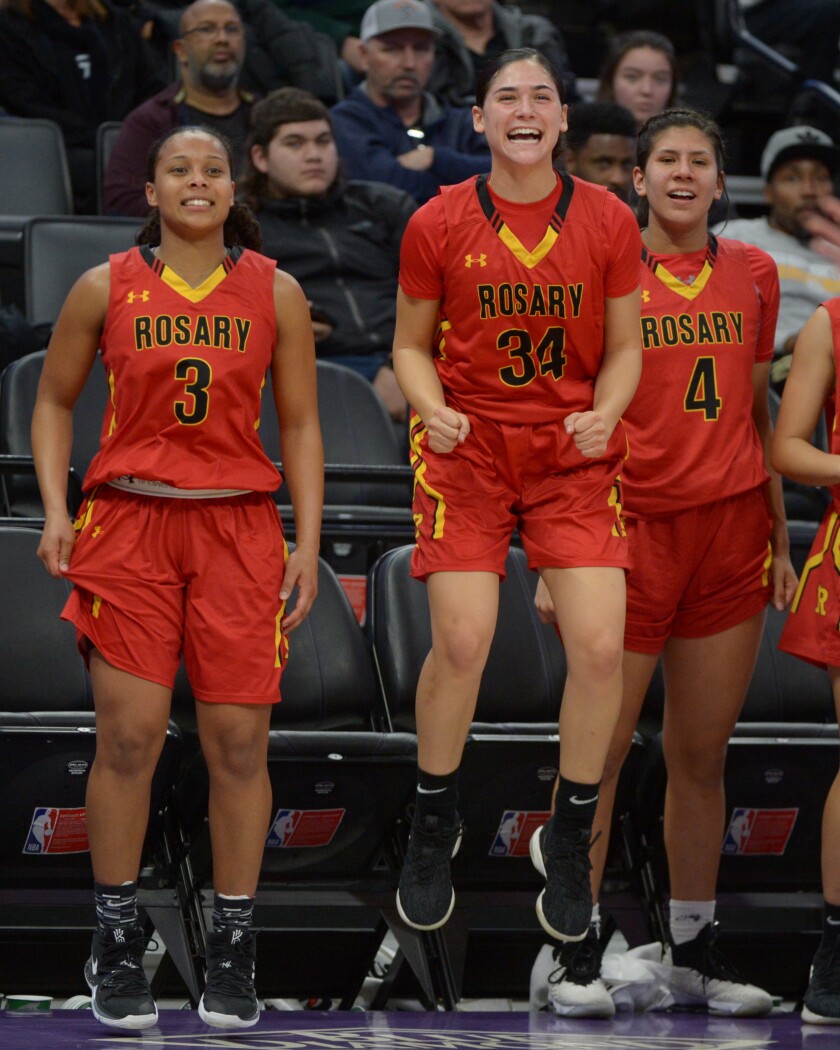 Nicole Rodriguez, a senior basketball player at Rosary Academy in Fullerton who signed with Loyola Marymount, is earning respect for the way she plays the game.

Her athletic career began on the baseball diamond when her father, Enrique, enrolled her in youth baseball in Eastvale. The sport is a family tradition. She played travel ball for five years and freshman ball at Norco High School. At 12, she filled her father’s heart with golden memories such as hitting two home runs over a 220-foot fence at a tournament in Cooperstown, N.Y. As a catcher, she was involved in a collision at home plate that resulted in the baserunner crying. Enrique said the boy was probably crying out of embarrassment.

Coaches say competing with boys in baseball helped Rodriguez quickly become a scholarship player in basketball, a sport she started playing in the seventh grade.

Mater Dei coach Kevin Kiernan said Rodriguez shows a toughness on the court that seems to have come from playing against boys in baseball.

“She rises to the challenge,” Rosary coach Richard Yoon said. “It’s the same thing as playing baseball with the boys.”

Baseball is at the heart of Rodriguez’s persona. The bedroom of her Eastvale home is decorated with the pennants of all 30 Major League teams and a life-size cut out of Dodgers star Clayton Kershaw.

“If she had her choice she would be going to college on a baseball scholarship,” said Enrique Rodriguez. “Baseball is her first love.”

Norco baseball coach Gary Parcell said some boys whom Rodriguez beat out for the freshman team “were embarrassed because she was better than them.”

However, Rodriguez recognized that boys were going to grow bigger, faster and stronger than her so her baseball future was limited. She went out for softball as a sophomore at Norco and played outfield for the 2018 team that won the Southern Section Division 1 title.

“Her baseball skills were a big asset on defense and because of baseball she had great instinct on the bases,” Norco softball coach Rick Robinson said. “The biggest adjustment was hitting. She had to learn the different rotation on the ball. In a short time, she picked that up too.”

She played basketball for two years at Norco High.

Her zeal for the sport grew after she received her first recruiting letter from Cal State Northridge. Letters from UC Irvine, UC San Diego, California and Utah followed.

She left Norco and its powerful softball program in 2018 to pursue her future in basketball at Rosary. She said she chose to transfer to Rosary because “it would be more challenging, in the classroom and on the basketball court. I wanted to be a better player and learn the game.”

The rigors she put herself through to play baseball have helped her endure early morning workouts at 24 Hour Fitness in Eastvale, long drives to Fullerton and early evening workouts with a personal trainer in Orange County in addition to school work and basketball practice. She carries a 3.8 grade-point average.

Rodriguez will be a focal point for opponents to guard during her senior season. She averaged 13.5 points per game last season.

“Easily one of the best players in the OC and the Trinity Legaue,” Kiernan said. “Very strong guard, good shooter, has the ability to create her own shot. Very tough to prepare for. She makes difficult shots.”