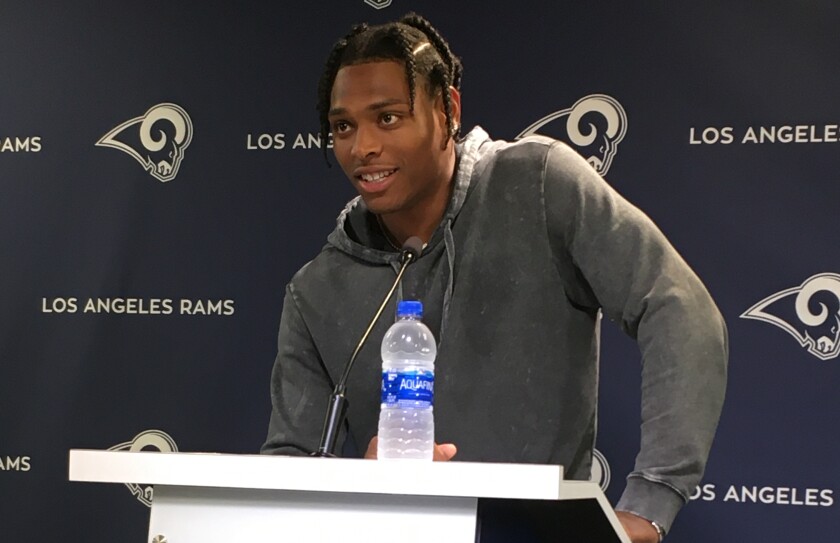 After making three trades, Rams ecstatic to have All-Pro Jalen Ramsey in their corner

His day began in Florida at 5 a.m., included a cross-country flight to Los Angeles and then a physical with Rams team doctors off site from the team’s Thousand Oaks facility.

When Jalen Ramsey finally arrived at Cal Lutheran around 7 p.m., he was not complaining.

“It’s all good,” he said Wednesday during a news conference.

That’s how the Rams feel about their acquisition of the 24-year-old Ramsey, who is regarded as one of the NFL’s best cornerbacks.

Ramsey was the grand prize from general manager Les Snead’s frenetic day of dealing on Tuesday, when he traded cornerback Marcus Peters and a draft pick to the Baltimore Ravens for linebacker Kenny Young, and traded a draft pick to the Cleveland Browns for offensive lineman Austin Corbett.

Those deals were mere precursors to Snead sending two future first-round draft picks and a fourth-round pick to the Jacksonville Jaguars for Ramsey.

The Rams are 3-3 overall and mired in a three-game losing streak heading into Sunday’s game against the Atlanta Falcons at Mercedes-Benz Stadium. Snead, coach Sean McVay and Rams players are optimistic that the addition of Ramsey will help them emerge from their slump — and become a cornerstone of the defense for years to come.

The 6-foot-1, 208-pound Ramsey is big, strong, fast and utilizes his long reach to thwart receivers.

“There are only a few players like that,” Snead said. “He happens to be one of them.”

Ramsey became available after months of apparent acrimony over his situation with the Jaguars. Ramsey is earning $7.4 million this season, and the Jaguars exercised their fifth-year option for $13.7 million in 2020. But Ramsey made his feelings known about an extension when he arrived at training camp in an armored truck.

He also got into a sideline argument with coach Doug Marrone during the Jaguars’ second game, and reportedly asked to be traded. Ramsey sat out the last three games because of a back injury, illness and what had been the pending birth of his child.

He said his phone “started blowing up” when the Rams traded Peters, and that he was at home, “chilling, eating tacos,” when he was informed that he had been traded to the Rams.

“I don’t think I ate another taco the rest of the night,” he said.

Will the Rams be a better fit for him than Jacksonville?

Ramsey likes the Rams’ defense and philosophy. “I heard the coaching here is dope,” he said, and the youth that permeates the organization.

“I’m a young guy still,” he said. “Everybody around here’s kind of young. I feel like it’ll be like a little bit more understanding.”

McVay said he was not concerned about how Ramsey would fit into the Rams’ locker room.

“You want guys with some swag, some personality, different things like that,” McVay said. “As long as those guys love football, they love competing every single day, I think usually this is a building that I think will suit him well.”

Whether Ramsey plays Sunday against the Falcons remains to be seen.

“We’ve got to be very intentional on how we utilize him,” Snead said.

McVay indicated that he expected Ramsey would be available.

Ramsey sounded as if he intended to play.

The addition of Ramsey has short- and long-term implications for the Rams on the field and on the business ledger.

Snead said he spoke with Ramsey’s agent when the deal with the Jaguars was in place. Asked if there was a timeline in place for Ramsey to receive an extension, Snead initially said no, but then added, “We did put a timeline a little bit in place with it.”

Ramsey said he was not worried about it.

“I have full confidence in my abilities and I think I can continue to be the best corner in the league for years and years and years to come,” he said. “So it will handle itself.”

Rams edge rusher Dante Fowler and backup quarterback Blake Bortles are well acquainted with the two-time Pro Bowl selection. All three were Jaguars first-round draft picks and played together on a team that advanced to the 2017 AFC title game.

“He just brings some juice,” said Fowler, who was acquired last season in trade-deadline deal, “A guy that’s hungry to win.”

Ramsey has “freak ability” to cover receivers, said Bortles, who signed with the Rams as a free agent before this season. Bortles said Snead and McVay summoned him a few weeks ago to discuss Ramsey.

“I don’t know anyone who had a bad relationship with Jalen Ramsey,” Bortles said. “He’s the type of guy that if he’s on your team and going to work with you every day, he’s going to back you up every chance he gets.”

Ramsey joins a secondary that currently has only one defensive back who started the opener — safety Eric Weddle.

Peters was traded Tuesday, and on Wednesday the Rams placed safety John Johnson on injured reserve because of a right shoulder injury that will require surgery. Cornerback Aqib Talib is also on injured reserve after suffering broken ribs in the Rams’ 30-29 loss to the Seattle Seahawks.

Weddle lamented the losses but said he was “pumped” about the addition of Ramsey.

If Ramsey does not play Sunday, Darious Williams would start in his place.

Williams said he was “absolutely” ready for the opportunity to start or back up.

“That’s what you live for,” he said. “You don’t come to the NFL just to sit back. You come to play against the best, and I feel like they did a good job preparing me. So either way I’m ready for it.”

Rookie David Edwards will start at left guard against the Falcons. Second-year pro Jamil Demby had started at right guard in place of Austin Blythe, and played in place of Joe Noteboom after he was injured, but the Rams clearly do not have confidence to continue with him in that role. ... Running back Todd Gurley (thigh bruise) was limited in practice, according to the Rams’ injury report. Running back Malcolm Brown (ankle) was held out.