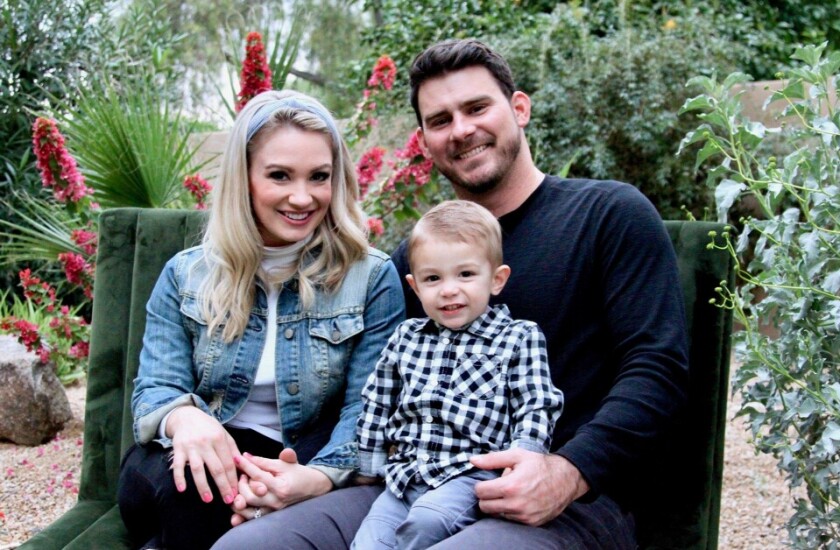 The stadiums and teammates change, but the dream remains the same. Brandon Wood is in the Angels dugout when he hears the booming voice of manager Mike Scioscia.

It is important to note that Wood is chuckling as he describes his recurring nightmare.

Yes, the game chewed him up and spit him out like a Wood chipper a decade ago, a highly touted prospect succumbing to anxiety and pressure that crippled him in the batter’s box.

But there is not a hint of bitterness or regret in his voice as he reflects on a disappointing career in which he hit .186 in 272 big-league games over five seasons while many of his prospect peers became stars.

Wood is 34 and happily married to Elly, 31. They have a 2-year-old son named Brooks — after Garth Brooks, Elly’s favorite country singer, not Brooks Robinson, the Hall of Fame third baseman. They live amid the lush rolling hills of Billings, Mont., in a house that backs up to a farm.

After dabbling in minor league coaching, toying with the idea of culinary school and selling insurance for a year, Wood believes he has found his career calling, purchasing a franchise for a D-BAT indoor baseball/softball training facility that is scheduled to open in Billings around April 1.

In addition to running the business, Wood plans to serve as an instructor, with a special emphasis on the psychological part of the game.

“I can look back and go, ‘Oh man, those struggles I had starting on opening day in 2010, the panic attack, the negativity that flowed through my brain 24/7, the sleepless nights.’ ” Wood said. “There are so many things on the mental side I learned that I feel like I can help other kids with.

“I can get into their brains when they’re 8 years old and give them some tools to handle adversity. Because this game is not about how good you are. It’s about how you handle your failures.”

Wood was a strapping 6-foot-3, 205-pound shortstop with good hands, a strong arm and a lethal bat when the Angels drafted him in the first round out of Horizon High in Scottsdale, Ariz., in 2003 and signed him for $1.3 million.

“It was something that still, to this day, I’ve never seen,” said catcher Bobby Wilson, a teammate on that 2005 Rancho Cucamonga team who recently retired after 10 big league seasons. “We talked about the flow state, of being in the zone. That entire year, it seemed like nothing fazed him.”

The sharp downturn began in 2008 when Wood, in his first extended big league stint, hit .125 with a .352 on-base-plus-slugging percentage in 29 games from late April to mid-June. The built-to-win Angels could not afford be patient with Wood. The more Wood struggled, the less he played. The less he played, the more he struggled.

“You can’t sit for five of six days with as much movement as I had in my swing and have success,” Wood said. “Then you start having mental struggles, and … it wasn’t something I felt comfortable talking about. As soon as you say you’re struggling mentally, there are red flags everywhere and sirens are going off.”

Wood appeared to rebound in 2010, winning the starting third base job in camp, but he had a meltdown on opening day, striking out three times — all on pitches well out of the strike zone — and popping out against Minnesota.

“I had a good spring, and then the game started, and the only way I can explain it is it was like if somebody had injected a full bottle of vodka into my veins and I was being knocked out,” Wood said. “It was like an out-of-body experience. I don’t think I would have made contact that day with a tennis racket.

“And it happened a lot that year. You’re in the box and there’s a disconnect between your brain, your vision and your body. The nerves have put you in a fright instead of fight mode and your mechanics change. Your mentality changes. You can’t see the ball.”

The low point may have come the day renowned sports psychologist Ken Ravizza pulled Wood aside before a game.

“He said, ‘I want you to close your eyes and we’re going to simulate success,’ and before I could envision success, I’d see a strikeout,” Wood said. “My brain couldn’t even pause for a second to envision success.”

The Angels released Wood in April 2011. He signed with Pittsburgh and hit .220 with a .625 OPS in 99 games but was released after the season.

He played minor league ball in the Colorado, Kansas City and Baltimore systems in 2012-2013 and went to camp with San Diego in 2014. A prescription for Lexapro, which treats depression and anxiety, helped, but not enough. Wood was released that March.

The last shot for Wood was the Sugar Land (Texas) Skeeters of the independent Atlantic League. His stay was brief.

“It was 30 minutes before the season opener, and I had the exact same feeling I had in 2010,” Wood said. “It’s back, and I’m laughing because my body and brain were not connected, and I knew it was going to be a mess.”

Wood was out of the game at 30, a decade after being rated baseball’s third-best prospect, the same Baseball America ranking that outfielder Jo Adell, considered the Angels’ best prospect since Mike Trout, will take into camp this spring.

Asked what advice he would give Adell, Wood said it would be to not over-think the game.

“I would tell him to just stay in the middle, don’t get too high or too low,” he said. “Enjoy every moment of it, and when you get there, if you struggle at any point, realize that you’re the No. 3 prospect for a reason. You can do things other people can’t. Relax, sit back and think about what got you there.”

After his playing career, Wood spent two seasons coaching low-level minor league teams for the Padres. He quit when he realized he didn’t have the passion for the 12-hour days that came with the job.

He met Elly, a Billings native, in Arizona. The couple moved to Montana in 2017. Wood worked for an insurance company for a year before purchasing the D-BAT franchise.

Wood made $1.235 million playing baseball, not including his signing bonus. The dreams he had as a young man — to have a long and lucrative big league career, to make the Hall of Fame, to buy his parents a house — were shattered.

A broken man, Wood is not.

“If I could go back and put my arm around myself at age 25, I’d say, ‘Hey, this might suck, but life is going to be good, just stick with it,’ ” Wood said. “Now, in watching how my life has turned out — seeing how I can sell insurance for State Farm in Billings, Montana, and be the happiest I’ve ever been — it kind of proves that you go through certain things in life to get you to the next.

“I feel like I’m much better in this next chapter than I would have been if I didn’t go through those struggles.”