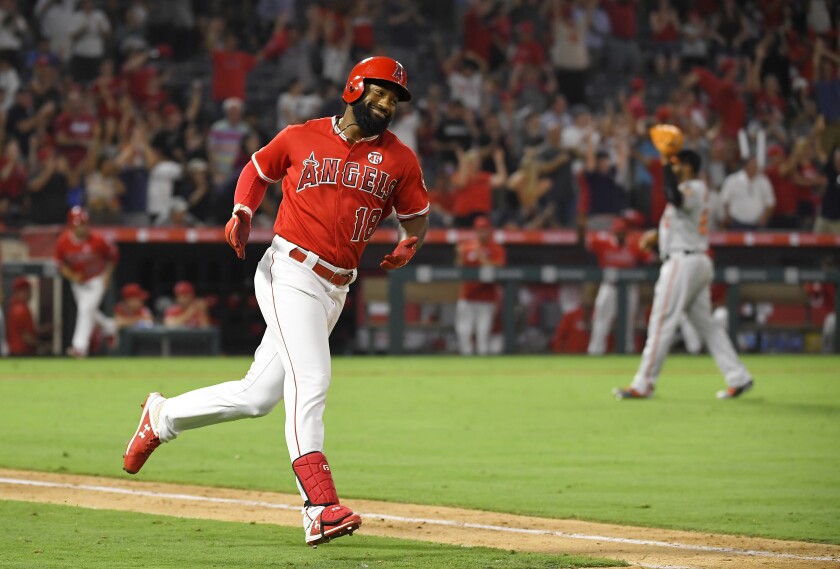 All arbitration-eligible Angels except outfielder Brian Goodwin agree to contracts

The Angels might be headed to a hearing to decide the one-year value of the contract of outfielder Brian Goodwin. Eligible for a raise through arbitration for the first time, Goodwin was offered a salary of $1.85 million Friday. The figure was $350,000 less than Goodwin’s submission of $2.2 million.

With such a narrow gap to cross, the Angels and Goodwin could come to an accord before their hearing date in February. That would keep the team’s streak of avoiding arbitration hearings at nine years.

The Angels and the rest of their nine arbitration-eligible players agreed to one-year contracts on the day numbers were required to be exchanged, said people familiar with the negotiations who were unauthorized to comment publicly.

First time All-Star Tommy La Stella was the only Angels position player eligible for arbitration who agreed to a contract that more than doubled his 2019 salary. La Stella, who hit .300 with 16 homers and 44 RBIs in 78 games before a tibia fracture torpedoed his breakout season, will make $3.25 million in his final year of arbitration, an increase of $1.9 million over his 2019 salary.

Reliever Cam Bedrosian, who is recovering from a forearm strain, will make $2.8 million, an increase of $1.05 million after becoming the Angels’ go-to weapon against left-handed hitters. Bedrosian held that group to a .172 average. He had a a 3.23 ERA in 59 games and logged 64 strikeouts in 61 1/3 innings.

Closer Hansel Robles, who emerged as one of the best relievers in the American League, agreed to a deal worth $3.85 million, a raise of $2.45 million from last season. Fellow reliever Keynan Middleton will make $800,000 in his first full season back from Tommy John surgery and bullpen mate Noe Ramirez will get $900,000. Catcher Max Stassi, arbitration-eligible for the first time like Middleton and Ramirez, agreed to an $800,000 contract.

One year after nearly tripling his salary, starting pitcher Andrew Heaney’s earnings stalled. He received a contract of $4.3 million, only $900,000 higher than his 2019 deal. Injuries affected the left-hander again and limited him to 18 starts.

To bolster the rotation, the Angels traded for durable right-hander Dylan Bundy last month, despite his being due a raise in his second year of arbitration. They agreed to pay him $5 million in 2020, a raise of $2.2 million.

The Angels haven’t gone into an MLB mediator’s room to discuss salaries, a process that can turn ugly, since former ace Jered Weaver and agent Scott Boras forced the issue in 2011. The Angels won the decision and saved $1.435 million, but their relationship with Weaver did not sour. Six months later, Weaver signed a five-year, $85-million extension that carried him through 2016.