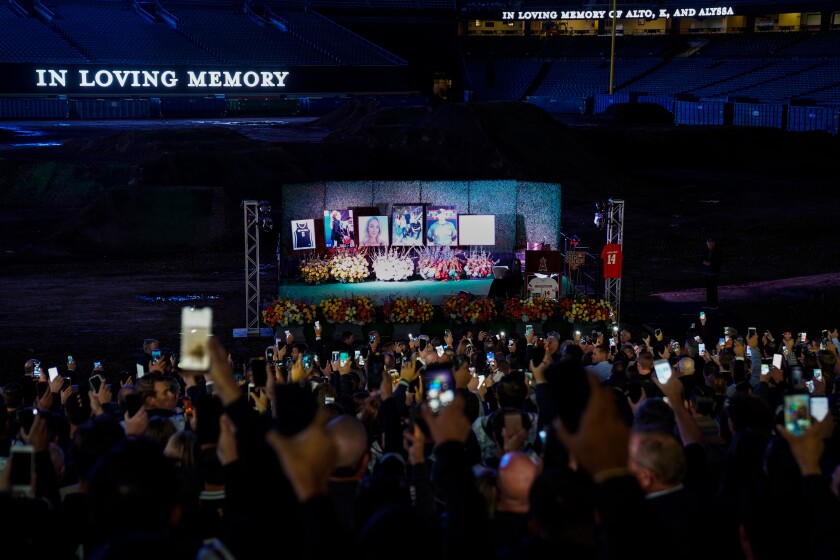 Altobellis remembered during service attended by thousands at Angel Stadium

It’s still almost impossible to fathom more than two weeks later, three members of a Newport Beach family — a father, mother and their 14-year-old daughter — gone in an instant when the helicopter carrying them to a basketball tournament crashed into a Calabasas hillside on that foggy Jan. 26 morning.

A grieving community trying to come to grips with the tragic crash that killed longtime Orange Coast College baseball coach John Altobelli, 56, his wife, Keri, 46, and their daughter, Alyssa, wrapped its arms around the two surviving members of the family during a celebration of life in Angel Stadium on Monday.

As an emotional two-hour service filled with tears, laughter and music ended in the early evening darkness, family friend and pastor Erik Rees asked the crowd of about 4,000 to shine the lights of their phones toward JJ Altobelli, 29, John’s son and Keri’s stepson, and Alexis Altobelli, 16, Alyssa’s older sister.

“JJ, Lexi, I know the time you had together with all of them doesn’t seem like it’s enough, but I know you’ll cherish it,” said Buck Taylor, the former San Marcos Palomar College coach and current Kansas State pitching coach who was a longtime friend of John Altobelli. “You two are strong enough to work through this.

“I mean, look around. You have the support of so many great family members, friends and people here. I want you to understand that you’re always a part of our family.”

Taylor was one of 15 speakers to remember the Altobellis, a group that included University of Texas coach Bill Pierce, a college teammate of John at Houston, several former OCC assistants, longtime friends of Keri as well as her brother, and friends and teammates of Alyssa.

A dozen large collages filled with family photos lined the main concourse of the stadium. The stage was decorated with a dozen large floral bouquets, several family photos and three framed jerseys, the ones John Altobelli wore as a player at Houston and the No. 14 he wore at OCC, and Alyssa’s No. 5 basketball top.

Alyssa Altobelli was a feisty, sharp-shooting, creative-passing point guard on the Newport Beach-based Mambas, an elite eighth-grade travel team coached by former Lakers star Kobe Bryant, who was killed along with his 13-year-old daughter, Gianna, and four others in the crash.

“No matter how many times she got knocked down, she always got up stronger and fought harder,” Mambas teammate Allison Eadie said of Alyssa. “She was not only a great player but an amazing teammate. We planned on going to Oregon together and being a force to be reckoned with. This was our dream, and I will live it for the both of us.”

Sammy Forbath, one of Alyssa’s best friends and neighbors, admired Alyssa for her sense of humor, her dedication to basketball and for having “the hardest work ethic I’ve ever seen,” but she also saw a softer side.

“She was an avid animal lover,” Forbath said. “In the sixth grade, she thought the turtles in science class were being mistreated so she took them home from the classroom as pets. She had the biggest heart.”

Keri Altobelli, known as “K” to her family members and friends, was remembered as a fiercely loyal wife, mother, sister and friend. She attended virtually every OCC baseball game, home and away.

“She immediately embraced JJ as her son and loved him like he was her own,” said Lori Lever, who called Keri a best friend and mentor of 30 years. “She was strong, direct, real, unapologetically bold, hard-working and brutally honest because she cared. She stood up for herself, her family and her close inner circle.”

“The impact he made on so many young men’s lives will truly never be measured,” said Josh Belovsky, a former OCC assistant. “We can tally his 700-plus wins, his four state championships …

“But we have no clue how many teachers, police officers, firefighters, dads and husbands that he helped develop along the way. Those are the wins he cherished most. And to see his players come back and thank him for making an impact on their lives is what mattered to him.”

The crowd included hundreds of former and current OCC baseball players, players from Golden West and Fullerton College, several of John Altobelli’s college teammates and a large contingent of umpires, a group Altobelli often did battle with “because it was just in his DNA to fight for his players,” Pierce said.

JJ Altobelli, a scout for the Boston Red Sox, spoke briefly during the service, taking the lectern with his sister, Alexis, a high school junior, and his fiance, Carly Konigsfeld, at his side. The two plan to marry this summer.

“On behalf of me, Lexi, Carly, I can’t thank everyone here enough,” he said. “The amount of love and support we’ve received these past few weeks has been truly amazing. Each text, call, donation or act of kindness has not gone unnoticed. It really shows the impact my Dad, K and Alyssa had on everyone here.”