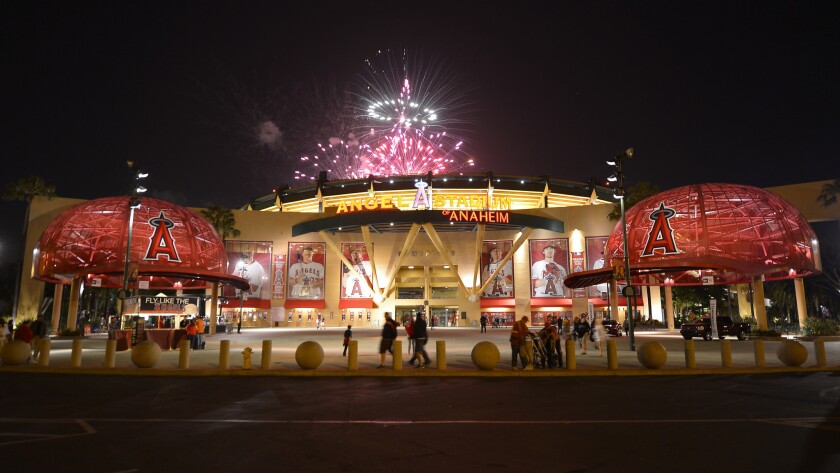 An $8 million question: Why didn’t Anaheim collect its opt-out fee from Angels?

On deadline day, the Angels announced they had opted out. In a letter, Angels chairman Dennis Kuhl notified the city of Anaheim that the team had elected to “exercise its option to terminate the Lease.”

“As a condition of such termination,” the lease reads, “Tenant shall pay or cause to be paid to Landlord a termination fee.”

The amount was $8 million. Yet the city did not collect that $8 million, or even try to do so, or even mention it when the city council voted to reinstate the Angels’ lease three months later.

The city and the team have renewed discussions on a new lease, and the Angels face a Dec. 31 deadline to exercise another chance to opt out.

Tom Tait, the mayor of Anaheim last October, said last week he believed the fee had been due immediately. He cited Robert Fabela, the city attorney, telling the city council at its next meeting that the Angels had terminated the lease.

Mike Lyster, the city spokesman, said in a statement Monday that the Angels were not billed because the fee would not have been due until they actually moved out.

“By its very name, a termination fee applies to the termination of a lease,” Lyster said. “It’s not an opt-out fee, and the lease is clear on that.”

However, two law professors who reviewed the lease for The Times said the language in question was ambiguous, and subject to interpretation.

“What is the act that causes the termination? Is it the actual moving out? Or is it providing the notice?” UCLA law professor Russell Korobkin said. “To me, it could be argued either way.”

On Jan. 15, one month after Harry Sidhu replaced Tait as mayor, the city council voted to reinstate the Angels’ stadium lease. The council agreed to nullify the Angels’ opt-out decision last October, provide the team with the new opt-out deadline, and allow the team the option to play out the current lease through 2029.

Tom Morton, who heads the city’s convention, sports and entertainment department, acknowledged under questioning from Councilman Jose Moreno that the staff report prepared for the council in advance of the reinstatement vote did not mention the $8 million.

“We did not speak to any economic implications of reinstatement,” Morton said at the Aug. 27 council meeting.

Moreno said he “absolutely” would have wanted to know that the city could have been forfeiting $8 million in the process.

“If we had not extended the lease,” Moreno said, “we would have received $8 million.”

In a statement, Sidhu called the issue of the termination fee a “distraction” and said the priority is to strike a deal with the Angels that keeps baseball in town for decades to come.

“We are looking at the future of baseball in Anaheim for the benefit of our residents and neighborhoods,” Sidhu said. “To focus on a one-time termination fee over what baseball brings to our city each year is shortsighted.”

The city would expect to make far more than $8 million in a new deal with the Angels. If the team opts out in December and actually leaves after the 2020 season, the termination fee would be $7 million, and the city might well make up the balance in stadium revenue next season.

However, if the Angels neither reach a new deal with the city nor opt out of their current one, they can stay under the terms of the current lease, and the city would have foregone the chance to collect $8 million, or to leverage that obligation in any other way.

In Anaheim, even with its $2-billion budget, an extra $8 million could be significant.

The city’s current annual budget allots $11.5 million to libraries and $10.8 million to parks. In his district, Moreno said, the city has deferred maintenance on streets that have not been repaved in half a century, a project he has been told would cost $4 million.

However, according to that staff report, revenues derived from the Angel Stadium lease are not allotted to the city’s general fund. Instead, stadium revenues go into the budget of Anaheim’s convention, sports and entertainment department.

On that score, an extra $8 million would have allowed the city to say it had recouped the $20 million it contributed toward the $117-million stadium renovation in 1996-97. (The Walt Disney Co., then owner of the Angels, paid the other $97 million.)

Since then, the city has received $26 million as its share of revenue from Angels ticket sales, other events and parking at Angel Stadium, according to city records. However, after subtracting its required payments for stadium repairs and improvements, the city’s net return has been $13 million.

Michael Chasalow, director of the small business clinic at the USC law school, said it would be “reasonable” for the city to interpret the termination fee as payable upon the Angels moving out of the stadium, rather than upon serving the city with notice of termination. Still, he said, the lease language ought to be clearer.

“If one of my students wrote this,” Chasalow said, “I would say, ‘When? When are they going to be paid?’ There is no provision about when the payment needs to be made. It just says ‘as a condition of termination.’ ”

The ambiguity only became relevant when the Angels terminated their lease without actually leaving, an event the city might argue it should not have been expected to anticipate. But the ambiguity underlines the importance of making the lease as specific as possible, a lesson the city already learned the hard way with regard to the Angels.

In 2005, when the team changed its name to the Los Angeles Angels of Anaheim, the city sued, arguing in part that it should not have thought to forbid the team from using two city names because no major league team had ever done so. The city lost when a jury ruled the name did not violate the lease provision requiring the team name to “include the name Anaheim therein.”

As a result, the city’s agreements with the NHL Ducks now require the team name to be “Anaheim Ducks.”