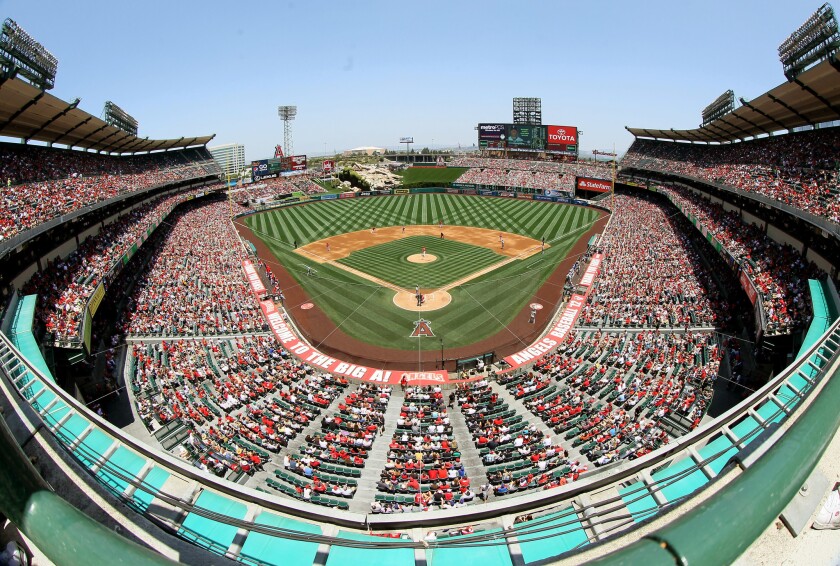 From fields where alfalfa, corn and oranges had grown, a stadium blossomed. Anaheim Stadium opened in 1966, welcoming the Angels with a scoreboard that rose 230 feet and announced the city’s arrival as a major league home.

Over the decades, the team has changed its geographic label from California to Anaheim to Los Angeles, but it never has abandoned Angel Stadium. On Friday, the Anaheim City Council approved an agreement that could extend the Angels’ tenure in town toward the end of the century.

By a 4-2 vote, the council agreed to sell the city-owned stadium and the surrounding parking lots to a company controlled by Angels owner Arte Moreno. Council members Denise Barnes and Jose Moreno voted no, after the council majority rejected their proposal to postpone the vote.

The sale is the first in a series of agreements intended to transform an aging stadium and acres of parking lots into a vibrant entertainment district that would make the area come alive before and after the Angels play, and on days they do not play at all.

None of this transformation would happen soon, with the deal expected to close by 2025 and development expected to extend to 2050. Moreno’s company has six months to deliver a development plan to the city, including a decision on whether to build a new stadium or rebuild the existing one.

Angel Stadium is the fourth-oldest ballpark in the major leagues, behind Boston’s Fenway Park (1912), Chicago’s Wrigley Field (1914) and Dodger Stadium (1962). The sale agreement calls on the Angels to commit to play in Anaheim through 2050, with five options that would extend that tenure for five years apiece.

The city and the Angels said the parties did not start formal negotiations until last month, but Angels president John Carpino pushed back against the suggestion that the vote be postponed because the deal has been rushed. Carpino said the city and the team have discussed various deals over the past nine years, all with the objective of keeping the Angels in town for the long term.

“This decision … has not been rushed,” Carpino said.

Barnes called the decision to vote on Friday “manufactured pressure.” She said the council should not approve a deal without a value on whatever community benefits the city might propose to subsidize, and an understanding of who Arte Moreno’s partners might be and whether they have any expertise in development.

The sale price was announced at $325 million. For half a century, the city generated relatively little revenue from stadium operations and no tax revenue from more than 100 acres of parking spaces. Now, Moreno’s company would pay for a state-of-the-art ballpark and development on the parking lots, at no cost to the city.

However, the city anticipates a reduction in the sale price should the Angels agree to a subsequent development agreement that provides for affordable housing, parks and open space, and local hiring. The sale agreement does not restrict Moreno’s company from pursuing other subsidies at a later date.

In addition, the city does not receive any money immediately. The city would receive its first payment of $20 million next year, assuming the city approves the development agreement. The balance of the sale price is payable in installments until closing, and the deal does not become permanent until closing.

The Angels commissioned a feasibility study that envisioned dotting the parking lots with homes, offices, restaurants, shops, a hotel, a beer garden and wine bar, a fitness center and social spaces. That study estimated the city could reap $20 million per year in tax revenue from that development, but Moreno’s company has not committed to that vision.

The entire 153-acre site is worth up to $500 million, according to one of a series of appraisals received by the city, but that value could be realized only if Anaheim wished to kick out the Angels and clear the site for development.

“Today is the moment of truth,” Anaheim Mayor Harry Sidhu said. “We cannot see a value of $500 million and have baseball.”

When the city last January voided the Angels’ decision to opt out of their current lease and reinstated the lease in full, the team regained the ability to control the land up to 2038. If the Angels were not doing the development, as Carpino reminded the council, they could have restricted development on the site for the next two decades.

On Dec. 3, the same day the council was told the deal was done, the city received a final appraisal, based on the terms of the deal, that valued the site at $300 million to $320 million.

Paul Kott, an Anaheim realtor, said that appraisal had been “manipulated” by the deal process and noted the appraiser had said fair market value is best determined by competitive bidding. Instead, he said, the city is claiming the Angels are paying market rate based on an appraisal that considered one bidder and one purpose.

Several speakers expressed agitation that the city did not insist the team return to the Anaheim Angels name.

“If you don’t do that, you’re not representing the people of Anaheim,” Wes Jones said.

City manager Chris Zapata said city negotiators twice asked the Angels to change their name back to Anaheim. The team declined both times, he said.

“The answer is no,” Carpino said.

Said councilman Trevor O’Neil: “If I owned the team, I would call them the Anaheim Angels. But I don’t own the team.”

Barnes, however, said the issue was “make-or-break” for her.

“If I’m going to have a team here, on our property, with fans that are going to bleed red, then for God’s sake give us Anaheim,” she said.

The meeting attracted about 225 people, according to the city, with many among the 79 speakers lauding the Angels for their commitment to the community and for the promise of construction jobs that would come with the development jobs.

Angels chairman Dennis Kuhl said the team’s foundation has donated more than $16 million and more than 1.5 million tickets to local nonprofit organizations since 2004, the first full year of Moreno’s ownership.

“The Angels,” Kuhl said, “are here to help Anaheim.”

Four hours of public comments preceded the council discussion and vote. The most entertaining of the comments came from Vern Nelson, dressed in a Santa hat, who sang rather than spoke. To the tune of “Take Me Out to the Ballgame,” he sang: “Bilk Me Out of Our Ballpark.”