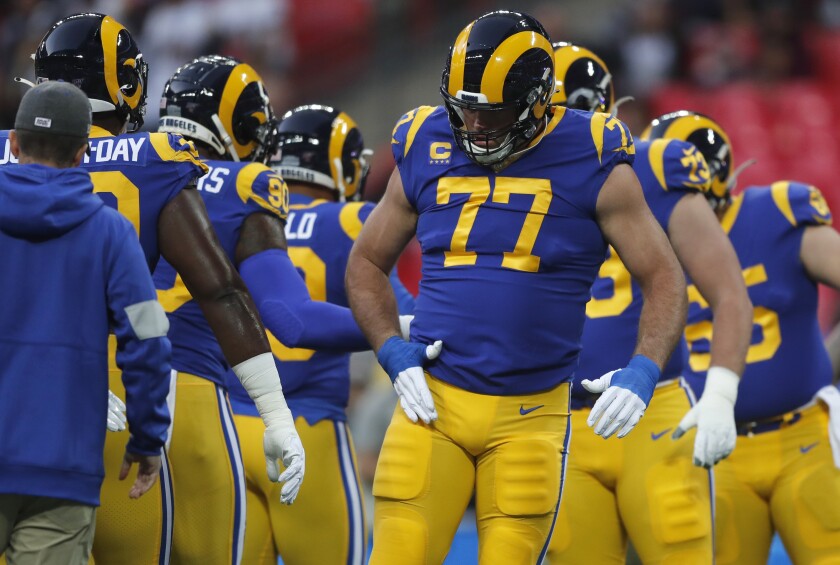 Andrew Whitworth is a left tackle with nobody left.

He now has a piece of NFL history as the 12th starter in the modern era with victories over all 32 teams.

Whitworth checked his last box with Sunday’s 24-10 win over Cincinnati, the place where he spent the bulk of his career. So it all ended where he started.

“It’s unbelievable,” the 37-year-old tackle said of the synchronicity of it all. “It’s one of those things you’re really proud of, and realize the longevity and success you’ve had in your career.”

The 14-year veteran the mark of astounding durability in a position that’s especially brutal on the body.

Acquiring Whitworth to button down the left side of the offensive line and protect the blind side of Jared Goff was one of the first moves the Rams made after hiring coach Sean McVay in 2017. Although Todd Gurley was the team’s most valuable player that season, Whitworth was at least in that conversation.

“In my opinion, Whit’s a first-ballot Hall of Famer just because of how long he’s been doing it and the level he’s been doing it at,” Rams right guard Austin Blythe said. “He brought stability to a position that the Rams were struggling at in previous years, and also brought that veteran leadership that he had in Cincinnati.”

A two-time All-Pro, Whitworth was a team captain in eight of his 11 years with the Bengals. He has been a captain all three of his seasons with the Rams.

“He’s been one of the most important people in our locker room since he got here,” Goff said. “Just the way he conducts himself daily, you’re able to feed off that. I think anytime you see a guy in the NFL as long as he is, going as hard as he does in practice, you look around and go, ‘Man, if he’s doing that, I’d better be doing that.’ He sets the standard and the tempo for us.”

And, in a way, Sunday felt like practice for Whitworth.

“A little bit in the beginning of the game, it was kind of surreal,” he said of playing against his old team. “And as the game kept going, it kind of felt like I was in training camp playing against the guys that I’ve played against forever. It was good to see everybody.”

A father of four, Whitworth brought his wife, Melissa, and their kids on this trip. They all stayed at the team hotel over the weekend, and at least one of his elementary school-aged sons was in the locker room after the game.

“When this game came out, we knew it was going to be special,” Whitworth said. “The day we signed with the Rams, we never went back. So for them, they hadn’t been back to Cincinnati. We look forward to that when I retire, but as of now we haven’t gone back. So it was good for them. They were so excited when this game was on the schedule. Wherever it was, they wanted to be there.”

Whitworth played on multiple Cincinnati teams that reached the postseason, but he didn’t win in the playoffs for the first time until the Rams beat Dallas last January. They then went to Louisiana, his home state, and beat the New Orleans Saints in the NFC championship game. That’s among his favorite memories, he said, but there are a lot he cherishes.

“Winning the NFC championship and getting to the Super Bowl were great,” he said. “But really I think about all the wars in the AFC North against Baltimore and Pittsburgh and Cleveland, and then coming over here and how good the NFC West has gotten. Going to Seattle and beating them the way we have, and San Fran now being a better football team. The camaraderie of those division games and what it means, it’s always so much fun.”

Now, having been a part of wins over all 32 teams, he has more reasons to look back fondly on this trip to the United Kingdom.

“This is my third time, and I enjoyed every moment of it,” he said of playing in London. “The fans are great. The trip’s tough on you, but once you catch up on sleep, it’s great. Especially at my point, 14 years in, every experience I’ve gotten to have in the NFL reminds you of how special this game is.”