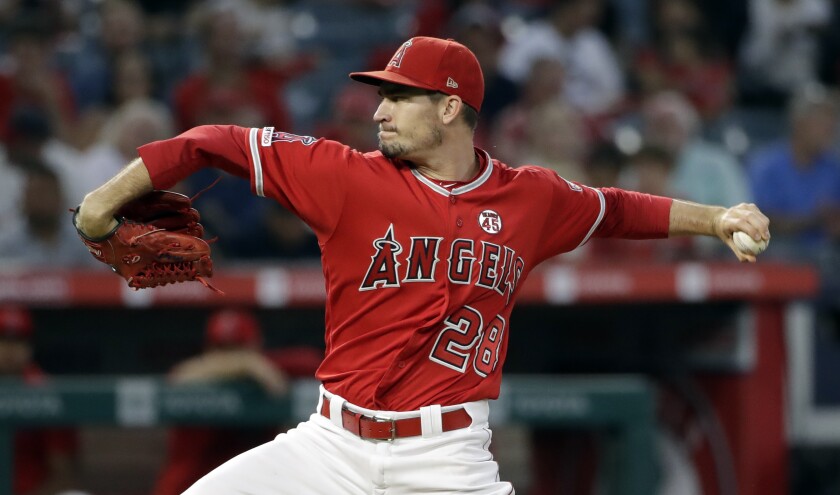 The lack of remorse displayed by high-profile members of the Houston Astros found to illegally steal signs during the 2017 and 2018 seasons so bothered Angels starter Andrew Heaney that he profanely excoriated them when addressing the situation Wednesday.

“I know how it is,” Heaney said. “You get caught up in something. I’m sure they look back now and say ‘Oh [man], we really took that overboard.’

Seven former Astros, including Mike Fiers, the pitcher whose testimony to the Athletic sparked a three-month investigation by MLB , have admitted to wrongdoing. Catcher Max Stassi became one of them on the Angels’ first day of workouts for pitchers and catchers. He was called up by the Astros in August 2017 and played with them until he was dealt to the Angels at last season’s July trade deadline. He expressed regret for not trying to halt the operation.

“When you’re a lower man on the totem pole, you just show up and you go out there and play,” Stassi said. “I apologize to all those around the game, the people who were affected by it, the fans, coaches. Especially the kids who look up to us. We’re supposed to set an example and do the right thing. We didn’t do that.”

Throughout the 2017 season and for part of 2018, Astros video room staffers used an outfield camera to steal signs from the catcher and relay them to batters in real time by whistling, clapping, yelling and eventually banging on a trash can at the base of the dugout steps. The largely player-driven enterprise, which Stassi was surprised to learn about upon being promoted, became an open secret. The Angels took measures to protect their signs when facing their division rival.

“We had to change signs a lot,” pitcher Félix Peña said in Spanish. “There were a lot of things we didn’t do because we always thought they were too keyed in on the small things we did.”

Heaney had Tommy John surgery in 2016 and did not face the Astros at the height of the fiasco in 2017. Yet suspicions of the operation did not escape his notice. He was careful to mix up signs and shield his glove when he made five starts against them the following season, including two in Houston. He was particularly conscientious of his glove placement when Astros baserunners reached second base.

Heaney gave up six runs and a .286 batting average over 10 innings at Minute Maid Park in 2018. Facing the Astros at Angel Stadium, he held them to seven runs and a .216 average over 20 innings. The bulk of the damage done against him in Anaheim came Aug. 24, when he gave up five runs and eight hits.

“I am not going to sit here and say I feel victimized,” he said. “I’m not going to make that excuse. I think it’s part of your job to cover that up, and be on top of it. But it’s not your responsibility to make sure teams aren’t stealing your [signs] illegally. I have a lot of feelings about it. It’s hard to sum all that up. I can only focus on what’s happening on the mound. Beyond that, hopefully the other [stuff] will take care of itself.”

No current Astros players have apologized for taking part in the scheme despite being asked about it at the team’s fan festivities last month. All-Stars Alex Bregman and José Altuve danced around the subject, using Commissioner Rob Manfred’s report as a shield. The Astros won’t address reporters, who were denied access to the team’s spring-training facilities Wednesday, until Thursday at the earliest. Heaney and reliever Taylor Cole are among those in the Angels clubhouse hoping to see some contrition.

Cole, a former teammate of Mike Bolsinger, the pitcher who filed a lawsuit against the Astros for allegedly derailing his career, said, “I just think everybody wants accountability.”

Heaney proposed the league crack down on in-game technology usage by limiting access to the clubhouse. Manager Joe Maddon agreed.

“The less technology the better,” Maddon said. “You’ll see more passion back in the game.”

Two-way player Shohei Ohtani said through an interpreter that he had hoped to get a chance to start as a pitcher on opening day. But the Angels told him “a while ago” that he wouldn’t return to the mound in a major league game until mid-May because they wanted to make sure he is available to pitch late into the season for a potential playoff push. The Angels had always planned to limit his innings this season because he hasn’t pitched since before undergoing Tommy John surgery in October 2018. … Stassi is ahead of schedule since having offseason hip surgery. He said he feels more mobile behind the plate. His spring workload might be limited but believes he can be ready for opening day.