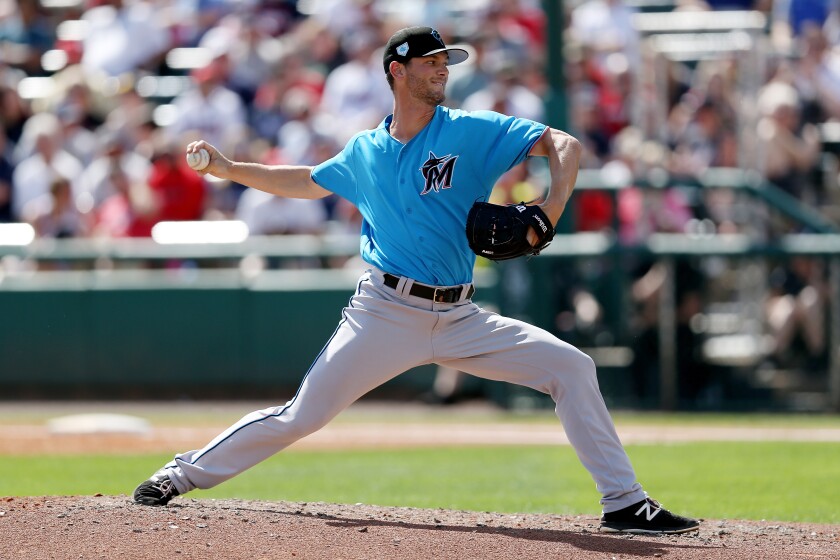 Keller, 26, was designated for assignment by the Marlins on Dec. 20 and is likely a roster-depth option for the Angels. He debuted for the Marlins in 2019, striking out 11 and walking eight while allowing four earned runs in 10⅔ innings. He earned a big-league look after an encouraging 2018 season during which he posted a 3.08 earned-run average and struck out 78 over 52 2/3 innings at three minor league levels. Last season, he had 11 saves and a 4.26 ERA in 57 minor league innings.

Drafted out of Southeastern Louisiana University in 2011, Keller has pitched almost exclusively out the bullpen. He has 29 saves in 163 minor league appearances.

The Angels designated for assignment right-hander Jake Jewell in a corresponding move. Jewell, a fifth-round pick in the 2014 draft, posted a 6.84 ERA in 26 1/3 major league innings in 2019.

Angels general manager Billy Eppler’s energy this offseason has been spent on enhancing a pitching staff that posted a combined 5.64 ERA, the second-worst mark in the major leagues. He has not added a star pitcher, but brought in reliable starters in Dylan Bundy and Julio Teheran last month. He has stockpiled relief arms such as Parker Markel and Mike Mayers, who have had success at triple-A but have struggled to find a foothold in the majors.

The Angels also hope to get a contribution from 23-year-old left-hander Luiz Gohara, a former top Atlanta Braves prospect who hasn’t pitched since 2018 because of injuries. Gohara had a 2.62 ERA with 147 strikeouts and 44 walks over 26 games (25 starts) in 2017, his most recent full season in the minors. He signed a minor league deal with the Angels late last season.

After missing out on front-line starters in free agency, Eppler could continue to shore up the Angels’ relief corps during the final month of the offseason.