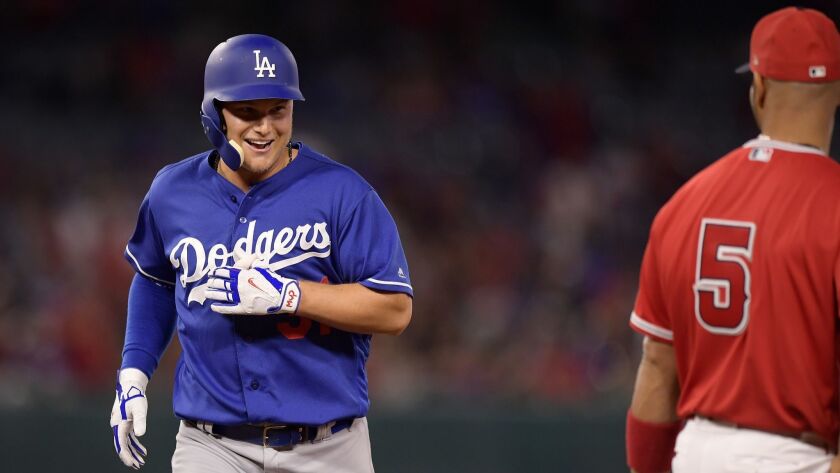 The Angels were supposed to spend their offseason patching a starting rotation that has for years struggled to perform with any semblance of consistency. Instead, they saved those resources to woo World Series champion Anthony Rendon and sign him to a seven-year, $245-million contract in December.

And it became apparent one week before their pitchers and catchers report to spring training in Tempe, Ariz., that they had also saved a portion of their funds to further fortify an already formidable lineup. The Angels reportedly acquired outfielder Joc Pederson from the Dodgers in exchange for middle infielder Luis Rengifo on Tuesday night.

The move, which is expected to include additional players from each team once approved, strengthens an offense that already features three-time MVP Mike Trout, sluggers Shohei Ohtani, Justin Upton and Rendon, and an aging but still intimidating Albert Pujols. It also provides a security blanket for top prospect Jo Adell, who has played 27 games at triple-A but could reach the major leagues this season.

Pederson, 27, has significantly more power than fellow left-handed hitter Brian Goodwin, who was poised to hold Adell’s place. Pederson hit 36 homers while batting .249 last year and has connected for no fewer than 25 in all four seasons he has played at least 137 games. In effect, Pederson would replace the power production of right fielder Kole Calhoun, who hit 33 home runs while batting .232 last season before leaving via free agency and signing with the Arizona Diamondbacks.

But Pederson is not without flaws. He hits left-handed pitchers so poorly that he only made 50 plate appearances against them last season. He hit all 36 of his 2019 homers against right-handers. He has only nine home runs against left-handers since debuting in 2014.

Goodwin, 29, is a bit more balanced. In a breakout season with the Angels, he hit .263 against left-handers and .261 against right-handers. He could provide some consistency off the bench as the Angels’ fourth outfielder.

Like Goodwin and the Angels, Pederson and the Dodgers have a pending arbitration case. In his final year of eligibility, he requested $9.5 million. The Dodgers countered with $7.75 million. In trading Pederson on the same night they arranged a blockbuster trade with the Boston Red Sox, the Dodgers cleared room in their competitive balance tax payroll to accommodate the addition of outfielder Mookie Betts and starting pitcher David Price.