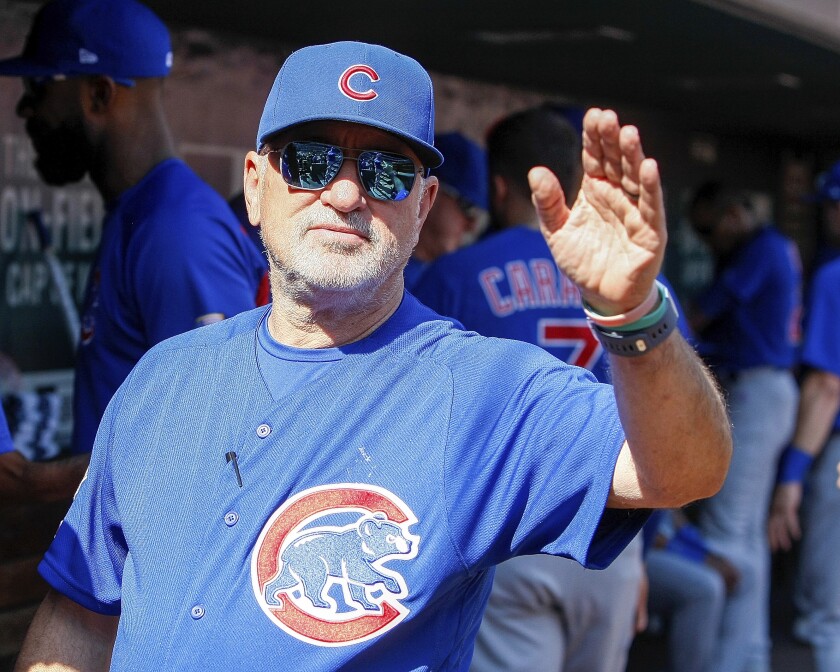 Angels hire Joe Maddon as manager, returning him to Anaheim

The Angels have been to the playoffs one time in the last decade, an anti-climactic three-game stint in 2014 that saw star Mike Trout held to one hit. Despite Trout’s unrelenting dominance in the time that has passed since that demoralizing series sweep, the Angels have experienced four losing seasons in the last five years.

They hope to change that now. World Series-winning manager Joe Maddon, an employee of the Angels from 1975-2005, was hired Wednesday to usher in the next era of October baseball in Anaheim. Maddon’s contract is for three years and $12 million. Buck Showalter, John Farrell and San Diego Padres hitting coach Johnny Washington also were interviewed for the position.

“We are thrilled that Joe is coming back home and bringing an exciting brand of baseball to our fans,” Angels general manager Billy Eppler said. “Every stop he has made throughout his managerial career he has built a culture that is focused on winning while also allowing his players to thrive. We believe Joe will be a great asset for our club and look forward to him leading the team to another World Series championship.”

Maddon’s deal gives him more job security than Eppler, who is under contract only for the 2020 season after the Angels picked up his option in August. Eppler spent the first three years of his tenure with Scioscia at the helm before hiring Brad Ausmus last October to a three-year contract. That experiment was short-lived. Ausmus, 50, was fired the day after the Angels completed their first 90-loss season this century.

In comes Maddon, 65, a man as highly regarded for his embrace of modern baseball as for his quirky and effective leadership styles. Only three times have Maddon-led teams finished with a losing record.

After the Rays lost 101 and 96 games in his first two seasons, Maddon in 2008 led them to 97 wins and the World Series, where they fell to the Philadelphia Phillies in five games. The Rays posted winning records the next five seasons and won the AL East in 2010. Maddon opted out of his contract after the Rays went 77-84 in 2014 and signed a five-year, $25-million deal with the Cubs.

Maddon transformed a team that had finished fifth in the National League Central for five consecutive years into a perennial postseason contender. With a nucleus featuring future most valuable player candidates Anthony Rizzo and Javier Baez and the 2016 MVP Kris Bryant, the Cubs won the World Series for the first time since 1908 in a seven-game triumph over the Cleveland Indians two years and one day after Maddon was hired.

The Cubs failed in their defense of the NL pennant the following season, losing to the Dodgers in the NL Championship Series in five games. The Cubs did not advance beyond the wild-card game in 2018 and this year they finished 84-78, seven games out of the division lead, after being in first place as late as Aug. 22.

Cubs general manager Theo Epstein suggested that the 2019 Cubs lacked motivation and that it was not up to the front office to hold players accountable on a daily basis, seemingly implying Maddon did not push his players as he did during the first four years of his five-year contract.

Still, Maddon and Epstein parted ways amicably, toasting their joint success over wine in their St. Louis hotel during the final weekend of the 2019 season.

Now Maddon, whose .540 winning percentage (1,252-1,067) ranks 20th among those who have managed at least 2,000 games, will return to Anaheim with the same expectations placed upon him when he first arrived with two franchises in need of face-lifts. The Angels will expect Maddon to win.

Of course, Maddon will not have it so simple. He enters an organization in upheaval. The Angels are facing serious allegations regarding the death of pitcher Tyler Skaggs, who was found to have the opioids oxycodone and fentanyl in his system at the time of his July 1 passing in a Texas hotel room during an Angels’ road trip.

Communications director Eric Kay, who has been on paid leave since mid-July, told the U.S. Drug Enforcement Agency that he procured opioids and abused them with Skaggs for years. The admission widened the investigation into Skaggs’ death and prompted federal agents to begin questioning current and former Angels players about the prevalence of opioids in the clubhouse. Current Angels pitchers Andrew Heaney, Trevor Cahill and Noe Ramirez, and former Angels pitcher Matt Harvey are among at least six players already interviewed by the DEA.

The Angels are confident Maddon, who will be introduced as manager next week, can deftly navigate those murky waters.