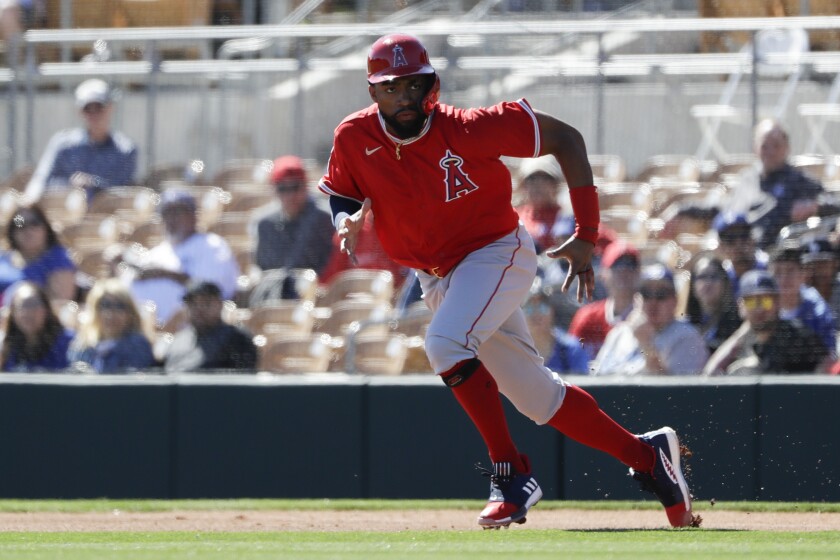 The Angels announced Sunday that top prospects Jo Adell, Brandon Marsh and Jordyn Adams will be included in the pool of players joining them in Southern California when the team reconvenes for a modified training camp next week.

Not on the list? First-round draft pick Reid Detmers, who signed for a reported bonus of $4.67 million shortly before the roster announcement.

Detmers, a left-handed pitcher selected 10th overall out of Louisville earlier this month, could be added to the pool of players at a later date. The Angels left five openings on the 60-spot list.

Among the other players listed in the Angels’ player pool are three-time MVP Mike Trout, whose wife is expecting the couple’s first child in August, and top offseason acquisition Anthony Rendon. Also included were minor leaguers Chris Rodriguez, who is injury-free for the first time since 2018, and Anaheim native Jose Rojas.

Angels prospect Chris Rodriguez is healthy after losing the entire 2018 season and most of 2019 to back injuries, but he’ll have somewhere to pitch in 2020.

Despite not owning a spot on the 40-man roster, Adell and others in his situation can appear in major league games this season — as long as they are eventually placed on the list of active players. The Angels would have to clear room on the 40-man roster to do so.

The pool of players can be modified throughout the season.

Teams will carry active rosters of no more than 30 players at the start of the season. That group will be reduced to 28 after 14 days and to 26 after 28 days. Teams will be able to bring with them on road trips a so-called taxi squad of three players, who would be eligible to replace an injured or infected player.

An asterisk indicates a player not on the 40-man roster.