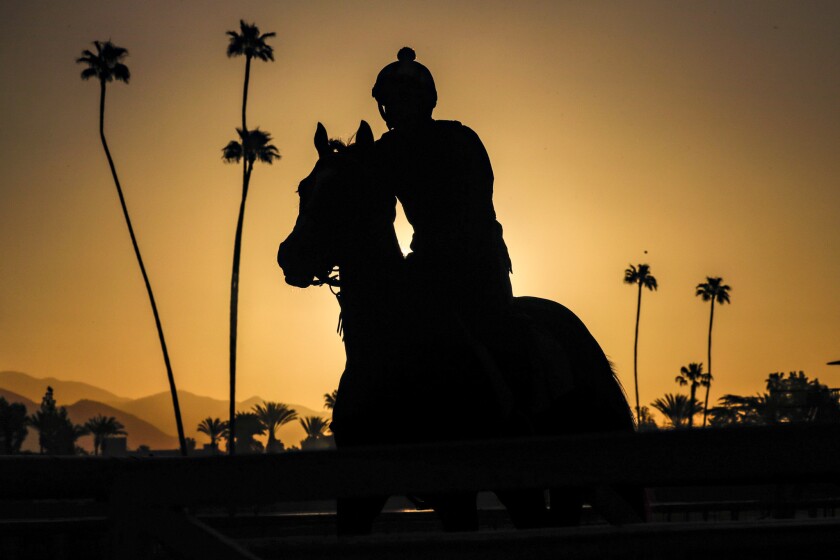 Santa Anita suffered its third horse death in three days when a freak accident occurred during morning training on Sunday.

Tikkun Olam, a 4-year-old gelding, collided with an unidentified other horse while training. The second horse appeared to be uninjured. Tikkum Olam was euthanized from undisclosed injuries.

So far, Santa Anita has had five deaths since Dec. 26, the scheduled start of the season. Because of rain, the actual start was Dec. 28. Six horses died at Santa Anita through this date last year and 30 horses died overall during the winter-spring meeting.

Tikkun Olam was trained by Eric Kuljac. The gelding had one win in nine starts and last raced at Del Mar on Aug. 28, where he finished sixth. The Florida-bred was last purchased as a yearling at Keeneland for $32,000.

Sunday’s death was not caused by a “catastrophic” single-horse breakdown, which has been at the epicenter of national scrutiny on safety in the sport.

Sunday’s fatality was the first on the main-track dirt surface this racing season. Previously, three of the deaths occurred on the turf course while racing and one on the training track, considered the safest surface. Last year, the emphasis was centered on the safety of the dirt track.

In the midst of an existential crisis that has impacted horse racing nationally, the Stronach Group, which owns Santa Anita and other tracks, implemented the strict medication rules in the country. In addition, the major track organizations formed the Thoroughbred Safety Coalition to try to bring uniformity to racing rules currently regulated by individual states.

The rules, however, addressed issues, such as the use of Lasix and the riding crop, which have not been tied to breakdowns. It was part of a move designed to change public perception of the sport.

There is also the Horse Racing Integrity Act, a bipartisan effort in Congress, which is hoping to create a body that would oversee medication at all tracks and other oversight issues. The Act does not have industrywide support, mostly because of the lack of specificity on how things will be implemented.

Similar legislation has also been proposed in Sacramento for California tracks, but, it too lacked specifics on what measures would be implemented.

Gov. Gavin Newsom and U.S. Sen. Dianne Feinstein (D-Calif.) have also been critical of the increase in horse deaths in California. Both have indicated that if improvements are not made that the sport could be in jeopardy.

There is also the possibility that an amendment could be placed on the California ballot that could outlaw horse racing in the state. However, at this point, there is no indication that the antihorse racing factions have the signatures to get it on the ballot.