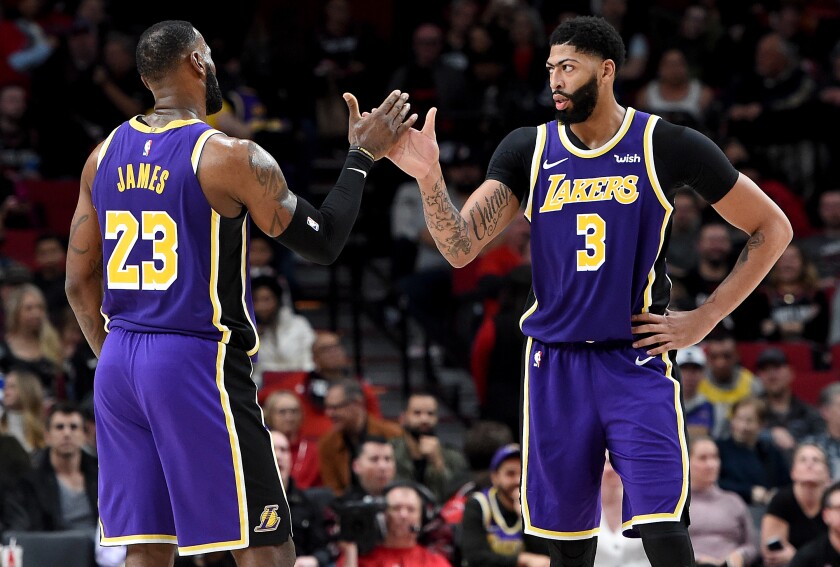 Anthony Davis is questionable for game against Dallas

As the Lakers took off for Dallas on Thursday, it was unclear whether they would have Anthony Davis for Friday’s game against the Mavericks.

Davis is listed as questionable after sustaining a bruise on his buttocks during Tuesday’s game against the New York Knicks. If he isn’t able to play, Lakers coach Frank Vogel plans to start Kyle Kuzma in his place.

“Obviously he’s a big factor in everything we do so we would have to compete to win a game differently,” Vogel said. “But it’s a great opportunity for Kuzma to step into the starting lineup and play a bigger role.”

Davis watched film with the team on Thursday. It was a limited group. LeBron James was limited with flu-like symptoms and Avery Bradley left early due to illness before rejoining the team for the flight to Dallas.

The Lakers want to be cautious with Davis.

“it’s really case-by-case,” Vogel said. “We want guys playing through pain when they need to, but we don’t want guys compromising themselves or putting themselves at risk by playing through injury. That’s sort of what we feel is the difference, that this is a significant injury that we want to make sure we’re being cautious about. But he’s made pretty good progress from the time of the injury until now, so we’ll see how he is tomorrow.”

Davis was at practice but did not participate or address reporters. He left Staples Center on Tuesday night on a motorized cart without speaking to reporters.

If Davis is unavailable, it will mark the second time Kuzma has started this season. He was injured when the Lakers played the Pacers.

“I’m not Anthony Davis, so I’m just gonna be myself,” Kuzma said Tuesday, when asked about the possibility his role would increase if Davis missed time. “And just do me.”

In his start against the Warriors, Kuzma played 30 minutes and 15 seconds and made seven of 12 shots, including three of six threes, for 22 points. It was one of four games this season in which Kuzma has eclipsed the 20-point threshold. Overall this season, Kuzma has averaged 12 points and 3.6 rebounds per game.

“For Kuz it’s not really going to be any different than what we’re asking him to do throughout, whatever role he’s in,” Vogel said. “Whether he’s coming off the bench or stepping into a starting role, we want him to be aggressive looking to score, but having a mindset like the rest of the team to make the right play.”

James overtook Milwaukee’s Giannis Antetokounmpo and Dallas’ Luka Doncic in All-Star fan voting in the returns released by the NBA on Thursday. James now leads all players in the Western Conference by more than 80,000 votes.

Fans account for 50% of the vote to select the 10 starters for February’s All-Star game. All NBA players and select members of the media constitute the other half of the voting.

Update: The Mavericks will be without Kristaps Porzingis, who reportedly received a platelet-rich plasma injection in his knee. Dallas has slid to sixth in the Western Conference standings, having gone 5-5 in its last 10 games.