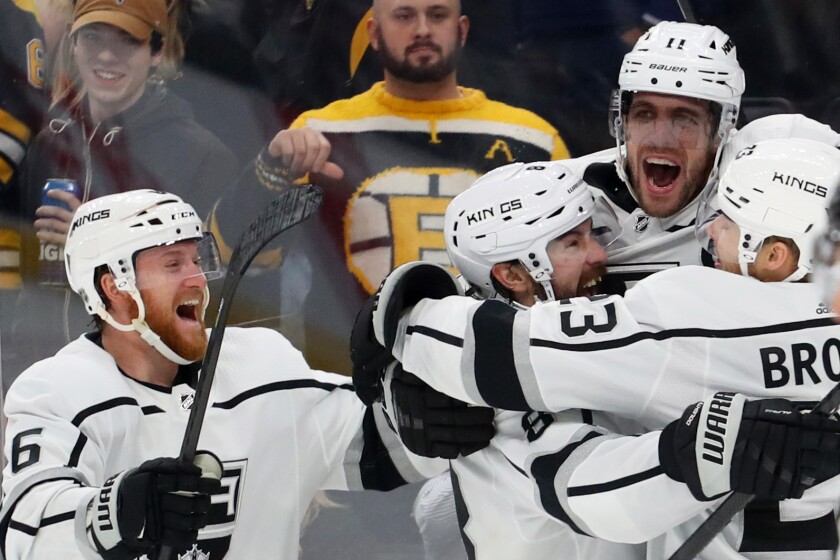 Jonathan Quick preserved a tie just long enough for Anze Kopitar to win it for the Los Angeles Kings and extend their best stretch of the season.

Quick stopped 37 shots, three of them in overtime before Kopitar beat Tuukka Rask on a wrist shot at 3:23 of OT to give the Kings a 4-3 win over the Boston Bruins on Tuesday night.

“Any overtime is a good opportunity,” Kopitar said. “We gave up a couple of chances. Quickie was good. He was able to stop them and we cashed in on the win.”

After outshooting the Kings 16-8 in the third period, only to allow the tying goal with 2:01 left in regulation, the Bruins were dominating again in overtime but Quick continued coming up with saves.

Quick stopped Anders Bjork alone in front midway through the overtime, then got Patrice Bergeron to shoot wide of the net on a breakaway less than a minute later. Kopitar gathered a loose puck near his own blue line, took it straight up the ice and beat Rask with the game-winner.

“I couldn’t be happier for the guys. They had to put a lot into that game to win,” Los Angeles coach Todd McLellan said. “There’s a lot of happy Kings in the locker room after. They deserve to celebrate.”

Los Angeles, which entered the game with 31 points — the lowest total in the Western Conference — won for the fourth time in five games, five games and extending their best stretch of the season (4-0-1).

“We just kept playing, kept plugging away and at the end of the day it worked for us,” Kopitar said.

Blake Lizotte had a goal and an assist for the Kings, who couldn’t hold on to leads of 1-0 and 2-1 before rallying for a thrilling finish. Down 3-2 late in the third, the Kings pulled Quick for an extra skater and tied it on Matt Roy’s slap shot with 2:01 left in regulation.

Danton Heinen had a goal and assist for Boston, which fell to 1-5-1 in its last six and has lost two straight at home.

“I thought we certainly played well enough to win. Not very happy getting only one point tonight,” coach Bruce Cassidy said.

Patrice Bergeron and Brandon Carlo also scored and Rask had 23 saves for the Bruins.

“You’re out there. You’ve got to give your team a chance to win and make those timely saves,” Rask said. “Today, I didn’t make any so that’s the result.”

Bergeron tied it at 2-all 10:44 into the second on a wrist shot from above the right circle, his third goal in five games.

Carlo’s goal 1:24 into the third gave Boston its first lead at 3-2. He scored from inside the blue line on a wrist shot that Quick got a piece of but couldn’t control after Heinen dug the puck out of a scrum in the corner.

Heinen was credited with an assist, his second point of the night after snapping a six-game scoreless streak on a power-play goal with 59 seconds left in the first to tie it at 1-all.

The Bruins were caught with too many men on the ice one minute into the game and Lizotte made them pay with a power-play goal at 2:17, deflecting a shot by Jeff Carter past Rask to put the Kings up 1-0.

Kempe sprung free for a short-handed breakaway and put the Kings up 2-1 at 2:45 of the second after Quick stopped a one-timer by Marchand.

“It’s huge. It won us the game, essentially,” Lizotte said of the Kings’ special-teams play. “It’s hard to score 5-on-5 in this league.”