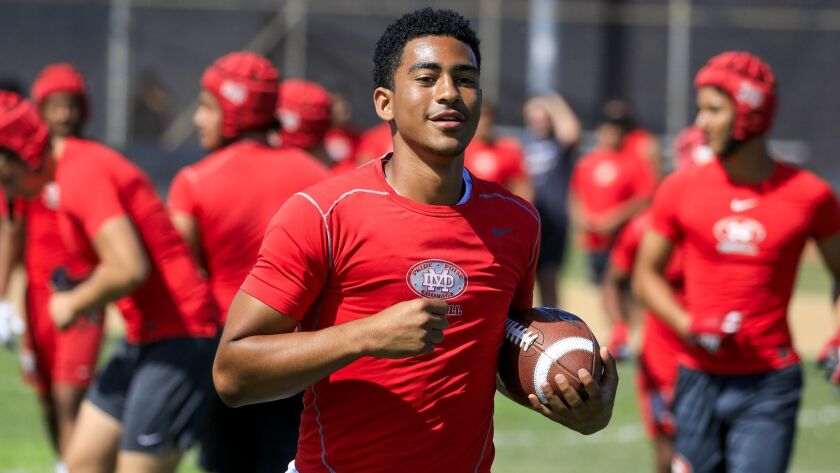 As Tua Tagovailoa heads for NFL, Bryce Young ready to compete at Alabama

Craig Young was working out on a treadmill at a hotel in Tuscaloosa, Ala., on Monday morning when he learned that Alabama quarterback Tua Tagovailoa had made the decision to skip his senior season and declare his intent to enter the NFL draft.

He said when he heard the news he was both excited and nervous.

Craig and his wife, Julie, were helping shop for a shower curtain, blankets and cleaning supplies to help Bryce get settled in his dorm room. But just like that, their son’s situation got very interesting.

The quarterback who is leaving Alabama left his own mark when he was a first-year member of the Crimson Tide. Two years ago, freshman Tagovailoa came off the bench in the College Football Playoff championship game and sparked Alabama’s overtime win over Georgia. As a starter the last two seasons, he passed for 76 touchdowns with only nine interceptions. His status as an NFL prospect was only in question because he was still recovering from surgery on his hip that dislocated during a Nov. 16 game against Mississippi State.

“It’s a unique situation,” Tagovailoa said while announcing his decision with Alabama coach Nick Saban at his side. “With my hip, a lot of the guys and general managers and owners that I’ve gotten to talk to have said the same thing. They kind of look at this injury as a knee injury almost, even though it’s not.”

He said it’s like they’re wondering whether they should “take a chance on this guy, or would he be able to possibly do a pro day before the draft. The biggest thing they want to see is that we can move and be back to how we were playing prior to the injury.”

With Tagovailoa out of the picture, Young will compete this spring with backup Mac Jones and Tagovailoa’s younger brother, Taulia. Jones started four games and led Alabama to a Citrus Bowl victory over Michigan. Alabama is set to open the 2020 season Sept. 5 in Arlington, Texas, against USC, the school Young committed to orally before changing his mind and settling on Alabama.

Steve Clarkson, a Southern California-based quarterback tutor, said he expected Young to make a strong bid to start. Clarkson is a producer for the Netflix series “QB1: Beyond the Lights,” which will feature Young next season.

“Bryce’s anticipation level is probably better than anyone I’ve seen in the last 20 years,” he said. “He’s just unbelievably accurate, and his ability to see things before anyone else is what legends do. You can’t teach that. It would not be a surprise to see him starting Day One at Alabama, and no offense to the other kids. But they’re not going to hand him the job.”

Competition is something Young embraces. When he enrolled at Los Angeles Cathedral High as a freshman, he had to share time and compete with a senior quarterback. Young then transferred to Mater Dei before his junior year, and he faced comparisons to the player he would replace, J.T. Daniels, the Gatorade national player of the year.

Asked whether Bryce was ready for the challenges ahead, Craig Young said: “One never knows for sure. The way I look at it, your previous experience can [determine] what your future experience can be. Everything he’s done and the choices he’s made and playing at the highest level have prepared him ... but we understand the magnitude of what he’s trying to accomplish. I have all the confidence in the world in him.”