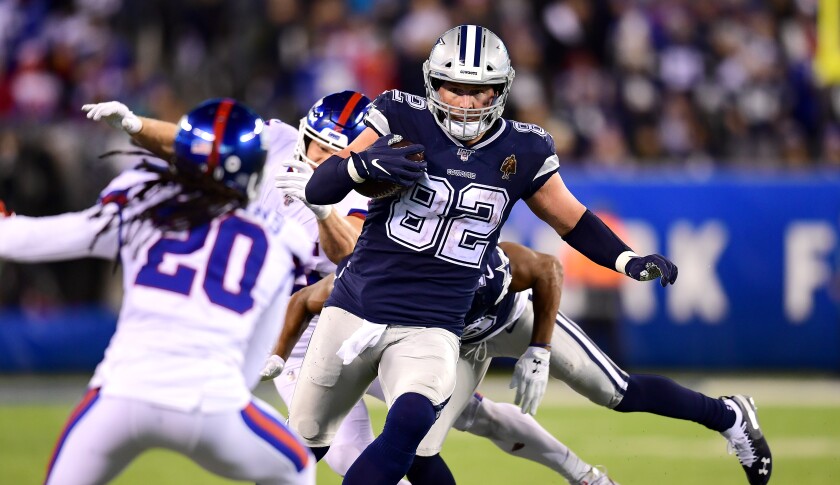 Is Jason Witten having a pretty good season or what? Has that ever happened before, with a retired player coming back after a year off?

Farmer: The Witten story is amazing, the 11-time Pro Bowl tight end coming out of retirement, and leaving the “Monday Night Football” booth, to rejoin the Dallas Cowboys — and making a significant contribution, no less.

He was targeted nine times in a 37-18 victory over the New York Giants on Monday, making a team-high eight catches for 58 yards.

Several star players have retired and unretired over the years. Reggie White, Ricky Williams, Marshawn Lynch and Randy Moss each took two-year breaks. Brett Favre called it a career three times — with Green Bay, the New York Jets and Minnesota. And Deion Sanders hung up his cleats with Washington in 2000, only to resurface with Baltimore in 2004.

It’s nonetheless impressive that the 37-year-old Witten is still out there and getting the job done at a position that demands remarkable athleticism.

To get some perspective on the feat, I reached out to ESPN “Monday Night Football” analyst Booger McFarland, a defensive tackle who won Super Bowls with Tampa Bay and Indianapolis and called games with Witten last season.

“The thing that impressed me most Monday night was just the ability for his body to be back in shape,” McFarland said. “Because here’s what happens when you play football: Training camp gets your body used to contact, and your body starts to callus up. From your fingers, to your skin, your body gets used to getting hit. And when you do that over a period of time, it takes less and less time for that to happen. He’s played for 15, 16 years [Witten was drafted in 2003].

“Well, when you take a year off, all of that callus that’s built up is gone. It’s almost like going to the spa every day, and when you’ve got those calluses on your hands and they shave them off, your hands are now nice and soft. So for him to be back out there and adapt to that physicality and that hitting, to me that’s the most remarkable part.

“I know if somebody would have just tapped me on the shoulder a couple years after I retired, I probably would have just fallen down. But he’s out there hitting people, being physical and playing well. He’s not the best tight endin football, and he knows that. But if you look at the role he has with the Cowboys, he’s playingthe role well ... and I truly believe he’s enjoying football now just a little bit more than he did whenhe left.”

How do teams determine which color jersey they wear? Does the home team decide?

Farmer: The home team decides, and has to submit its list at the end of the offseason — in June, once organized team activities are completed — committing to which color jerseys it will wear for each game. The visiting teams then wear the opposite.

Teams can wear their two primary jerseys (solid color, white) as many times as they wish, and can wear their throwbacks, color rush or alternate jerseys three times during the season. Besides the two primaries, a team can choose two other jerseys in their wardrobe, so there’s a maximum of four.