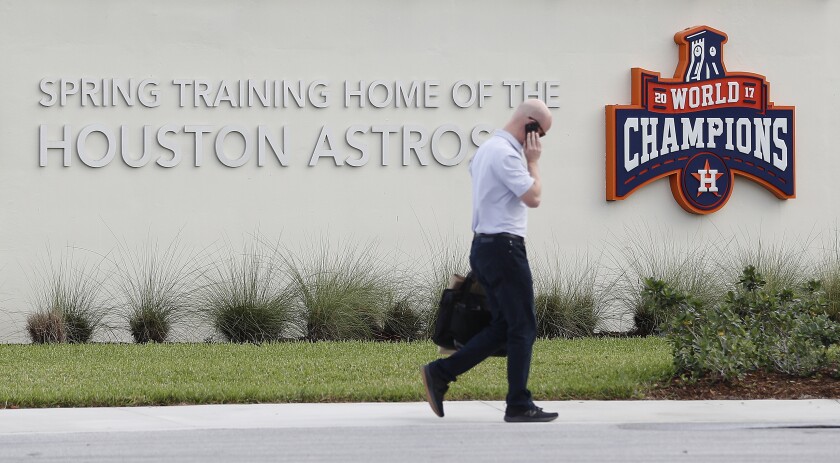 Houston Astros owner Jim Crane apologized Thursday morning for the sign-stealing scheme his team used during the 2017 and 2018 seasons. But Crane also said he doesn’t think the team should vacate their 2017 World Series title and does not feel it’s necessary to reach out to the Dodgers, the team Houston beat in seven games to win that championship.

Crane and several other members of the organization addressed the scandal that has consumed the MLB offseason during a news conference at their spring training facility in West Palm Beach, Fla.

“I want to say again how sorry our team is for what happened,” Crane said. “I want to repeat this will never happen again on my watch.”

Only two players — Jose Altuve and Alex Bregman — spoke at the news conference, for a total of 90 seconds before retreating to the clubhouse. Neither player delved deeply into the sign-stealing scandal that prompted an investigation by MLB and resulted in one-year suspensions and the eventual firing of Astros manager AJ Hinch and general manager Jeff Luhnow.

However, players spoke individually to the media after the news conference and many issued seemingly heartfelt apologies. The entire Astros team met Wednesday night to formulate their message when the media descended on their spring training facility Thursday.

For those disapppinted in #Astros televised apology, and rightfully so, know that Alex Bergman, Jose Alltuve, Carlos Correa, George Springer and Josh Reddick stood at lockers for half an hour and took some considerable heat.

“That was the first time we’ve all been together since the season ended,” outfielder George Springer said. “It was a productive meeting. The amount of remorse and regret was very obvious to us. . . There is no real way to express how much regret we have, how much remorse we have.

“I feel horrible for our sport, our game, our fans, our city, our organization. Just fans in general. The way our team is being viewed is unfortunate.”

Correa was asked why no players stood up and insisted the team put a stop to illegal sign stealing.

“We should have stopped it at the time, we didn’t, and we are paying the price for it now,” he said. “We have to face responsibility for our actions. . . . There’s no excuse for that. We were wrong. Looking back at it, it was bad.”

Carlos Beltran, a respected veteran player, and Alex Cora, the Astros bench coach, both lost their jobs as major league managers because of their involvement in the 2017 sign stealing. The MLB investigation specifically pointed to their leadership role in the scheme.

Infielder Alex Bregman, however, said Beltran and Cora should not be scapegoats.

Although the MLB report described the cheating scheme as “with the exception of [bench coach] Alex Cora, player-driven and player-executed,” Crane said his players should not be punished.

“These are a great group of guys who did not receive proper guidance from our leaders,” Crane said.

Crane said he agreed with the league that the Astros should not have to vacate their 2017 World Series title and – in what would appear to be a tone-deaf response to the Dodgers and their fans – suggested the cheating played no role in the outcome of the 2017 season.

“This didn’t impact the game,” Crane said. “We had a good team. We won the World Series.”

Crane said the Astros were apologizing “because we broke the rules” but would not concede that doing so gave the Astros a competitive advantage.

Jim Crane: "I want to say again how sorry our team is for what happened. I want to repeat this will never happen again on my watch."

But Crane also said of the sign-stealing scheme: “This didn’t impact the game. We had a good team. We won the World Series.”

Jim Crane: "This didn't impact the game. We had a good team. We won the World Series."TONE DEAF

He added: “I don’t think I should be held accountable” and “I don’t feel it’s necessary to reach out specifically to the Dodgers.”

Jim Crane: "I don't think I should be held accountable."

#Astros owner Jim Crane: “I don’t feel it’s necessary to reach out specifically to the #Dodgers.”

More from the Astros’ news conference, which also featured new manager Dusty Baker, who was hired this offseason:

Jim Crane: "We're apologizing because we broke the rules." He won't concede breaking the rules gave the Astros an advantage.This press conference was an absolute disaster for the Astros.

Jim Crane said he agrees with Rob Manfred that the Astros should not have to vacate their 2017 World Series title.

Dusty Baker: "At that meeting last night, the players showed tremendous remorse, sorrow and embarrassment for their families, organization, city of Houston and baseball. I want to ask for the baseball world to forgive them for the mistakes they made."

Jim Crane: "These are a great group of guys who did not receive proper guidance from our leaders."MLB: "The 2017 scheme was, with the exception of Cora, player-driven and player-executed."

Josh Reddick says he doesn't feel like he needs to apologize to friends on other teams for what happened. Why? "Because I just don't think it's necessary"