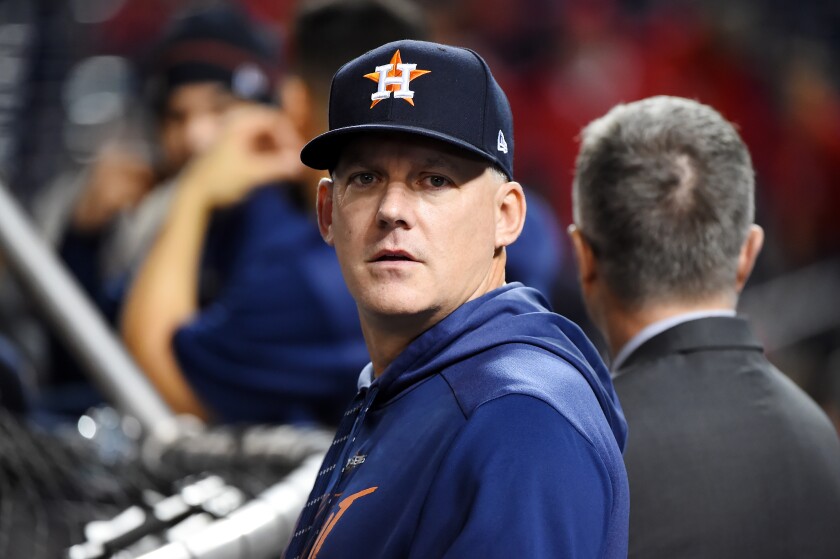 Houston Astros manager A.J. Hinch and general manager Jeff Luhnow were fired Monday after Major League Baseball revealed the results of its investigation into cheating by the club.

Owner Jim Crane announced the moves during an afternoon news conference in Houston.

Earlier, MLB said it had suspended Hinch and Luhnow for the 2020 season after finding the Astros had used technology to cheat. In addition, the team was fined $5 million and will forfeit their first- and second-round picks in the 2020 and 2021 drafts.

“I find that the conduct of the Astros, and its senior baseball operations executives, merits significant discipline,” commissioner Rob Manfred said in a statement. “I base this finding on the fact that the Club’s senior baseball operations executives were given express notice in September 2017 that I would hold them accountable for violations of our policies covering sign stealing, and those individuals took no action to ensure that the Club’s players and staff complied with those policies during the 2017 Postseason and the 2018 regular season.”

The league launched its investigation after pitcher Mike Fiers, who played for the Astros in 2017, told the Athletic that the team had stolen signs using a center-field camera that fed pictures to a television monitor behind the dugout, which would violate rules on how technology can be used during games. The league also is investigating whether the Astros might have engaged in similar behavior over the 2018 and 2019 seasons.

The Astros beat the Dodgers in seven games to win the 2017 World Series.

Also, individual Astros players will not be disciplined, Manfred said.

“Assessing discipline of players for this type of conduct is both difficult and impractical,” he stated. “It is difficult because virtually all of the Astros’ players had some involvement or knowledge of the scheme, and I am not in a position based on the investigative record to determine with any degree of certainty every player who should be held accountable, or their relative degree of culpability. It is impractical given the large number of players involved, and the fact that many of those players now play for other Clubs.

“But more importantly, the Club’s General Manager and Field Manager are responsible for ensuring that the players both understand the rules and adhere to them.”

The Associated Press contributed to this report.