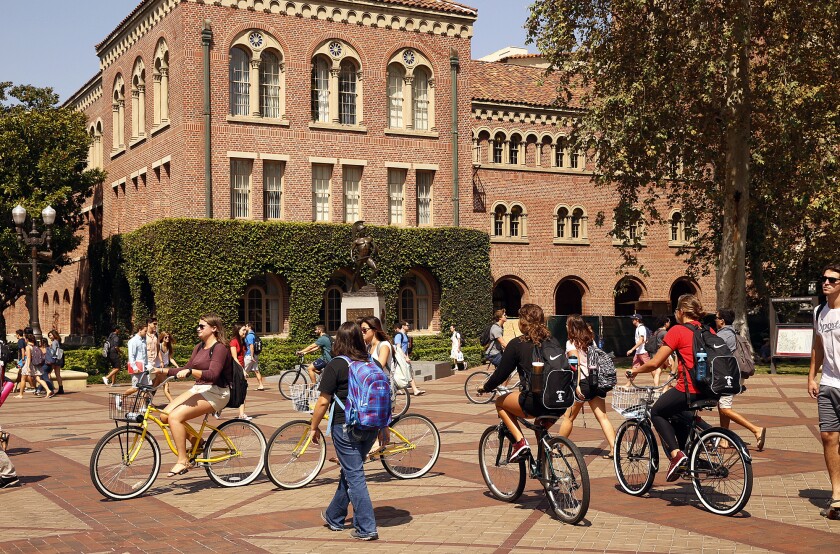 Athletes can return to USC campus Wednesday for voluntary workouts

USC student-athletes will begin a multiphase return to campus for voluntary workouts beginning Wednesday, the school announced in a statement Tuesday night.

Six teams — football, men’s and women’s basketball, women’s soccer, women’s volleyball and men’s water polo — will be included in the first phases of return from the coronavirus crisis, with only local returning athletes (living within about an hour commute of the school) allowed to initially begin training on campus.

The school said all student-athletes will be required to complete a pre-participation checklist — which includes a COVID-19 test and the signing of a “risk and shared responsibility acknowledgment form” — and that the athletic department’s medical staff “will make the final determination on a student-athlete’s clearance to participate in voluntary workouts.”

After the initial round of COVID-19 tests, the school plans to test its athletes weekly.

Football star Max Tuerk fell ill while on a long hike with his parents. Was CTE a factor?

“We approached this process with extreme patience, prudence, and the utmost regard for the health and safety of our student-athletes, taking time to learn from the experiences of our peers to refine our plans and processes,” athletic director Mike Bohn said in the statement. “We worked diligently to develop a comprehensive plan that enables our student-athletes to voluntarily return to USC to participate in workouts should they choose to do so.”

USC joins a host of other schools around the country in rolling out a tiered return to sports. Athletes at UCLA were allowed to begin coming back to campus Monday. Other Pac-12 Conference schools were able to return as early as June 15.

Dr. Sarah Van Orman, USC’s chief medical officer, acknowledged in the statement “the reality is that we expect to have positive tests and outbreaks in our university community, including in athletics.” She added that the Trojans “have been very thorough in planning for such occurrences and to prevent the spread of the virus.”

Included in those safety plans are daily symptom questionnaires for all individuals entering an athletics facility, temperature checks, face covering requirements, social distancing rules for weight room and on-field activities and specific laundry procedures. Player meetings with coaches will continue to be held virtually through at least the end of the month.

USC sent an email to Trojan Athletic Fund members Wednesday laying out instructions for fans to decide whether to opt-in or out of their season football tickets in 2020.

Athletes who test positive for COVID-19 will receive medical treatment and be required to isolate until cleared. While standard on-campus housing won’t be available, quarantine housing will be provided for those who contract the disease. The school will also conduct contact tracing and quarantine players who had come in contact with those who test positive.

According to the statement, Bohn informed players that they would not be penalized or face reductions in financial aid if they decide not to return for the voluntary activities. He emphasized the importance of responsible off-campus behavior from players.

“Those returning have a responsibility to protect our community at all times, not only when they are working out,” he said. “We expect them to adhere to all standards and restrictions in our restart plan so that their fellow student-athletes and our entire community remains safe and healthy.”

The school said student-athletes contributed to the planning process and that a survey was conducted this month to “assess the comfortability and desire of student-athletes to return to campus for voluntary workouts.” The school also created an online hotline to address questions from its players and said USC President Carol L. Folt and football coach Clay Helton hosted individual meetings with various student-athlete leaders. Helton also held an informational webinar with football parents.

“After a devastating few months, we are thrilled for them that they will be able to come back to campus to do what they love and continue their preparation for their upcoming seasons,” Bohn said. “With this return, we will continue to follow and adapt to all federal, state, county and university regulations, as well as recommendations from the NCAA, Pac-12 and USC athletics’ medical director.”