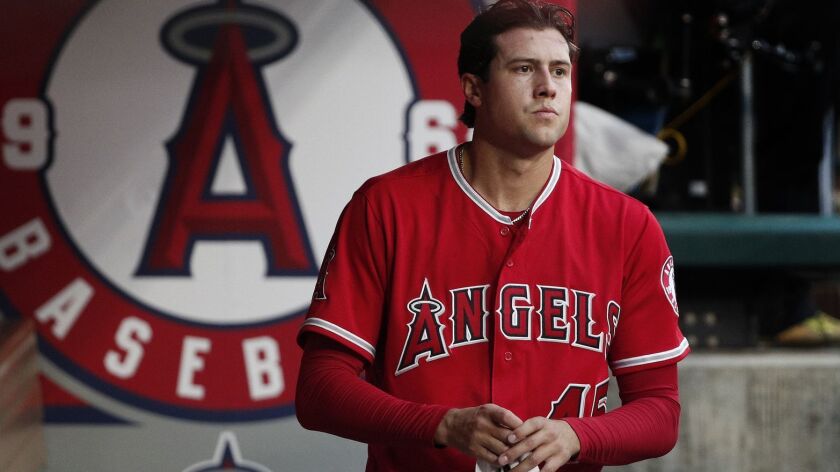 The attorney for an Angels employee who reportedly provided opioids to Tyler Skaggs described the pitcher as “an addict who overdosed.”

Eric Kay, who has worked for the team in media relations for 24 years, engaged Newport Beach criminal defense attorney Michael Molfetta nearly two months ago out of concern that he might be made a “scapegoat” in the investigation into the drug-related death of Skaggs.

On Saturday, ESPN reported that Kay told federal investigators he provided oxycodone to Skaggs and abused it with him for years.

Citing two people familiar with the investigation, ESPN also reported that Kay said two team officials were told about Skaggs’ drug use long before his death and that Kay gave U.S. Drug Enforcement Administration agents the names of five other players who he believed were using opiates while they were Angels. Tim Mead, Kay’s former supervisor with the Angels and now president of the Baseball Hall of Fame and Museum in Cooperstown, N.Y., is one of the employees implicated.

Mead told The Times on Saturday that Kay never mentioned to him that Skaggs might be an opioid user. “Eric and I conversed about a lot of things over the years,” Mead said. “Tyler and opioids were not one of them.”

The second employee who may have had knowledge of Skaggs’ opioid use, the Angels were told, was Tom Taylor, the club’s traveling secretary. Taylor denied it.

“Before Tyler’s death, Eric Kay never told me anything about Tyler or any player seeking narcotics, or about Eric providing narcotics to any player,” Taylor said in a statement to The Times.

John Carpino, president of the Angels, said in a statement: “We have never heard that any employee was providing illegal narcotics to any player, or that any player was seeking illegal narcotics. The Angels maintain a strict zero-tolerance policy regarding the illicit use of drugs for both players and staff. Every one of our players must also abide by the MLB Joint Drug Agreement. We continue to mourn the loss of Tyler and fully cooperate with the authorities as they continue their investigation.”

Molfetta could not be reached Saturday, but in a September interview with The Times, he acknowledged that Kay, 44, had been linked to the case.

Skaggs, 27, had the opioids fentanyl and oxycodone in his system along with alcohol when he was found dead in his Southlake, Texas, hotel room July 1 during an Angels road trip. The Skaggs family hired Houston criminal defense attorney Rusty Hardin to represent them. The Angels hired Fort Worth trial attorney John Cayce to represent them.

“The Skaggs family continues to mourn the loss of a beloved son, brother, husband and son-in-law,” Hardin said in a statement Saturday. “They greatly appreciate the work that law enforcement is doing, and are patiently awaiting the results of the investigation.”

Kay was on the team’s June 30 charter flight to Texas and stayed in the team’s Southlake hotel the night Skaggs died. He worked during the series in Texas on July 2-4 but took a leave of absence in mid-July. Though Kay has not reported to work since, Molfetta said he is still an Angels employee.

Agents learned about the oxycodone transactions between Kay and Skaggs after reviewing text messages between the two, ESPN reported, citing sources. Kay also reportedly told investigators that Skaggs snorted three lines of crushed opioids in front of him in the Texas hotel room but that Kay did not partake in the drugs with the player because he was on a medication that would have negated the effects.

A review of Venmo transactions showed payments between Skaggs and Kay, although for what is not clear. The latest payment reviewed by The Times was from April.

ESPN reported that Kay’s mother, Sandy, told the network’s “Outside the Lines” show that her son started abusing opioids a few years after his father died in 1998 and that Kay is currently in outpatient treatment for substance abuse. Kay could not be reached for comment Saturday.

Skaggs’ family members issued a statement after his death saying they were “shocked to learn that it may involve an employee of the Angels. We will not rest until we learn the truth about how Tyler came into possession of these narcotics, including who supplied them.”

Asked by The Times if his client supplied any of the illegal substances that Skaggs used, Molfetta said, “I can state unequivocally that anyone who blames Eric Kay for Tyler Skaggs’ death is incorrect. Trying to lay blame at any one person’s feet is not just morally wrong, it’s factually wrong.”

Major League Baseball launched an investigation into Skaggs’ death based on the family’s statement about an Angels employee perhaps being involved. MLB deputy commissioner Dan Halem told The Times in late September that the investigation was on hold until the DEA and Southlake police probes were completed.

The league does not plan to accelerate its investigation, even with the allegation that other players might be identified as users.

Reports and information from the police and other first responders related to the incident have not been released. The Times and other news organizations have sought the material, but an attorney representing the city has asked the Texas attorney general for guidance on whether the records are exempt from disclosure laws. No decision has been made.

Opioids such as fentanyl and oxycodone can only be legally obtained and possessed with a medical prescription.

Attorneys have said that tens of millions of dollars could be at stake in a potential wrongful-death lawsuit if it can be proven a party besides Skaggs might be at least partially responsible for his death.

“The young man obviously had a problem and he paid a very high price for his problem, and sometimes that’s the way life works,” Molfetta said. “Sometimes you make a series of horrible decisions and you pay a very high price.”