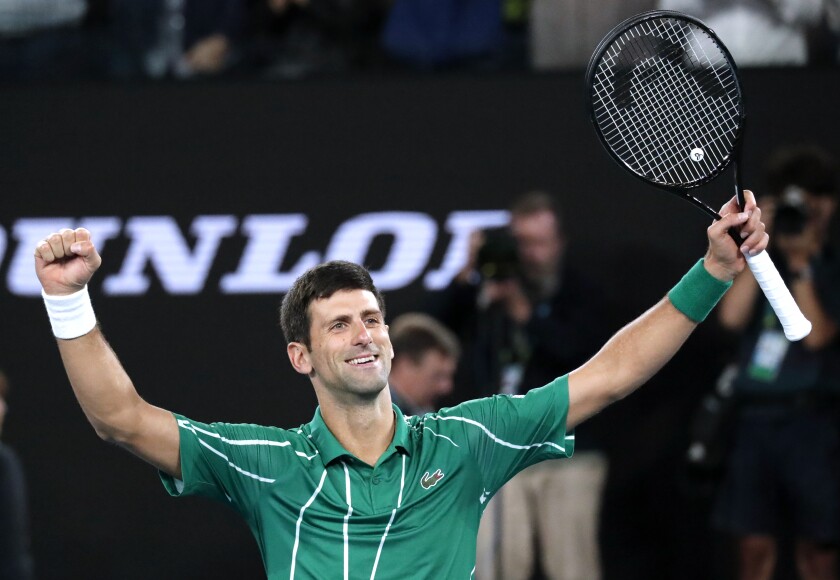 Djokovic did what he does, though. He refused to lose, waited for a chance to pounce and found his best tennis when absolutely necessary. Even threw in a wrinkle, serve-and-volleying twice when facing break point.

Regaining his stamina and strokes, and showing some gutsy creativity, Djokovic came back to edge Thiem 6-4, 4-6, 2-6, 6-3, 6-4 Sunday night for an eighth Australian Open title, second in a row, and 17th Grand Slam trophy overall.

“I was on the brink of losing the match. Dominic disrupted my rhythm in my game at one point. He was a better player,” Djokovic said. “Probably one point — and one shot — separated us tonight.”

Nonetheless, Djokovic improved his record in semifinals and finals at Melbourne Park to 16-0 and assured himself of returning to No. 1 in the rankings, replacing Rafael Nadal.

No other man in the history of tennis has won this hard-court tournament more than six times. Only Roger Federer, with 20, and Nadal, with 19, have won more men’s Grand Slam singles trophies than Djokovic.

“Amazing achievement. Unreal what you’re doing throughout all these years,” said the fifth-seeded Thiem, who is 0-3 in major finals. “You and also two other guys, I think you brought men’s tennis to a complete new level.”

Both finalists spoke about the devastating wildfires that have killed dozens of people and millions of animals around Australia. Djokovic also mentioned the recent deaths of retired NBA star Kobe Bryant and one of his daughters in a helicopter crash.

Addressing Thiem, Djokovic said: “I am sure you will definitely get one of the Grand Slam trophies. More than one.”

A little more than six months after saving a pair of championship points against Federer en route to winning a five-set Wimbledon final, Djokovic again showed that he can’t ever be counted out, coming back from two-sets-to-one behind in a Grand Slam title match for the first time.

It didn’t come easily for the 32-year-old from Serbia. He lost six games in a row in one stretch to Thiem, who plays a similar baseline game and eliminated Nadal in the quarterfinals.

Djokovic was visited by a doctor and trainer in the third set and, desperate to hydrate, guzzled bottles of water and energy drink. He lectured the chair umpire about time violations.

“My energy dropped significantly,” Djokovic said at his news conference, sipping an anti-oxidant drink instead of the Champagne offered by tournament director Craig Tiley.

This was not the dominant Djokovic who made a hard-to-believe total of nine unforced errors during his straight-set triumph over Nadal in the final a year ago. Djokovic eclipsed that total in the first set alone Sunday, finishing with 57.

It was a physical test offering plenty of entertaining exchanges, with 61 points lasting at least nine shots apiece.

“Of course,” he said, “I just feel a lot of emptiness right now.”

At two key moments, Djokovic abandoned his usual grind-points-out script and went on the attack, rushing to the net after a serve when facing a break point — first, at 2-1 in the fourth set, then again at 2-1 in the fifth.

It paid off both times.

“Not characteristic of me,” Djokovic said. “Kind of all-or-nothing.”

Making a charge as his less-experienced foe faltered, Djokovic broke to lead 5-3 in the fourth set, helped by a sloppy volley into the net tape, a double-fault and a bad forehand by Thiem.

He adds that haul to his five titles from Wimbledon, three from the U.S. Open and one from the French Open.

Thiem, an Austrian who is 26, was the runner-up to Nadal at Roland Garros each of the past two years and was again trying to become the first man born in the 1990s to win a major singles title.

Instead, the Big Three have won 13 consecutive Slams and 56 of the last 67.

“It’s unique in sports history that the three best players — by far — are playing in the same era,” Thiem said. “That’s what makes it very, very difficult for other players to break through.”

The status quo appeared in peril in the third set, when Djokovic merely watched and shook his head as a lob by Thiem curled over him and in. Djokovic didn’t chase it. It wasn’t entirely clear right then what the problem was, but perhaps he knew he needed to save some strength.

Heat, so often a factor in Melbourne, was not an issue. The crisp, cool conditions were pretty much ideal at the start, with a light breeze and the temperature around 70 degrees. That dropped as the natural light faded, first leaving a violet ceiling of sky before nightfall arrived, accompanied by alarmingly loud squawks from a flock of seagulls perched on steel railings atop the arena.

Not surprisingly, given his experience and expertise, Djokovic came out loose, limber and locked in. Of the initial half-dozen points lasting at least nine strokes, he won all six. Within 13 minutes, he was ahead 3-0, as a chorus of his nickname — “No-le! No-le! No-le!“ — rang out.

Undaunted, Thiem displayed praiseworthy patience, and when Djokovic’s aim and focus betrayed him, this became an intriguing contest.

At 4-all in the second set, Djokovic was warned by chair umpire Damien Dumusois for taking too much time before a serve. A poor drop shot found the net to set up break point, and Dumusois again cited Djokovic for letting the 25-second clock expire; the penalty was a fault. A tepid 85 mph second serve followed, and Djokovic flubbed a forehand to give Thiem a 5-4 lead.

As Djokovic walked to the changeover, he tapped Dumusois on the left shoe, gave him a thumbs-up, then sat down and told him, “You made yourself famous.“

That was part of a six-game run that gave Thiem the second set — Djokovic had taken 16 in a row since the opening round — and control of the third.

Just as it seemed Thiem might be on his way, Djokovic made a stand.

“It was anybody’s game, really. I knew that very early in the fifth set, it was crucial for me to make a break,” Djokovic said. “I had that mental edge again, and that was enough to win it.”