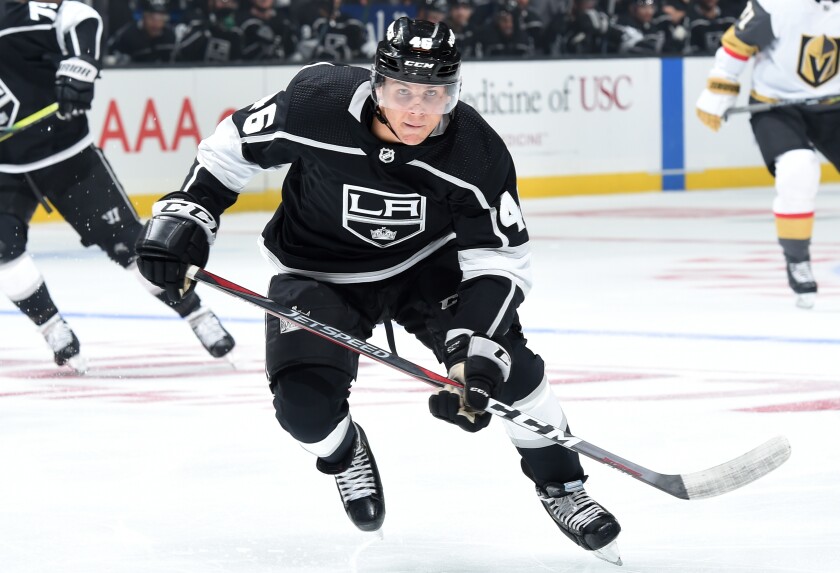 The week that changed Blake Lizotte’s life began with a loss.

On the final Friday of March, Lizotte’s sophomore season at St. Cloud State in Minnesota came to a screeching halt. His team entered the NCAA tournament as a top seed, only to get upset in the opening round. For the 21-year-old center, it was the closing of one chapter.

By the next Tuesday, a new one had begun.

Two years after going undrafted, Lizotte had turned himself into a coveted commodity. More than half a dozen clubs jockeyed for his signature. Five days removed from St. Cloud’s season-ending defeat, he chose to join the Kings.

The 5-foot-9, 175-pound center can smile at the memory now. He is cruising through his first full NHL season, already serving on the second line of the Kings’ rebuilding roster. Career firsts are coming seemingly by the week.

Sometimes, he still has to pinch himself. Who knew real life could feel like such a fantasy?

Seven months ago, he was wrapped up in a different wave of emotions.

Once his college season ended last spring, opportunities to sign in the NHL suddenly emerged. As an undrafted free agent, he had the option to either go back to school or embark on a pro career he once considered little more than a “pipe dream.” His future hung in the balance. And thanks to the NHL’s unique path for undrafted players, he had just days to decide.

“It was an emotional time,” Lizotte said. “Being sad about losing with my best friends and teammates, and also this lifelong goal being achieved. It’s kind of mixed emotions.”

Lizotte had popped up on the Kings’ radar during his time at St. Cloud State, catching the eye of team scout Brooks Bertsch (an alumnus of the school) during an all-conference career. But for most of last season, assistant general manager Mike Futa said, the franchise thought Lizotte would stay in college for his junior year.

Up until the last minute, Lizotte himself wasn’t completely sure either.

The Kings have a knack for developing undrafted free agents. They plucked Alex Iafallo, the left wing on their top line, out of Minnesota-Duluth in 2017. That same offseason, rookie defenseman Sean Walker joined the franchise out of Bowling Green on a minor league contract before signing an entry-level deal last year.

“It’s like found money,” Futa said. “If you do the homework and find a player you don’t give up assets for … it’s huge asset value.”

In Lizotte, the Kings appear to have uncovered another gem.

As a prospect, Lizotte’s gradual development arc always left him behind the curve. He hails from Lindstrom, Minn., a small lakeside town on the state’s eastern edge best known for its motto, “America’s Little Sweden.” His high school, Chisago Lakes, had never before produced an NHL player. When he made varsity as a freshman, he was 5-4 and 125 pounds “soaking wet,” he chuckled.

He was only slightly bigger by the time he moved onto to juniors two years later, scoring 52 points in 56 games with Minot in the second-tier North American Hockey League in 2014-15.

“That was interesting, to say the least,” he said. “A little guy like me, playing up the ice. I had to be faster than everyone.”

Lizotte was first draft-eligible after the 2015-16 season. Though he had 46 points in 54 games that year with the Fargo Force of the United States Hockey League (a level above the NAHL), he knew his name wouldn’t be called.

He had higher hopes for the 2017 draft (North American players remain eligible to be drafted until they turn 20) after upping his point total to 65 and becoming the Force’s captain. Yet, every NHL franchise passed on him again.

“There’s definitely some external motivation when it comes to being passed over,” Lizotte said. “But for me, it’s always been an internal drive.”

Unlike their NFL or NBA counterparts, undrafted hockey players often enroll in college after slipping through the cracks. Those good enough to turn pro usually do so several years down the line.

So, at St. Cloud State, Lizotte pushed himself. During his two collegiate seasons, he learned his game and crafted an identity as a dynamic, disruptive force up the middle of the ice. Slowly, he began popping up on NHL teams’ radars.

“He’s really good at saying, ‘Here’s who am I, here are my strengths, here are my weaknesses, here’s how I’m going to fit in,’” said Lizotte’s agent, Dan Plante, a former player with a history of representing undrafted players.

“He had a lot of clubs that were chasing him. I remember having conversations with him, where he fits in best and why. Also, the club’s ability to explain to the player why he fits in with them and the transition that some clubs are going through. He’s very diligent with his approach.”

To that end, the Kings were a near-perfect match. When Futa got word that Lizotte was contemplating the NHL, he quickly compiled a presentation and convinced the energetic two-way center that the Kings afforded him the best opportunity.

“We had all our ducks in a row, as far as how much we liked him,” Futa said, before comparing the condensed process to a track race: “We were ready to sprint. … There were other teams in the race who didn’t get him.”

Plante’s advice to Lizotte at the start of his career-altering week: “Be warned. It happens quick.”

Indeed, four days after signing his entry-level deal with the Kings, he made his NHL debut in their season finale. This preseason, he shined during the team’s rookie and training camps, forcing his way onto the club’s opening-night roster and earning the trust of coach Todd McLellan.

“[Kings assistant] Trent Yawney says he’s like a mosquito in a dark tent,” McLellan said. “He’s just a pest. He just keeps on going and going. I think a lot of the really good teams in the league have an Energizer Bunny, if you will, and that would be Blake in our case.”

Call it the honeymoon phase of Lizotte’s young career. Uncertain for so long, his future is suddenly shimmering. The player who twice went undrafted isn’t unheralded any longer.