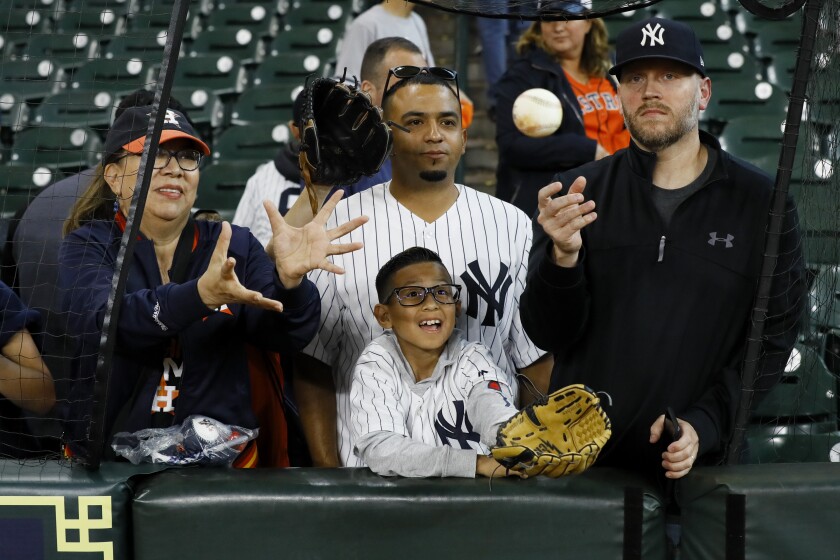 Boo the Astros at Angel Stadium? Yankees fans to join with thousands of Dodgers fans

The Angels are projected to set a record for payroll this season, so every bit of increased revenue helps. And, as an unforeseen consequence to the cheating ways of the Houston Astros, fans of the Dodgers are here to help fund the Angels.

Last month a Dodgers fan group purchased 800 tickets to the Angels’ home opener Friday April 3 against the Astros. The Astros are not scheduled to play the Dodgers this season, so Pantone 294 figured a trip to Anaheim would be in order.

The Astros were convicted of cheating in 2017, the year they beat the Dodgers in the World Series. For fans that might have been deprived of the first Dodgers championship parade since 1988, booing the Houston team could serve as an outlet for their frustration.

We come today to tell you demand is so high that Pantone 294 now has secured 2,727 tickets to the game.

Dodgers fans account for the bulk of the tickets, of course, but New York Yankees fans have gotten in on the fun too. In 2017, the Astros advanced to the World Series by beating the Yankees in the American League Championship Series.

“Dodger fans are taking their Yankee fan friends,” Pantone 294 co-owner Desiree Garcia said. “There are a lot of Yankee fans in L.A. that are not happy with the Astros.”

The friend of my enemy is my friend, or something like that. For that one night, Dodgers and Yankees fans will enjoy a game together, and in the same section. Fans of 27 other teams are welcome, too.

“As long as you’re not wearing Astros gear, you’re perfectly fine to sit with us,” Garcia said.

Pantone 294 is selling the tickets for $25 each. Neither Pantone 294 nor the Angels would say how much of a group sales discount the group got, but similar group tickets are available on the Angels’ website for $20 each. And, conservatively, let’s say the ticket buyers spend an average of $20 at the game on food, drink, parking, T-shirts, etc.

That’s $109,000 into the Angels’ treasury. And, when you’re adding about $10 million to your payroll by adding outfielder Joc Pederson and pitcher Ross Stripling from the Dodgers, all those Dodgers fan dollars are a welcome boost to the bottom line.