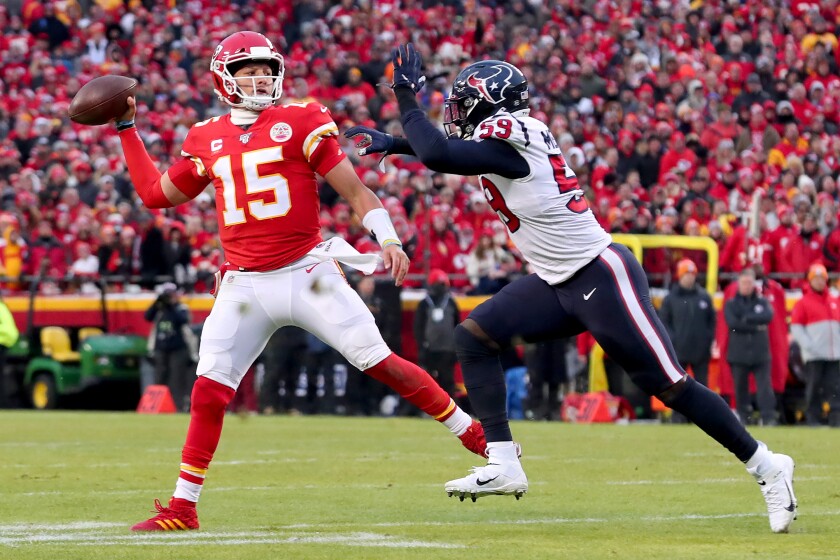 If most bookmakers get their wish, an against-the-odds playoff run by Derrick Henry and the Tennessee Titans will come to an end this week.

The Super Bowl would be much more of a wagering attraction with Chiefs quarterback Patrick Mahomes, the most electrifying football player on the planet, to promote on the marquee. Kansas City is a seven-point favorite over Tennessee in the AFC Championship on Sunday.

In the NFC title game, San Francisco is a seven-point favorite over Green Bay in what is essentially a win-win proposition with Jimmy Garoppolo facing Aaron Rodgers.

“I’m rooting for the two favorites,”said Nick Bogdanovich, William Hill sportsbook director. “I really would like to see a K.C.-San Francisco matchup. That would be a nice Super Bowl. Can you imagine the props you can do with that game?”

High-scoring passing offenses create better proposition bets, which is why Mahomes could help turn the Super Bowl into a record-breaking wagering event.

The conference championship games have three teams that are popular with the betting public and three star quarterbacks.

And then there is one Cinderella story. The Titans, who slipped into the playoffs as the AFC’s sixth seed, pulled off a remarkable underdog parlay by winning at New England and Baltimore in back-to-back weeks as Ryan Tannehill stunningly beat the GOAT (Tom Brady) and this season’s presumed MVP (Lamar Jackson).

Of course, Tennessee’s success is more about its defense and the battering-ram running of Henry, who totaled 377 yards in 64 carries in the two victories. Tannehill passed for less than 100 yards in each game.

William Hill opened the Chiefs as 7½-point favorites before smart money showed on the underdog.

“We took instant Tennessee action,” Bogdanovich said. “The Titans are not a popular public team, but I think they can go in there and run it on the Chiefs. Henry is a beast.”

Henry ran for 195 yards as the Titans, 10-point underdogs, overpowered the Ravens in a 28-12 win. Baltimore’s demise made the weekend’s bottom line for bookmakers.

“It was our biggest win of the NFL season,” said Jay Kornegay, Westgate SuperBook vice president.

The Titans upset the Chiefs in a wild 35-32 shootout in Week 10, when Henry rushed for 188 yards and two touchdowns. Mahomes passed for 446 yards and three touchdowns, yet Kansas City came up short in Nashville.

Mahomes’ most recent performance was more memorable. On the brink of being knocked out in the divisional round, the Chiefs trailed the Texans 24-0 before Mahomes rallied Kansas City to a 51-31 win while passing for 321 yards and five touchdowns. The Chiefs became the first team in NFL history to win a playoff game by at least 20 points after trailing by at least 20.

Mahomes against either Rodgers or Garoppolo seems like a dream matchup for bettors and bookmakers.

Rodgers and the Packers are out for revenge. Rodgers was sacked five times and limited to 104 passing yards in a 37-8 loss to the 49ers in Week 12. San Francisco closed as a 3½-point favorite in the first meeting, and the line is 7½ at some books for the rematch.

“The Niners made them look silly,” Bogdanovich said. “I thought six points was enough for this game. I didn’t think it should be a full seven.”

Bogdanovich is expecting the public to play the favorites and use the Chiefs and 49ers on six-point teaser wagers this week.

“No doubt about it, and I think both favorites will get there,” he said.

William Hill’s advance line for the Super Bowl is pick ‘em. The AFC was a three-point favorite last week before Baltimore was eliminated.

“I still think the Chiefs would be something — one or two points — over the 49ers,” Bogdanovich said.