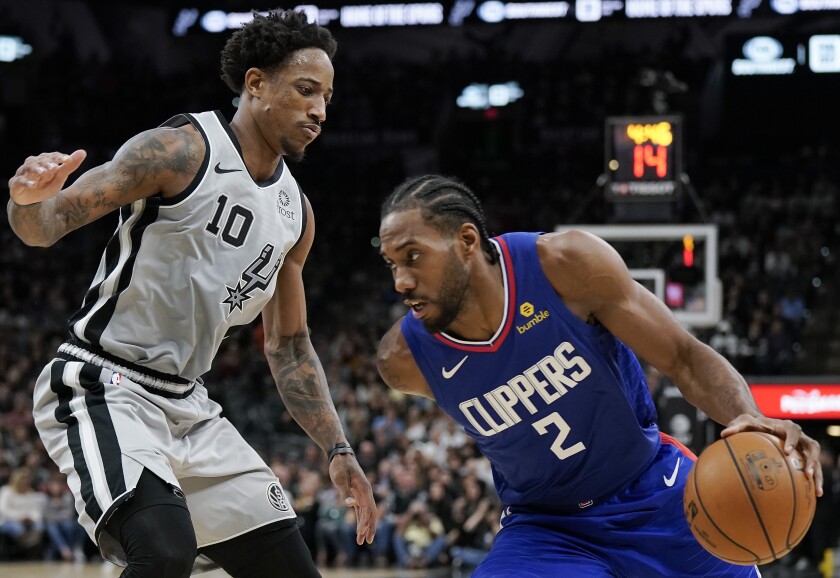 On the basketball court, Kawhi Leonard can be many things: A surgical passer, a one-man defensive wall, a most valuable player in the NBA Finals.

One thing he is not, however, is deaf.

When he stepped on AT&T Center’s court for warmups Saturday, he heard the boos begin. When he touched the ball every time after that, playing for the third time in San Antonio since leaving in 2018, he could hear as the volume increased.

Time has not healed all wounds deep in this part of Texas, not after a leg injury, a lost season, a disagreement over its diagnosis and a trade demand set in motion a painful breakup between a Spurs franchise and low-profile star who seemed so perfectly paired. He called himself unaffected by the treatment, in part, because he believes he understands its source.

“Just the way I probably left and how it was portrayed, and the narrative was portrayed in the media,” Leonard said.

But if there remain different interpretations about the circumstances surrounding his exit, there was no disagreement about what happened upon his latest return Saturday.

“It was the sharpest I’ve seen him,” Clippers coach Doc Rivers said.

Leonard’s 26 points, nine assists, seven rebounds and four steals in 27 minutes were central during a 134-109 Clippers rout, with no stretch more telling than his start to the third quarter.

Two days after the Clippers allowed a sizable halftime lead against Houston to slip away during an undisciplined third quarter that eventually led to a dispiriting loss, Rivers’ team gathered at halftime.

Mindful that San Antonio had shot 50% in the first half, the Clippers spoke of not allowing their strong finish to the second quarter, in which they outscored San Antonio 28-17 during the final 7:59 to lead by 11 at halftime, to unravel again.

Leonard made sure of it. He drove into the lane and dished to Ivica Zubac for an easy dunk on the first possession. One minute later, Leonard stole a perimeter pass from Dejounte Murray, bowled past Bryn Forbes in transition and dunked for a 17-point Clippers lead.

The stretch proved to be a running theme.

Of the Clippers’ eight third-quarter dunks, five were the result of forcing a San Antonio turnover. Rivers didn’t run an offense so much as he observed a layup line. Leonard had four dunks on the night.

Eighteen Spurs turnovers became 36 points for the Clippers, which in turn fueled the 74 points they scored in the paint. The Clippers alternated between a zone and man defense, but the constant was their long arms disrupting passing lanes.

“We won the game with our defense,” said Paul George, who scored 11 points, with five rebounds and four assists before resting the fourth quarter along with many of the team’s key rotation players ahead of Sunday’s game in Oklahoma City. “We’re a great team when we turn our defense into offense and become a transition team.”

The Clippers outscored the Spurs by 16 in the third quarter and made 54% of their shots overall.

Montrezl Harrell added 21 points and Lou Williams 20 off the bench for the Clippers (22-9), who hope Leonard’s performance in front of a hostile crowd can become the model for George’s return Sunday to Oklahoma City for the first time since requesting a trade in July.

“I don’t know how they’re going to perceive him or receive him with the Clippers, but if there is boos it only can help our team,” Leonard said.

George has already endured a hostile reunion once this season, in Indiana, an environment that will prime him for whatever comes against the Thunder.

“I don’t know how it’s going to go,” George said. “I don’t think it’s going to be worse than Indiana. … At this point and this part of the season, I’ve seen it all. I’m prepared. I’ll be ready to expect cheers or boos.”

As Leonard noted, boos do not necessarily need to be taken as a bad thing. Especially when they grow quiet amid a victory.

Update: Sunday marks Clippers forward Paul George’s first game in Oklahoma City since requesting a trade from the Thunder (15-15) in the offseason. George played two seasons with the Thunder before being dealt to the Clippers on July 5 in exchange for five draft picks and two future pick swaps as well as Los Angeles starters Danilo Gallinari and Shai Gilgeous-Alexander. Gallinari’s 90.3% shooting on free throws ranks sixth in the NBA and the forward has made made 39.5% of his three-pointers. Gilgeous-Alexander is coming off a career-high 32-point performance Friday against Phoenix.