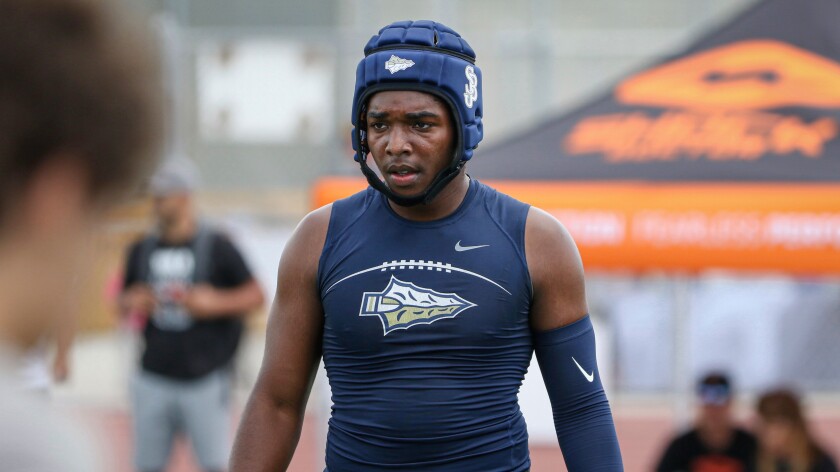 The first Wednesday of February used to be something of a national holiday for college football fans. It was like a second Christmas as they sat around their TV or computer and watched for news of faxes arriving into the athletic department of their favorite school. Each fax represented the addition of a new prospect to the school’s football team.

The vast majority of top players sign in December with a few waiting to announce their commitments at the All-American games that take place the first week of January. Of the top 250 prospects, per the 247Sports Composite rankings, only 32 remain unsigned after the early signing period and 13 of those are expected to commit during live ceremonies held at the nationally televised Under Armour All-America Game or All-American Bowl.

That includes the top three unsigned players from Southern California: Gary Bryant Jr., Darion Green-Warren and LV Bunkley-Shelton are scheduled to announce their commitments at the All-American Bowl on Jan. 4. Bru McCoy, Kyle Ford and Chris Steele all announced during the game last year and enrolled in college after returning from the trip to San Antonio. (All three are at USC now after Steele transferred from Florida and McCoy transferred from Texas.)

McCoy, Ford and Steele represented a third of the unsigned players ranked among California’s top 85 a year ago. There is more unsigned California talent available after all the ink dried this year. When the three-day early signing period came to a close Friday night, 17 Southland prospects among the state’s top 100 players remained unsigned.

Here’s a look at Southland players who did not sign during the early period. (State ranking, per the 247Sports composite rankings.)

The speedy four-star wideout took official visits to Arizona State, Oklahoma, Oregon, USC and Washington, but has long been a Trojans lean.

The former Oklahoma commit was long considered a USC lean, but the physical four-star defensive back took a December official visit that seemed to swing things toward Michigan.

A playmaker that combines terrific route running and explosiveness. Some schools see him as a receiver while others think he’s a better cornerback. He took official visits to Arizona State, Nebraska, Ohio State and USC. The Sun Devils look like the leader for the four-star prospect after USC was in front for much of the season.

Hard-hitting safety who could be moved into the box at the next level. Committed to UCLA.

Son of USC legend and former No. 1 NFL overall pick Ron Yary. Jack was committed to the Trojans but opened up his recruitment and took an official visit to Washington. He has trips to USC and UCLA planned for January.

A long and lanky player who can drop into coverage or attack the quarterback off the edge. Many expected him to follow older brother John to USC, but Justin is looking for the right fit.

He was set to commit in August, choosing from a top five of Auburn, Georgia, Oklahoma, Tennessee and USC, but dropped off the radar after leaving Narbonne High.

He committed to UCLA in June but has some work to do academically before he can sign.

Wallace was slowed by an ankle injury for much of his senior season after having 15 touchdowns as a junior.

He had a four-touchdown performance against Lake Forest El Toro and four interceptions on the season.

The Stanford commit will sign in February after a 13-sack senior season.

Tanuvasa released a top five of Brigham Young, Boise State, Oregon State, UCLA and Utah in November, but wants to take his five official visits before making a decision.

Publicly committed to Arizona State, Stewart has been looking for a suitor after the Sun Devils picked up some higher-rated receiver commits.

One of three Cavaliers committed to Nevada Las Vegas but waiting to see how the full coaching staff shakes out after coach Tony Sanchez was fired in November .

Bell had a big senior season with more than 100 tackles and 24 sacks, according to MaxPreps. He took an official visit to Arizona State but may find more opportunities at a Mountain West school.

Tupe played on both sides of the line as a junior but missed the first five games this season. He’ll have an opportunity to showcase his skills in the Polynesian Bowl all-star game in Hawaii.