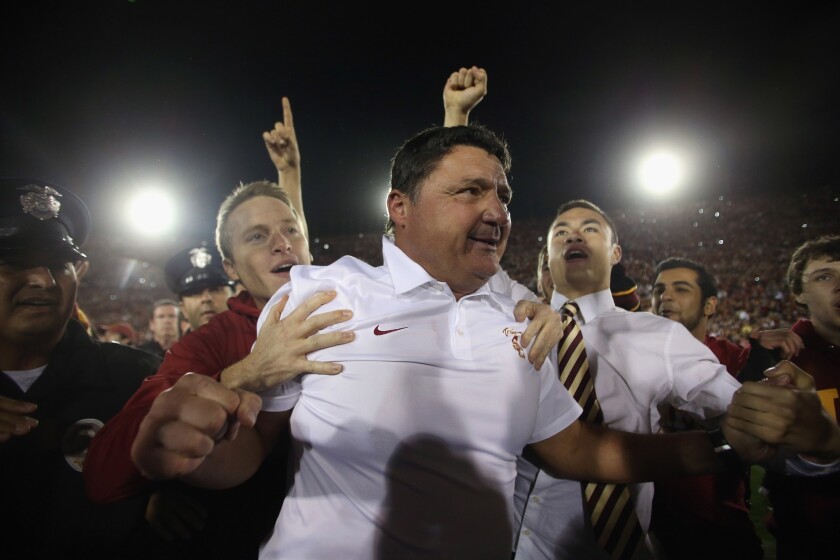 Brian Kennedy was once a big USC booster, but not anymore

Twenty years ago, when USC needed to add a second football practice field, the school knew who to call. Brian Kennedy, who had been attending Trojans football games since 1949, had made a career out of building things quickly.

Kennedy’s company, West Hollywood-based Regency Outdoor Advertising, hangs gigantic billboards all over town, from the Sunset Strip to Los Angeles International Airport. He got the practice field done in about four months, and Kennedy felt truly appreciated in 1999 when one of USC’s assistant coaches, Ed Orgeron, stopped by to introduce himself and say thank you.

“I’ll make it up to you,” Orgeron told Kennedy.

What Orgeron meant, to Kennedy, was that the USC defensive line coach was going to work hard to awaken the booster’s beloved football program from the dormancy of the 1990s.

Kennedy is proud of Orgeron, happy for him, but he can’t shake the feeling that it should have been USC being coached by the fiery Cajun on the sport’s grandest stage.

“We could have had Ed,” Kennedy said. “He would have been absolutely the best. He was the one who brought in all the players for the last 20 years.”

Saturday morning in New Orleans, when Kennedy attended the reception for Orgeron winning the Eddie Robinson Award for coach of the year, Kennedy was fuming about the state of the Trojans the last few years, but the businessman who helps others relay their messages and slogans to the world had elected to stay silent.

That morning, however, he finally let his frustration out publicly, creating a stir on social media by referring to the USC football program as “dog ....”

Given two days to reflect on the comments, Kennedy said, “It was not appropriate. But believe me, everybody I talk to has come up and said the same thing, not in so many words, that this is the worst they’ve ever seen USC.

“In a way it was a slip, but you know what, I knew I had to [say something] once and for all, if USC was going to become relevant. I don’t think it can be now, not with the administration that we have. I used to be a season-ticket holder for something like 50 years, and guess what. I haven’t been to a game in three years. They pretty well ran me off.”

Kennedy, whose name adorns the practice field he donated and built, said that former USC athletic director Pat Haden promised him to heavily consider Orgeron to replace Lane Kiffin if Kiffin were fired. When that happened during the 2013 season, Orgeron was appointed interim coach, leading USC to a 6-2 record. But the losses were to Notre Dame and UCLA.

Kennedy does not believe that serious consideration was given to Orgeron, as Steve Sarkisian was hired away from Washington instead.

Kennedy’s relationship with the athletic department began to deteriorate from there. He said he advised Haden to hire Orgeron after Sarkisian was fired in 2015, too, but was ignored.

Haden did not respond to a request for comment through a USC spokesman.

When Lynn Swann took over for Haden, Kennedy felt completely phased out. He said he has not heard from Mike Bohn, who replaced Swann.

Monday, Kennedy felt fortunate that Orgeron would think to bring him along for his magical ride with LSU, which is 14-0 and has six victories over top-10 teams.

Kennedy even got to board the team bus to the Superdome.

“If they would have treated him better, we could have had Ed Orgeron as our head coach for life,” Kennedy said. “It’s sad it didn’t work out that way.”

USC booster Brian Kennedy is happy for LSU coach Ed Orgeron, but he can’t shake the feeling in his gut that this should be USC being coached by the fiery Cajun on the sport’s grandest stage.