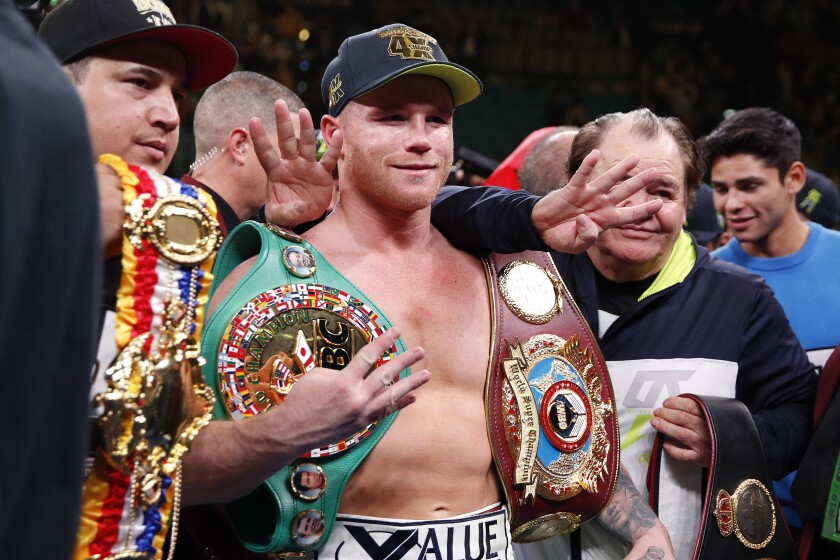 It was one for the books. Not the history book. History will have to wait. But Canelo Alvarez won one more title for another milestone in a record that one day might allow him to say he belongs among the best ever.

Alvarez did it emphatically, winning the World Boxing Organization’s light-heavyweight title with a combination that stopped Sergey Kovalev at 2 minutes 15 seconds of the 11th round on Saturday night at the MGM Grand Garden Arena.

First, it was a right to the body. Then a pair of blows to the head, left then right, drove Kovalev into the ropes. The Russian dropped to the canvas, looking almost lifeless. He eventually had to be helped to his feet and onto a stool.

“I just ask you to be patient,” Alvarez, whose purse was $35 million, said to a cheering crowd. “I am making history.”

History is built on what Alvarez (53-1-2, 36 KOs) achieved. In moving up two divisions from middleweight, he won a at a fourth weight class.

But true to his long-term patience, he was patient in the fight, too. The bout started slowly, both fighters looking tentative. Kovalev (34-4-1, 29 KOs) relied early on his feared jab. He tried to measure, then maintain distance. But Alvarez began to move forward late in the round, landing two left hooks, one to the head followed by one to the body.

In the second round, Kovalev began to look like the bigger man. Alvarez lunged and missed. Kovalev peppered combos at his upraised hands, which shielded him with careful vigilance.

By the third, it was clear both fighters were looking for angles and openings from different perspectives. Kovalev landed a left from a distance and Alvarez tried to get up-and-under the taller Russian. In the fourth, Alvarez began to zero in with a left hand. It began to find its mark just as Kovalev threw his long jab. Alvarez landed one, then two, in a succession of blows punctuated by a right uppercut to the body.

In the fifth, there was a different Alvarez, a defensive version. Kovalev threw punches yet missed as Alvarez moved his head from side to side in a defensive pose, a subtle adjustment that seemed to surprise Kovalev.

In the sixth, the bounce in Kovalev’s footwork was missing. He backpedaled as Alvarez pursued, sensing perhaps that the Russian was fatigued. Late in the seventh and early in the eighth, Kovalev appeared re-energized. He moved forward, pursuing Alvarez, leading with a deadly jab that repeatedly backed Alvarez into the ropes. It was as if the Russian knew the fight had reached a crucial point.

It was still up for grabs until Alvarez ended it. Kovalev collected a career-high $12 million.

For weeks, ticket sales were slow. Hours before opening bell, prices were slashed, some by as much as 50%. Seats in the upper rows of the arena had an initial price tag of $400. They were cheap in name only. They were selling for $200 a couple hours before the main event, which was delayed as promoters awaited the end of a UFC event in New York.

During Victorville lightweight Ryan Garcia’s first-round KO of Romero Duno in the last fight before the main event, the crowd began to grow. Empty seats slowly filled. But it wasn’t clear how many tickets were bought and how many were comped.

In a fight stopped in the 10th round because of a bloody head butt, Senieisa Estrada (18-0, 7 KOs) of Los Angeles won by TKO against Houston’s Marlen Esparza (7-0, 1 KO).