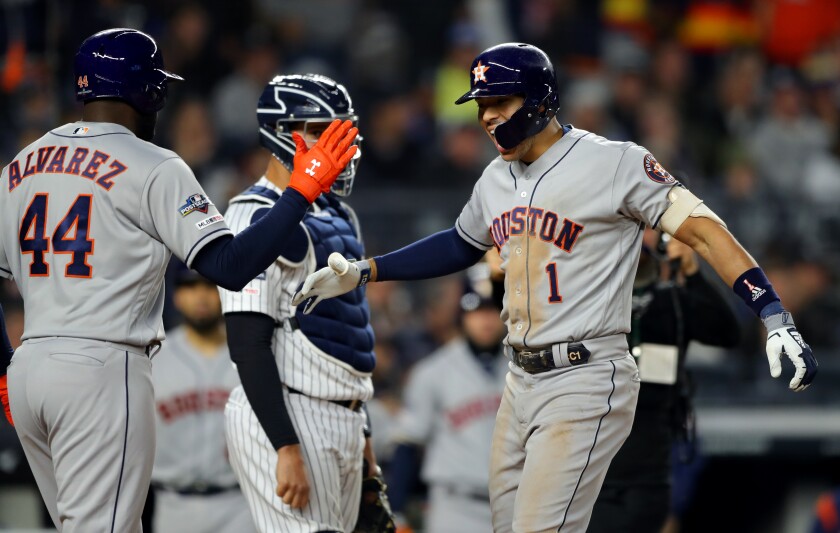 Carlos Correa’s blast sinks Yankees, who fumble away any comeback in ALCS Game 4

Carlos Correa rounded the bases, his right hand raised and a wide smile on his face, as a hush fell over the home crowd, except for the stray expletive.

Correa had just ripped a fastball into the left-center field seats Thursday, and an air of inevitability was falling over Yankee Stadium. For the second time in a week, Correa had hit a clutch home run against in this ALCS. The first had broken the Yankees’ hearts and won Game 2, and this one had all but sealed Game 4.

Correa’s three-run shot gave the Astros a five-run lead, and they rode that momentum to an 8-3 win, to take a commanding 3-1 lead in the series. For the Yankees, they now face a nearly insurmountable challenge: beat Justin Verlander in Game 5 and Gerrit Cole in Game 6, two of the best pitchers in baseball, just to keep their season alive. Their chance of staying in the series might have evaporated as soon as the ball left Correa’s bat.

For all his talent, Correa has been hampered by injuries throughout his young career. He’s missed at least 50 games in each of the last three seasons. In 2017, he tore a thumb ligament. In 2018, he had back pain. This season, he missed more than half the season with back and rib injuries. He told reporters he suffered the rib injury during a massage at his home.

As a result, Correa played in just three games in September. As the playoffs began, he seemed to be still searching for his swing. In the ALDS, in five games against Tampa Bay, he batted .158 and had nine strikeouts. In Game 1 of the ALCS, he went 0 for 3 and added another strikeout. Nevertheless, Correa felt as if he were making strides, regaining his timing.

Before Game 2, he said he had an “amazing” batting practice session. He reportedly told a few teammates he felt he’d have a big game. He ended up hitting a walk-off home run in the 11th inning. Running to first base, Correa cupped his hand to his ear, ala Hulk Hogan, basking in the roar of the Minute Maid Park crowd. As he approached home, he stopped and shot his helmet, like a basketball player taking a jumper, into the mob of teammates crowding the plate.

“Moments like this like tonight make everything worth it,” he said afterward. “Nights of hard work, doing my rehab, not missing anything, it’s all worth it when you look at moments like this.”

Just as soon as his swing had returned, it was gone in Game 3. Correa went 0 for 4 and had two more strikeouts. Fortunately for the Astros, Cole did not need much run support.

Early in Game 4, having Zack Greinke on the mound, it became apparent Houston would need to score more. In the first inning alone, Greinke walked three batters, allowed a bloop single, and handed the Yankees a 1-0 lead. He settled down for the next few innings before exiting in the fifth, after allowing two baserunners and igniting a Yankees rally.

Greinke watched from the dugout as Ryan Pressly, the reliever who replaced him, struck out Gleyber Torres and Edwin Encarnacion to end the threat. After Encarnacion swung through a 95 mph fastball, Pressly let out a primal scream.

At the time, Houston led 3-1, thanks to a three-run home run from George Springer, another slumping Astro. But the fifth inning drama had given the Astros some urgency.

In the top of the sixth, Alex Bregman started the rally hitting a sharp ball at the Yankees first baseman DJ LeMahieu, who fumbled it for an error. Two batters later, Yordan Alvarez, the former Dodgers prospect, singled to center. Next, Correa came to bat. On the second pitch, he pulled a 96 mph fastball off Chad Green to left center.

After that, the Yankees essentially imploded. In the eighth, they made two more errors, which allowed Houston to tack on another run. They’d finish the game with more errors (four) than runs scored. CC Sabathia also left mid-inning with a left shoulder injury, in what might’ve been his last appearance of his career, as if the mood weren’t somber enough.

“It was tough to see,” said Aaron Judge, the Yankees’ right fielder said of Sabathia. “That’s our leader. He left it all out there.”

By the ninth inning, most fans had left the stadium. Down the third-base line, two groups of orange-clad fans started “Let’s go Astros!” chants.

“You’ve got to have a short memory here in baseball,” Judge said. “Especially after a game like that.”