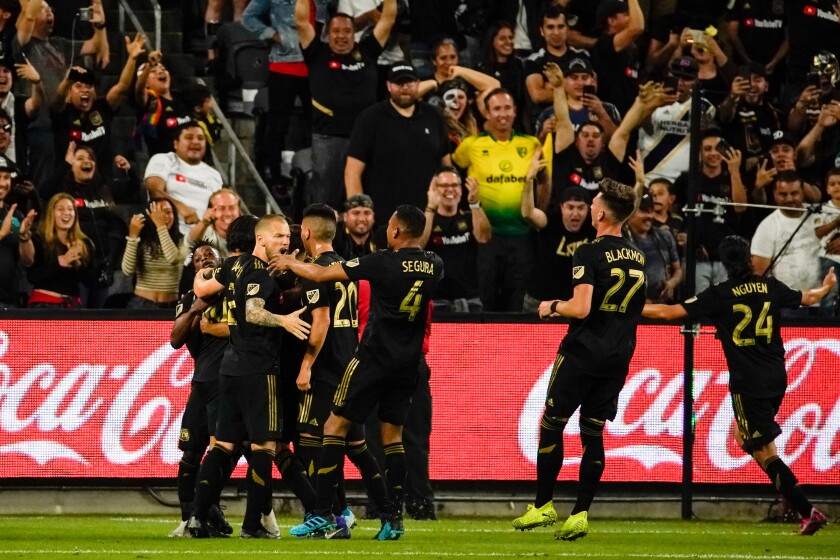 It was a heavyweight title fight without a ring, a slugfest that left both sides exhausted and spent. And those were just the fans.

In two short years the crosstown rivalry between the Galaxy and LAFC has become the best in U.S. soccer — and arguably the most passionate in Southern California in any sport. And Thursday’s first Major League Soccer playoff game between the teams didn’t disappoint.

If anything it took the emotion up a notch, with the teams combining for five second-half goals in a wild Western Conference semifinal that LAFC survived 5-3.

The win was LAFC’s first in six games against its neighbor and it sends it on to Tuesday’s conference final against the Seattle Sounders. The Galaxy, meanwhile, go back to Carson, their first visit to the postseason in three years over after two games.

“We all knew that it was our time. It had to be the Galaxy,” said LAFC coach Bob Bradley, who saw Carlos Vela, the team’s MVP candidate, score twice in the first half and Adama Diomande, playing his first game in a month, come off the bench to score twice in the final 31 minutes.

“Today was a big night for us,” Vela said of the team, which is a win shy of playing in the MLS Cup in its second season. “I want to win the MLS. We [took] one step. We want more.”

The Galaxy got a goal and an assist from captain Zlatan Ibrahimovic, who may have played his last game in MLS. Ibrahimovic’s contract expires at the end of the year and, at 38, he has hinted he might be headed back to Europe.

“The whole season was like this,” said Ibrahimovic, who had a late goal taken away by a Galaxy foul. “We scored a couple of goals but we conceded many more. That’s not how you win. That’s not the way you become champion. I think we should be disappointed.”

Will he be coming back?

“We’ll see what happens,” he said.

“We put on a pretty good show,” offered Galaxy coach Guillermo Barrios Schelotto, who led the team to 16 regular-season wins, its most in five seasons. “It was a wonderful game. I feel sorry for us because we lost.

LAFC, which had gone a season-long 17 days without a game thanks to its first-round playoff bye, looked shaky in the early going, ceding possession and playing for a counterattack. That almost led to a fluke early goal for the Galaxy when Cristian Pavon’s shot from distance caromed off midfielder Eduard Atuesta and struck the right goal post.

But Vela brought the team out of its malaise in the 16th minute, beating Galaxy keeper David Bingham with a right-footed shot from the center of the box.

Vela has scored in all six games against the Galaxy, with five of his nine goals either pulling his team even or giving it a lead.

He doubled the lead in the 40th minute, racing into the center of the box unmarked to tap in a Brian Rodriguez feed, a goal many in the crowd of more than 22,500 greeted with chants of “M-V-P! M-V-P!”

That appeared premature when Pavon got the Galaxy on the scoreboard less than a minute later. Then 10 minutes into the second half Ibrahimovic tied it, collecting a poor clearance from LAFC defender Tristan Blackmon and squeezing a shot between keeper Tyler Miller and the near post.

It was Ibrahimovic’s ninth goal in the cross-town rivalry and it set the stage for a wild series of counterpunches.

Diego Rossi put LAFC back in front in the 66th minute, taking a pass from Vela and pushing a left-footed shot by Bingham’s outstretched leg from the right wing. Two minutes later he ran the same play, only this time he crossed the ball toward the far post for Diomande, who headed it in.

“To see our guys respond at that point, that’s something special,” Bradley said.

The Galaxy’s Rolf Feltscher briefly made a game of it again with a driving header of his own in the 77th minute, but Diomande pulled that back three minutes later at the end of a solo run into the box.

That capped an emotional comeback for Diomande, who spent the last month in the league’s Substance Abuse and Behavioral Health Program with what has been described as a personal issue.

“For me to see him come back into the team and have a night like tonight, I’m proud of him,” Bradley said. “He’s handled things really well.”