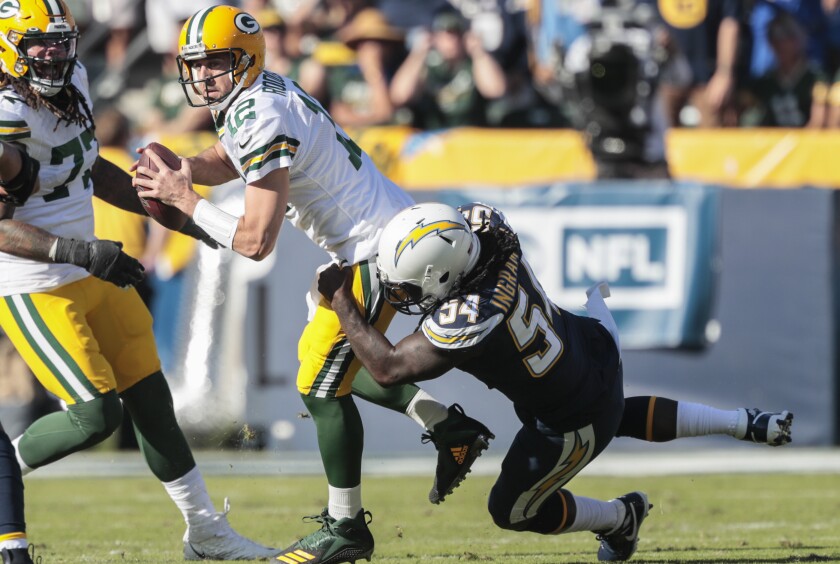 It did not take long for Chargers edge rushers Joey Bosa and Melvin Ingram to acquaint themselves with Green Bay Packers quarterback Aaron Rodgers on Sunday.

Bosa, a fourth-year pro who had never played against Rodgers, had a little meet-and-greet on Green Bay’s third play, when Bosa blew by left tackle David Bakhtiari with an inside move and sacked Rodgers for a nine-yard loss on third down to force a punt.

Ingram, an eight-year pro who had played one game against Rodgers, in 2015, burrowed past right guard Billy Turner and dropped the quarterback for a seven-yard loss on Green Bay’s second possession, the sack on third and 10 forcing a punt early in the second quarter.

“Those sacks really set the tone, because I’m sure their offensive coordinator had to change the way he goes about the game,” nose tackle Damion Square said after the Chargers’ stunning 26-11 victory over a Packers team that had won seven of its first eight games.

“He probably wanted to come out and sling the ball around based on the amount of sacks they’ve given up, the success they’ve had and who he has at quarterback. But for Joey to come out and get a sack on the first series, and Melvin on the second … they had to change things up and go to something else.”

Whatever the Packers went to, it didn’t work. The Chargers defense matched a superb game by the offense with its best performance this season, keeping Rodgers and the Packers out of the end zone for more than 3½ quarters.

The Chargers, relying almost exclusively on a four-man rush and a mix of zone and man-to-man coverage, harassed Rodgers into his worst game this season, with three sacks for a loss of 22 yards and two quarterback hits. The Packers had given up 17 sacks in their first eight games.

Rodgers completed 23 of 35 passes for a season-low 161 yards and one touchdown. He had 61 yards passing through three quarters, his lowest in a game in which he has played all three periods.

“That’s crazy — you never see that,” cornerback Casey Hayward, a former Green Bay defender, said of Rodgers’ three-quarter output. “As a whole, I feel like we did a good job at the back end. Our guys up front did a great job.

“Melvin and Joey caused havoc all game. Then Square and all those guys up front did a great job in the run game. Any time you can slow those guys down in the run, we kind of know what’s going to happen. They’ve got to pass the ball.”

Green Bay running back Aaron Jones, who caught a team-high 34 passes for 355 yards and three touchdowns and rushed for a team-high 466 yards and eight scores in the first eight games, netted 30 yards rushing in eight carries and caught one pass for a loss of one yard.

Big-play receiver Davante Adams caught seven passes but for only 41 yards. The Packers converted two of 10 third-down plays and had 13 first downs. Green Bay had 50 yards in the first half, the first time since 2011 the Chargers gave up 50 or fewer in a first half.

“Gus [Bradley] did a good job of mixing it up with zone and man coverage, just disguising some of our zone coverages,” coach Anthony Lynn said of the team’s defensive coordinator. “And the pass rush was excellent.”

The offense deserves some credit, Square said. The Chargers held possession for 18 minutes 24 seconds of the first half. The Packers had the ball for 11:36.

The Chargers opened the game with two long field-goal drives; the Packers went three and out on their first possession and gained one first down on their second.

Green Bay went three and out on its first possession of the second half, with fill-in strong safety Jaylen Watkins providing blanket coverage on a long third-down pass intended for Jake Kumerow.

Bosa and Ingram combined for a six-yard sack of Rodgers on the Packers’ second possession of the second half, and Drue Tranquill’s block of a punt deep in Packers territory set up a Melvin Gordon one-yard touchdown run that gave the Chargers a 19-0 lead with 3:56 left in the third quarter. Bosa has 5½ sacks over the last three games.

“For the offense to come out there and drag them down the field and eat up the clock — we haven’t been getting that week to week,” Square said. “It put a spark in us. It gives your defense life, and it turns your pass rushers into hunters. You saw that. Joey came alive, Melvin came alive, and it made for a long day for A-Rod.”

An effective pass rush was complemented by tight coverage in the secondary. On consecutive plays late in the third quarter, slot cornerback Desmond King dropped Adams for a three-yard loss after a short completion and broke up a pass intended for Kumerow to force a punt.

And Watkins, who replaced the injured Roderic Teamer, was all over the field, providing strong coverage and making four tackles, one on which he hit Geronimo Allison so hard that Watkins had to leave the game briefly in the fourth quarter.

“Oh man, he played lights out,” Hayward said of Watkins. “He brought the energy from the first play of the game, and I think he sparked the defense.”