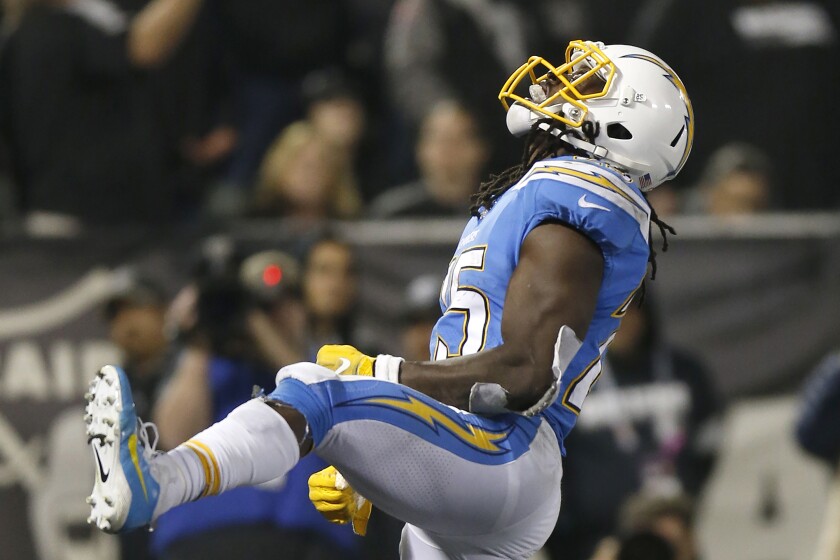 The yards are starting to accumulate for Melvin Gordon after a sluggish four-game start, the Chargers running back following a 20-carry, 80-yard, two-touchdown game against Green Bay last Sunday with a 22-carry, 108-yard, one-score game against the Oakland Raiders on Thursday night.

But so are the losses.

Despite Gordon’s efforts, the Chargers dropped a 26-24 game in the Oakland Coliseum to fall to 4-6 on the season, and their playoff hopes are looking much like Gordon did in his first four games following his holdout: stuck in the mud.

“You can never be happy with a loss, especially now knowing you’re in the worst position in football, where every game is a do-or-die,” Gordon said. “It sucks, but we put ourselves in this position. We have no margin for error at this point. To be completely honest, we can’t afford another loss. That’s just being realistic.”

That sinking feeling is all too familiar to Gordon. He felt the same way after the Chargers opened the 2017 season — their first under coach Anthony Lynn — with four losses.

The Chargers responded to that adversity by winning seven of eight games and nine of their last 12 to finish one game out of the playoff picture.

“I can’t say it hasn’t happened before, but we can get it done,” Gordon said. “If there’s any team that can do it, it’s us.”

The road ahead — which begins with a Monday Night Football game against the defending AFC West champion Kansas City Chiefs in Mexico City on Nov. 18 — is daunting, but if the Chargers are to keep their slim playoff hopes alive they will need Gordon to continue his success.

After rushing for 112 yards on 44 carries for a 2.5-yard average in his first four games — part of an ineffective ground attack that led to the firing of offensive coordinator Ken Whisenhunt on Oct. 28 — Gordon has begun to resemble the bruising runner who carried 175 times for 885 yards and 10 touchdowns in 2018.

Gordon turned a short pass from Philip Rivers on a crossing pattern into a 25-yard gain Thursday night to jump-start a second-quarter drive that ended with his three-yard touchdown run and a 14-10 Chargers lead.

Working behind a makeshift line that included third-string center Scott Quessenberry and inexperienced tackles Trey Pipkins and Trent Scott, Gordon ripped off a 24-yard run on a late third-quarter drive that ended with Michael Badgley’s 27-yard field goal to pull the Chargers within 20-17 of the Raiders.

Gordon had two runs totaling 10 yards toward the end of a fourth-quarter drive that Rivers capped with a six-yard scoring pass to Austin Ekeler. That gave the Chargers a 24-20 lead with 4 minutes 2 seconds remaining.

“I’m getting back into a rhythm with my cuts, my feet, my timing, everything,” Gordon said. “I’m there, but I just have to keep putting good games together.”