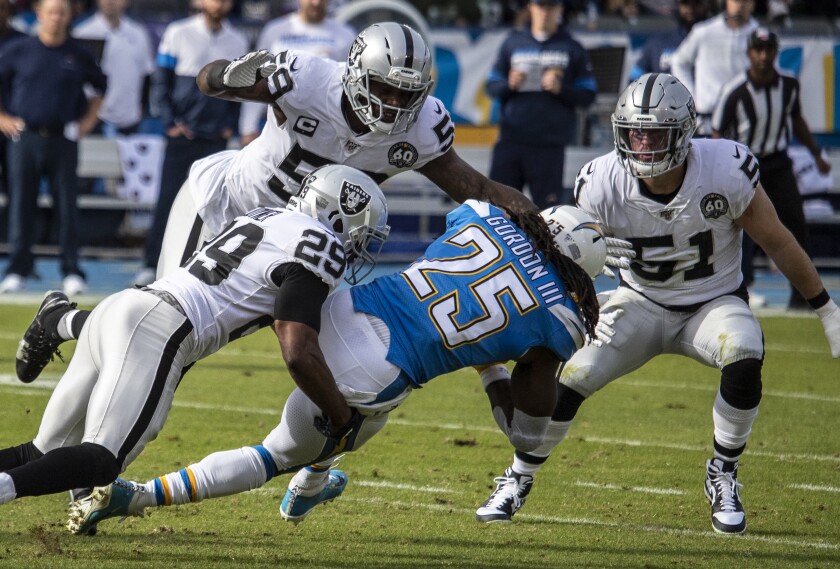 The Chargers ran the ball 16 times Sunday, and 12 of those carries gained a single yard or nothing or went in reverse.

To be fair, two of the plays were one-yard touchdown runs by Melvin Gordon and another was a quarterback kneel to end the first half.

But after totaling 146 yards rushing in Oakland in Week 10, the Chargers could generate almost nothing on the ground in a 24-17 loss to the Raiders at Dignity Health Sports Park on Sunday.

“Sometimes, they get after you,” Gordon said. “We got after them last time we played them. They wanted to make it known that, ‘You guys ain’t running the ball this week.’ So they stopped us.”

Gordon had a season-high 108 yards in 22 carries when the Chargers visited Oakland six weeks ago. He finished Sunday with 15 yards in nine attempts.

Only one of the Chargers’ 16 running plays gained more than five yards. They rushed for five yards total in the first half and then ran the ball just three times the rest of the game, all in third quarter.

“They did a good job of stepping up and running run-stunts and getting in certain defenses to stop the run,” coach Anthony Lynn said. “So we lost a lot of one-on-ones. We need to do better right there.”

The Chargers’ defense was pushed around in the running game despite the Raiders being without 1,000-yard rookie rusher Josh Jacobs, who was out because of a shoulder injury. Then, early on, Oakland also lost running back Jalen Richard after he hurt his ankle.

Still, the Raiders ran for 99 yards, led by DeAndre Washington, whose 85 yards in 23 carries helped Oakland dominate the ball for 21 minutes of the second half.

It was a rough way to conclude the home phase of their 2019 schedule, the Chargers falling to 0-5 against the AFC West on the same day they also officially reached last place in the division.

They were forced to play Sunday without starting left tackle Russell Okung, who is dealing with a groin issue.

“But we still can run the football,” Lynn said. “We got away from the running game in the second half because we got down by two scores. The way the time of possession was going, we had to open the offense up and throw it to just get down the field.”

The game began with a false start by Gordon on the first play from scrimmage. Okung’s replacement, rookie Trey Pipkins, was called for illegal use of hands on the next snap, the miscues pushing the Chargers 15 yards backward.

Gordon later said the offense lacked passion at the start, noting that the Chargers’ first five possessions resulted in punts.

“It wasn’t a lack of passion,” Lynn said Monday. “It was a lack of execution. I’d tell Melvin the same thing.”

One of the Chargers’ negative running plays was another failed attempt to trick the opposition by inserting backup quarterback Tyrod Taylor and splitting Philip Rivers out wide.

The Chargers have attempted a few variations of that alignment this season with no success. Against the Raiders, Taylor lost a yard on third and one in the second quarter.

“Those plays are like hit or miss,” Lynn said. “You don’t know exactly what you’re going to get when that quarterback goes into the game.”

Oakland proved that point, Lynn explained, by doing something that surprised the Chargers. The Raiders called a blitz-zero, leaving one-on-one coverage with no safety help.

“[That was] something that we weren’t prepared for, and they stopped the play,” Lynn said. “They made a great call at the right time.”

Along with his illegal-use-of-hands penalty, Pipkins also permitted a sack by defensive end Clelin Ferrell in the fourth quarter. Ferrell beat the rookie despite Pipkins holding him and drawing a penalty flag for it.

Lynn admitted that Pipkins, a third-round pick, started the game slowly but said his play improved as the afternoon progressed.

Pipkins ended up splitting time at left tackle with Trent Scott, a former undrafted free agent in his second season. Depending on Okung’s health this week, the Chargers could use both young tackles similarly Sunday at Kansas City.

Lynn praised the play of rookie defensive tackle Jerry Tillery, who combined with Melvin Ingram on a first-quarter sack of Derek Carr. Tillery was a first-round draft selection in April.

“I thought Jerry played his best game,” Lynn said. “He played hard. He penetrated and made some plays in the backfield.”

The season has been a struggle for Tillery, who has had a difficult time combating double teams, a key assignment for an interior defensive lineman. His development also was slowed in the offseason because of shoulder surgery.

“His motor has been fine all year,” Lynn said. “It’s just learning what we’re doing and defeating double teams or just holding your ground on double teams a little better.”

The 5-10 Chargers conclude their season Sunday against the Chiefs. Kansas City has secured the AFC West title but is still playing for a better seed. The Chiefs could be seeded second, third or fourth.