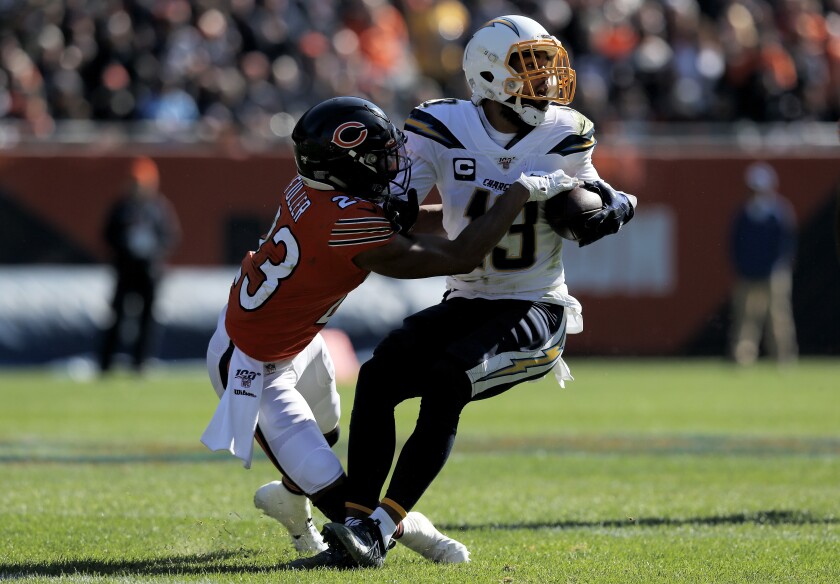 Chargers couldn’t catch or run the ball, but escaped Chicago with a win anyway

Had the final field-goal attempt by Chicago’s Eddy Pineiro not fluttered wide, two plays would have received a lot more attention afterward.

Both were near-touchdown passes that instead sailed through the hands of the Chargers. First, it was Mike Williams and later Keenan Allen.

In the third quarter, on first and 10 from the Chicago 37-yard line, Philip Rivers threw deep to Williams, who had a step on safety Eddie Jackson.

Williams later explained that he attempted to deke Jackson by “late handing” the ball, meaning he waited until the last moment before reaching out to make the catch.

Jackson managed to close the gap and didn’t buy the fake, getting his hand on the ball.

“Looking back,” Williams said, “I probably should have high-pointed it, like the one I caught in the second quarter.”

The Chargers ended up getting points on the drive, Chase McLaughlin hitting a 20-yard field goal.

In the fourth quarter, on third and 14 from the Chicago 24, Rivers fired into the end zone for Allen. The ball passed through the hands of Bears cornerback Prince Amukamara before Allen couldn’t secure it.

McLaughlin missed a 42-yard field goal on the next play. The lost opportunities were symbolic on a day when the Chargers again struggled to score.

Rivers finished 19 for 29 for 201 yards. He had one touchdown pass and one interception. Allen had a team-high seven catches for 53 yards playing with a hamstring injury that had him listed as questionable for the game. He decided to play after feeling better in warmups.

“It came up on me in the fourth quarter,” Allen said, “but I was able to push through it.”

He did have an eventful day. Allen fell running a route early in the game and later went down again on a route after contact with defensive back Buster Skrine. Both passes fell incomplete.

Allen said the latter play was “a P.I. [pass interference] that they missed.” And that wasn’t all he said.

“It’s really out of control, how many times I get P.I.’d,” Allen continued. “It’s ridiculous. No, seriously.”

He was particularly miffed about the second play. Allen said the official explained to him that there was no contact.

“He told me the guy was nowhere within five yards [of] me as I was going to the ground,” Allen said. “That’s what he told us on the sidelines. It’s just a blatant lie. It’s blatant. Like, you’re lying to us. It’s ridiculous.”

The Chargers had another day with little production from the running game.

Limited to 42 plays, compared to 77 for Chicago, they finished with 36 yards on 12 carries — the fourth consecutive game in which the Chargers failed to rush for as many as 40 yards, something that has happened only three times in NFL history and not since 1946.

Melvin Gordon finished with 31 yards on eight carries and is averaging 2.5 yards this season. Austin Ekeler had three yards on three attempts. He’s averaging 1.9 yards in the last four games after averaging 3.9 in the first four.

The Chargers were leading 17-16 when they took over for their final possession with 2:04 remaining.

They had the ball at their 15-yard line and, rather than staying conservative and running the ball, Rivers dropped back to pass and was sacked by Khalil Mack for a six-yard loss.

Coach Anthony Lynn explained that with the clock stopping for the two-minute warning anyway, the Chargers decided to be more aggressive.

Rivers said he probably should have thrown the ball away but acknowledged he was focused more on ball security.

“Everything’s wide open,” Rivers said of the potential play calls in that situation. “We kind of tried [to] finish them, which I’m all for.”

The Chargers and Bears have little history against one another, the game Sunday only the 13th between the franchises.

The Chargers never had won in Soldier Field and only once in the city of Chicago, in a 1970 game at Wrigley Field.

One of the Chargers, however, has plenty of experience against the Bears. Cornerback Casey Hayward spent his first four seasons with Green Bay, an NFC North rival of Chicago.

“I know how it is in this environment,” he said. “It’s a crazy environment. This division is wild.”

Afterward, Hayward was so fired up that he admitted he wasn’t sure what Lynn’s message was following the game.