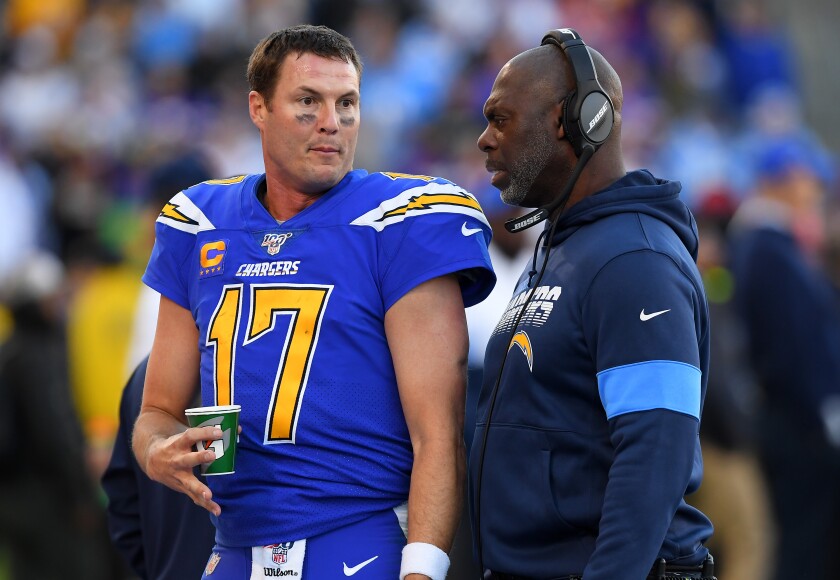 Even if you don’t believe that Philip Rivers is the quarterback who’s going to lead the Chargers back to competitive relevance, trust that he knows this team. So it carries weight when Rivers indicates the problems with the franchise aren’t a quick fix away.

“It’s not just a matter of, if I’m back and if I play well, we’ll go win 12 games,” said Rivers, who’s contract is set to expire in March. “We’re far from being just check that box and everything will be good. `If we don’t turn it over, we’re good.’ I think that would be inaccurate.

A year removed from advancing to the divisional playoffs, the Chargers were 5-11, the third time in five years they won five games or fewer.

How to move forward at quarterback is the most glaring issue on the field, but the franchise is facing a more global challenge of generating interest in Los Angeles as the team transitions from an intimate yet hard-to-fill soccer stadium to a futuristic venue three times the size.

With that in mind, here are some suggestions for moving forward:

Keep him for one more season, and use the No. 6 pick on a quarterback — Alabama’s Tua Tagovailoa, if he’s there — and let the rookie learn at the elbow of a guy who has assembled Hall of Fame credentials.

The football world has gone from analog to digital overnight, and immobile, drop-back quarterbacks are the NFL’s answer to AOL on a dial-up modem. Regardless, Rivers is a stabilizing leader in the locker room and someone who still can win games. This was a forgettable year for him — 11 fewer touchdowns and eight more interceptions than last season — but he has pulled out of statistical nosedives before.

“I think it’s become cliché,” Rivers said. “If you’re 38, and you throw a bunch of interceptions, that’s what they’re going to say: `Can’t throw anymore. Can’t throw the out. Can’t throw this. Arm strength.’ I almost laugh at it, because I want to go, `Let’s sit down and watch 16 games together. We can see every play you want.’ I’ll tell you the ones where, '`Yeah, that was horrible. That was a terrible throw.’ But then I’ll say, `'Now, what are you going to say about this throw?’ There’s really no chip [on my shoulder]. The people who know, know. I can still play at a high level.”

Forget Tom Brady or Cam Newton. Those rumors have been floating around for months, people trying to connect the dots with a high-wattage quarterback on one side, and on the other a team desperate to put fans in seats. Brady will be 43 next season. Newton has a Lisfranc foot injury, and it’s unclear whether he’ll ever return to form.

There’s a decent chance Brady plays with a team other than the New England Patriots next season. But why would he want to come to the Chargers? If he goes somewhere else, he’s going to go where he can win another ring, and soon. Does he want to try to rescue a team that in essence plays 16 road games, given the lack of home support for the Chargers.

The Chargers have a $650-million relocation fee to pay over the next 10 years, and they haven’t been raking in the revenue in comparison to other clubs. Are they ready to push all their chips to the middle of the table for an aging player who may or may not make a difference?

The Chargers lack quick-strike capability that a turf-melting wideout brings. Keenan Allen has All-Pro hands as a possession receiver, and Mike Williams makes some plays as a glorified tight end, but this team needs someone who can stretch the field like taffy. Running back Austin Ekeler has made some long plays, but doesn’t have that speed that leaves scouts rubbing their eyes and re-checking their stopwatches.

There’s a plodding feel to the Chargers. According to footballoutsiders.com, they were second to Baltimore in average drive time. But while the Ravens cashed in on those long drives and were No. 1 in points per possession, the Chargers were 14th.

“Some of those long touchdown drives, I don’t think anybody can fully appreciate what a grind it is to get down there and score,” Rivers said after the Kansas City finale.

The Chiefs have the raw speed to make it look easy. For example, in the third quarter, the Chargers took a 14-10 lead on a five-yard touchdown run by Melvin Gordon. Kansas City gave the visitors precisely 16 seconds to bask in the warmth of that. Mecole Hardman grabbed the momentum right back with a 104-yard kick return for a touchdown.

After they draft a quarterback, the Chargers should grab whichever Alabama receiver is left on the board. Jerry Jeudy is the better route runner, but DeVonta Smith and Henry Ruggs III have that melt-your-facemask speed.

Another intriguing talent is Kentucky wideout Lynn Bowden, who ran for 233 and 284 yards in his last two games. Somebody could build a package for him similar to the one New Orleans has for Swiss Army knife everything-back Taysom Hill.

The Chargers need to get aggressive in the free-agency market to continue building their offensive line. They cannot let another Laremy Tunsil pass them by, especially with left tackle Russell Okung banged up and nearing the end of his career. The franchise needs to open the wallet wide and make some big investments there.

The Chargers don’t have a great track record for drafting offensive linemen, and those big men are getting harder to find in the college ranks because of changing offenses. It might be best to shop for proven veterans who can protect the quarterback and push open holes for runners.

Those aren’t the sexy, splashy moves that are going to sell tickets right away. But in terms of generating interest, sustained winning is the best hope.