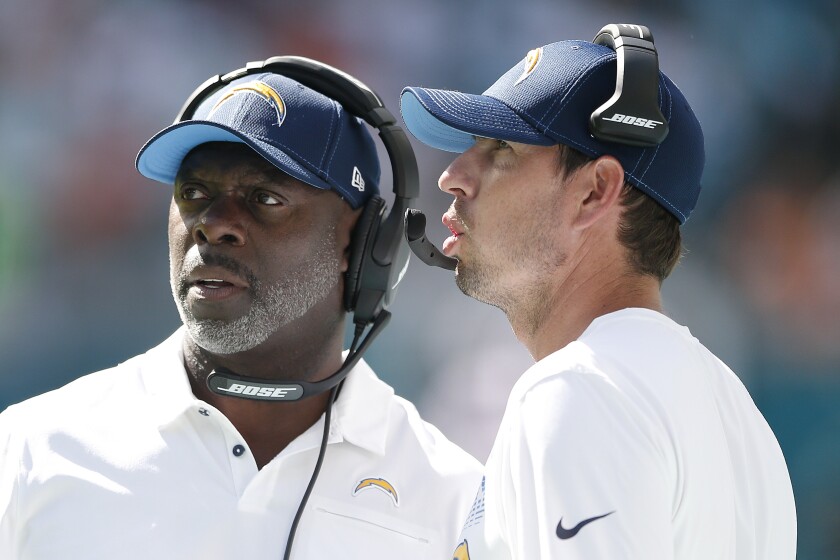 After a 5-11 finish, changes are anticipated on the Chargers coaching staff.

One of those changes, however, apparently won’t come at offensive coordinator.

The team is expected to retain Shane Steichen as its play caller in 2020, a source familiar with the situation confirmed. Steichen, 34, took over as offensive coordinator in October after Ken Whisenhunt was fired.

“I thought, all in all, he did an excellent job,” general manager Tom Telesco said last week during his season-ending session with the media. “I think he has a really bright future in this league. He made some tweaks and some changes, but it’s hard.

“If you’re not the coordinator in training camp or even in the offseason program where you’re installing what you want to do, you can’t make major changes during the season. I thought he did a really good job. I thought he handled it well.”

The Chargers also ran the ball better after Steichen was promoted, with offensive line coach Pat Meyer coordinating that aspect of the offense.

Steichen has been with the Chargers since 2014, when he was hired as a quality control coach. He spent the past four seasons as the team’s quarterbacks coach.

Two years ago, Steichen was rumored to be leaving the Chargers to become Indianapolis’ offensive coordinator. Instead, that job went to a different Chargers assistant, Nick Sirianni.

Last week, coach Anthony Lynn said it was unlikely that Steichen would continue to serve as quarterbacks coach in 2020 if he were retained as offensive coordinator.