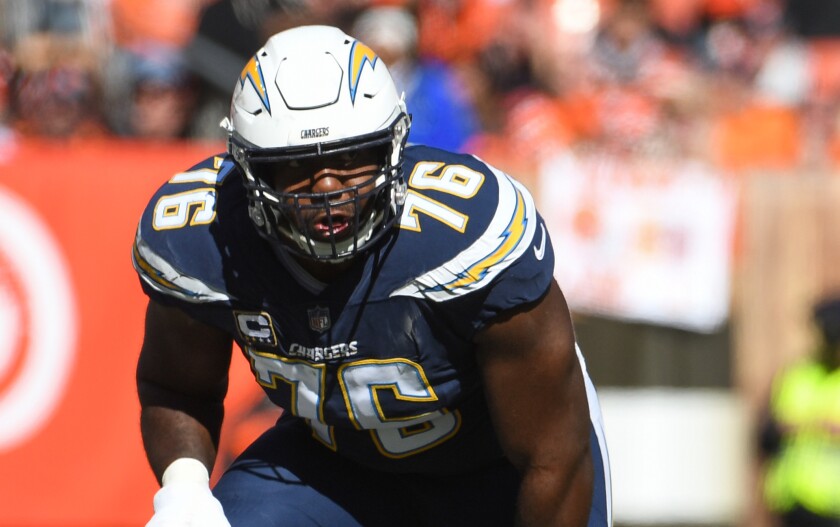 Chargers coach Anthony Lynn indicated Monday that left tackle Russell Okung is undergoing testing and said the team should know more about his status when the players resume practice Wednesday.

After missing the required first six weeks of the regular season, Okung is now eligible to return from the non-football illness list.

Okung has been out since he suffered a pulmonary embolism June 1. His treatment has included blood thinners, which make playing football impossible. The Chargers remain unsure if Okung will be able to return this season.

Trent Scott has filled in at left tackle on an offensive line that is also missing veteran center Mike Pouncey, who had season-ending neck surgery last week.

The Chargers struggled badly on offense the past two games, particularly running the ball. They gained only 67 yards on 30 attempts.

“Anytime you rush for 35 yards or whatever we rushed for, that speaks for itself,” Lynn said Monday.

Lynn said the changes up front “could have slowed” the running game, but he expressed confidence in the group.

“We have a good, young offensive line and those guys will be fine,” he said. “I’m not worried about those guys…I believe in those young men.”

Rivers was sacked only once and the Steelers were credited with hitting him six times total. But he frequently was rushed, especially early in the game, and failed to generate much until the fourth quarter.

Lynn said Michael Badgley could kick some in practice this week. He has been out all season because of a groin injury. … The Chargers also could be close to getting defensive end Melvin Ingram back. He has missed the past two games because of a sore hamstring.