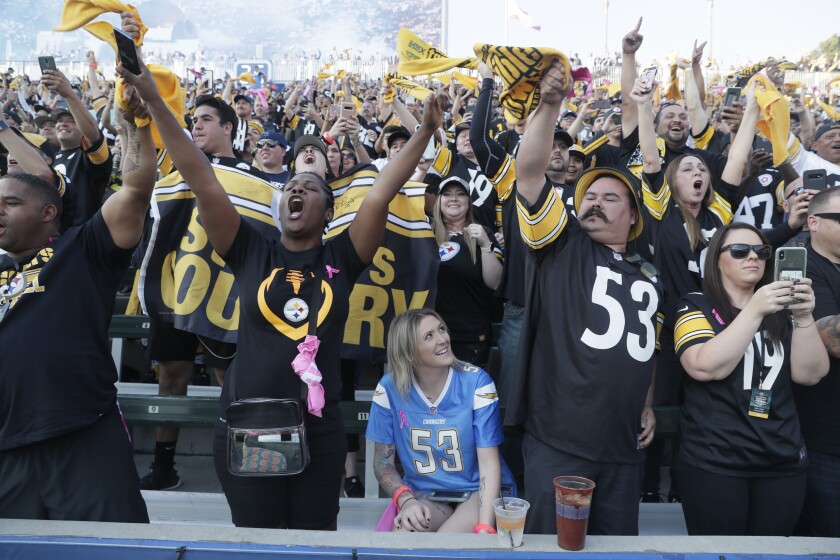 They’d already heard the chants, the cheers and the chaos, the Chargers well aware that their stadium had been overtaken by fans of the Pittsburgh Steelers.

But now, in the fourth quarter Sunday, they were hearing something over the giant speakers at Dignity Health Sports Park completely unexpected.

It was the opening of the Styx song “Renegade,” which is a regular anthem at Steelers home games.

“It was crazy,” running back Melvin Gordon said. “They started playing their theme music. I don’t know what we were doing — that little soundtrack, what they do on their home games. I don’t know why we played that.

“I don’t know what that was. Don’t do that at our own stadium … It already felt like it was their stadium … I don’t understand that.”

Said offensive lineman Forrest Lamp: “We’re used to not having any fans here. It does suck, though, when they’re playing their music in the fourth quarter. We’re the ones at home. I don’t know who’s in charge of that but they probably should be fired.”

What the Chargers also didn’t understand was that the song was being used as a setup, a setup of a joke that was then delivered when “Renegade” stopped playing and was replaced by Rick Astley’s song, “Never Gonna Give You Up.”

Such pranks, the likes of which have become popular at various stadiums, is intended to mock the visiting fans.

The problem Sunday was that the Chargers, who had just scored their first touchdown midway through the fourth quarter, still trailed at the time 24-10. It also didn’t help that Pittsburgh’s fans had dominated the noise all night.

“We were kind of expecting it from the tendencies from the past,” running back Austin Ekeler said. “There’s no hiding it. A lot of times, we have more away fans than home fans. We’ve kind of gotten used to it.

Coach Anthony Lynn agreed, downplaying the notion that the sound from the stands impacted what was happening on the field.

Instead, he talked about lacking execution on a night when the Chargers failed to run the ball, didn’t do well enough stopping the run and couldn’t prevent the Steelers from extending drives with third-down conversions.

“The crowd doesn’t play,” Lynn said. “If anything, I thought that crowd tonight brought a lot of energy to the stadium. It was an exciting night to play football. We just didn’t execute the way we should have.”

The Chargers never have experienced much of a home-field advantage since moving from San Diego before the 2017 season.

After beating Indianapolis in overtime in their opener, they’ve lost each of the last three home games.

In 2018, they were 4-3 here, with their eighth home game being played in London.

“Tonight was pretty big,” defensive back Desmond King said. “We knew what was going to happen. They travel in packs. We were prepared for that. Other than that, we’ve just got to come out here and play. There’s nothing we can do about that.”

The Chargers now have only one game at Dignity Health Sports Park until mid-December. On Nov. 18, they’ll have a “home” game against Kansas City in Mexico City.

Perhaps the crowd Sunday wasn’t a major factor in why the Chargers fell 24-17. But it certainly was another flustering element to a group of players who never expected to start the season 2-4.

“Yeah, it’s frustrating,” tight end Hunter Henry said. “It’s pretty loud in there, but we know that kind of going in. We have guys that are used to it. We’ll just keep going at it.”