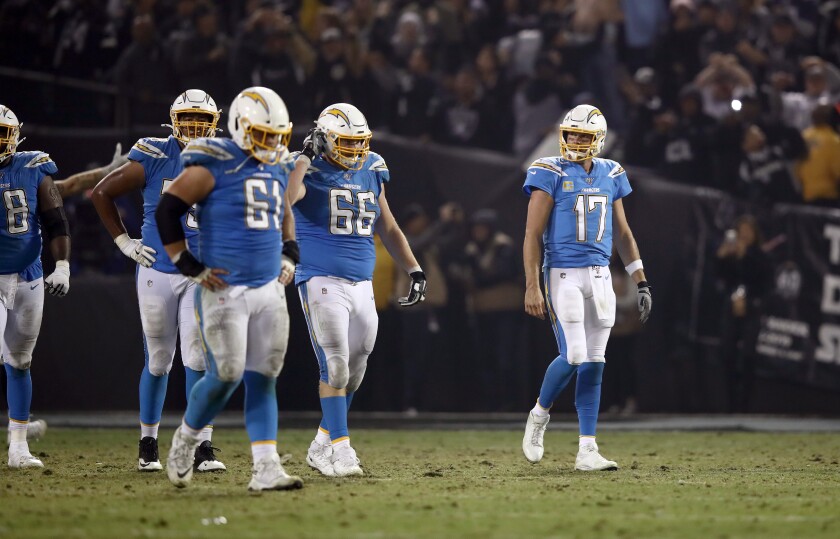 So where do the Chargers go from here?

Having dropped to 4-6 Thursday with another bitter defeat — this time 26-24 to Oakland — the Chargers will take the weekend off before traveling to Colorado Springs for five days of practice and meetings.

They’ll train at altitude in advance of their next game, on Nov. 18 against Kansas City in Mexico City.

And they’ll do so knowing they likely can’t afford another loss.

“We gotta figure out how we can pretty much go undefeated for the rest of the season,” defensive lineman Damion Square said. “That’s the only way now to get a shot to go play for the big one.”

The Chargers lost to the Raiders when Josh Jacobs scored on an 18-yard run with 1:02 remaining on the fourth-quarter clock.

On their final possession, attempting to retake the lead, they could do no better than move from their 25-yard line to their 30, and that gain came as the result of an Oakland penalty.

Having finished one game short of playing for the AFC title a year ago, the Chargers have not lost by more than one score this season. Their six defeats have come by a total of 29 points.

A victory against Oakland would have been the Chargers’ third in a row and lifted them back to .500.

They would have moved into second place in the AFC West, two games behind the Chiefs in the loss column, with Kansas City playing at Tennessee on Sunday.

Instead, they woke up Friday facing a mountain roughly the size of the ones they’ll see in Colorado in regard to making the postseason.

“We got to worry about us and then find a way to beat Kansas City,” Rivers said. “You have to go one at a time, but certainly I’m a fan of looking at the big-picture perspective.”

The big picture isn’t a rosy one after a game in which Rivers was intercepted three times and had two other pick-offs nullified by penalties.

Those were the only three turnovers of the game. Rivers also had the lone fumble of the night, with teammate Michael Schofield recovering.

“We can’t turn the ball over,” coach Anthony Lynn said. “We know that. We turned it over. They didn’t. That’s the first thing I look at.”

Rivers’ second interception came after tight end Hunter Henry slipped, though Rivers later admitted the pass likely would have been incomplete, at best.

The first turnover was the result of a bad pass intended for Keenan Allen.

“I just missed the throw to Keenan,” Rivers said. “He was wide open. It just sailed on me.”

Playing on a short week, the Chargers did appear to have sufficient energy Thursday. After falling behind by double digits early, they came back to take the lead in the second quarter. They rallied again in the fourth quarter to retake the lead.

Now, they have the benefit of a few extra days to recover before resuming their uphill climb, starting with a team still considered to be among the best in the conference.

“I think the rest will be good and get a little bit of a head start on preparation,” Rivers said. “We’ll have to play a heck of a lot better than we did tonight if we want an opportunity to beat those guys.”

And beating the Chiefs, at this point, appears to be the Chargers’ only option if they want their season to go anywhere.