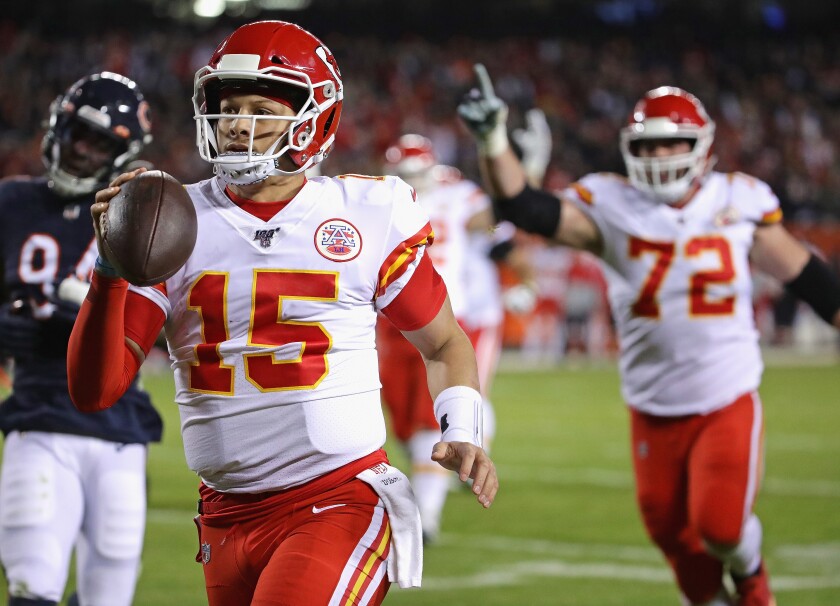 Chargers vs. Chiefs: A look at how the teams match up

Here’s a breakdown of how the Chargers (5-10) and Kansas City Chiefs (11-4) match up as they head into Sunday’s game at Arrowhead Stadium in Kansas City, Mo.

The most notable development that could happen Sunday is Mike Williams and Austin Ekeler both reaching 1,000 yards receiving on the season. Williams needs 37 yards and Ekeler 50 to join Keenan Allen in giving the Chargers three 1,000-yard receivers. That milestone has happened only five times in NFL history and once for the Chargers, in 1980. This team also should have incentive to run the ball coming off a 24-17 loss to Oakland, a defeat during which the Chargers rushed 16 times for only 19 yards. This could be running back Melvin Gordon’s final game with the franchise as he’s about to become an unrestricted free agent. This definitely will be Gordon’s final chance to sell himself and his skills to whatever NFL teams might be interested. What the Chargers do get on offense probably won’t come easily. In winning its past five games, Kansas City has permitted three touchdowns and 48 points. “I think early in the year, you could say the defense maybe looked like they weren’t on the same page,” Chargers coach Anthony Lynn said. “But right now … I think they’re playing their best ball at the right time.” The same can’t be said of the Chargers or, particularly, their offense.

In a Week 11 loss to Kansas City in Mexico, the Chargers largely limited quarterback Patrick Mahomes. He finished 19 of 32 for 182 yards with one touchdown and one interception. He rushed five times for 59 yards, which would be wildly impressive for nearly every NFL quarterback but not this particular one. Mahomes can be much more dangerous than that. The 59 yards on the ground marked his career high, but the 5.69 yards per pass attempt marked a career low. Back then, Mahomes was still dealing with a knee issue that cost him two games. He appears to be healthier now, and the Chargers have noticed. “They’re doing some more sprint-out pass with Mahomes getting out of the pocket some, and he’s been effective there,” defensive coordinator Gus Bradley said. “They’re playing on all cylinders. They’ve got all their threats, multiple receiving threats. The running backs do a good job.” The Chiefs are known for their crazy speed, led by receivers Tyreek Hill and Mecole Hardman. In the teams’ first meeting, Hill was injured early and didn’t return. Hardman had just two catches for 13 yards. Tight end Travis Kelce repeatedly burned the Chargers, however, with seven catches for 92 yards and a touchdown.

Kansas City’s Harrison Butker began the week on the injury report because of a glute problem. The kicker was a full participant throughout the week and is expected to play Sunday. Michael Badgley emerged as a reliable weapon in 2018 for the Chargers, but he has been barely noticeable this season after missing the first eight games because of a groin injury and then mostly watching as the Chargers have gone 2-5 since his return.

It would be nice to forecast a dramatic Chargers victory after the difficult season they’ve endured. But outside of an impressive victory over Green Bay in November, a solid overtime win against Indianapolis in the season opener and a narrow escape in Chicago in Week 8, there hasn’t been much to get excited about for this franchise. This final Sunday doesn’t figure to be any different, not against a talented Kansas City team ramping up for the playoffs. The Chiefs are still jockeying for seeding in the postseason as the Chargers are playing only to arrive at the offseason.