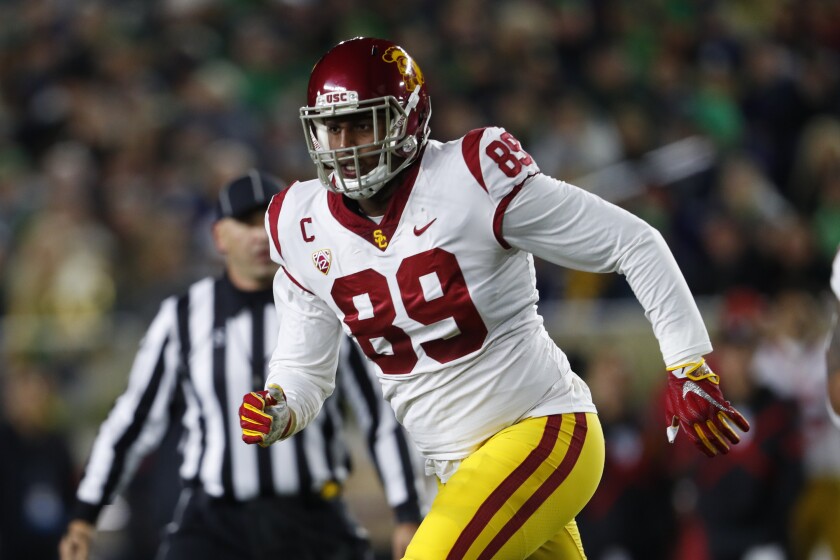 It was an agreement made out of necessity.

Christian Rector was not himself. That much was apparent. A high ankle sprain had sapped the senior defensive end of his usual effectiveness. He tried to gut it out, to play through the pain, but playing only slowed the healing process.

“I was doing him a disservice, and I was also doing the team a disservice by putting him out there,” USC defensive line coach Chad Kauha’aha’a admitted Tuesday.

So he and USC coach Clay Helton met with the senior captain after the Oct. 12 loss to Notre Dame and all three agreed: Rector needed time to heal.

He’s not the only one after last Saturday’s injury-riddled victory. Freshman Drake Jackson, USC’s other starting defensive end, is facing an extended absence with his own high ankle sprain. As is linebacker Palaie Gaoteote IV, who was still in a walking boot Tuesday.

Which makes Rector’s return, whenever that may be, all the more significant. The senior defensive end hasn’t practiced yet this week, and his status for Friday’s game against Colorado remains up in the air.

Even as Rector sat out and Jackson left early with his injury, a short-handed USC pass rush came alive last Saturday. Nine defenders registered at least a half-sack, including several rotational players, whom USC may have to rely on in the weeks to come.

“Some guys are going to have to step up, including myself,” said linebacker Hunter Echols, who officially got the start at defensive end last week in Rector’s place. “We’re going to go into Colorado, and we can’t hang our heads because we have some of our best guys out. We have to continue to go out there and show who we are.”

Echols, who is more of a hybrid edge defender as opposed to a traditional defensive end, offers USC scheme flexibility it probably would have used in the coming weeks, anyway, even if injuries hadn’t wiped out its defensive depth.

With both Rector and Jackson out, USC is likely to rotate its remaining depth at will. That means increased opportunity for reserves like Caleb Tremblay, who redshirted last season and now seems to be rounding into form.

Last week, Tremblay put together his best performance since arriving at USC, defensive coordinator Clancy Pendergast said. With the Trojans’ defensive line depth deteriorating fast and Rector still on the shelf, Tremblay couldn’t have picked a better time to step up.

“He gives us some juice out there,” Pendergast said. “He’s getting better and better.”

After dealing with lingering lower back pain for the last month that caused him to miss two of the last three games, cornerback Olaijah Griffin is poised to return Friday, just in time for a potential matchup with one of the nation’s most talented receivers.

Colorado’s Laviska Shenault Jr. has dealt with his own injury issues this season, after leading the Pac-12 in receptions a year ago. This season, with just 342 yards and two touchdowns to his name, Shenault isn’t even the leading receiver on his own team. But among USC’s secondary, his reputation precedes him.

“I think it’s going to be a great matchup,” Griffin said. “That’s a real first-rounder. He’s a big, physical guy and shoot, I’m just going to have to show him what I got.”

Along with Griffin, USC is expected to have its full cadre of young corners available Friday. Greg Johnson (shoulder) and Isaac Taylor-Stuart (ankle) have both practiced this week and are expected to play.